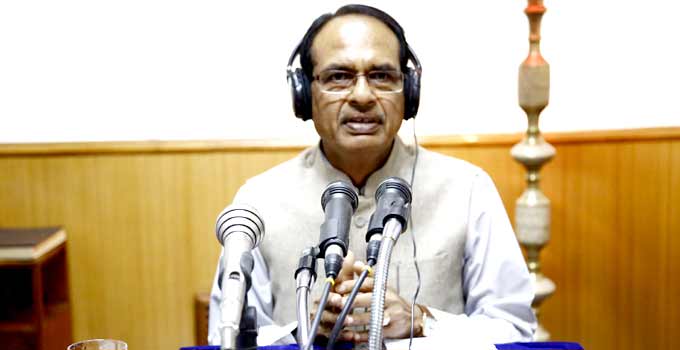 Bhopal : The Chief Minister Shri Shivraj Singh Chauhan has urged the youth to take resolve for building a new India free from terrorism, corruption, poverty, communalism and casteism. He said that meaningful life is far more important than successful life. He was talking to the youth on AIR and Doordarshan in the second edition of Dil Se programme today. In the first edition of ‘Dil Se’ Shri Chouhan talked to the farming community. Shri Chouhan said that future of the youth will never be allowed to ruin as they are the future of the state and the nation.

The Chief Minister gave young listeners many valuable learnings. Always respect parents. Respect the ancestors. Respect teachers as they build life. The government is always supportive but stay self-motivated. Everyone has talent. The only question is how talents are manifested. Be positive and think positive as it is reflected in personality.

Stay Away from BlueWhale

Talking about the ill-effect of BlueWhale like imaginative computer games, he urged the youth to avoid such games saying that such games spoil life. Simply, know potential within. Never be disappointed. Always stay energetic. Do not be disturbed by life’s ups and downs. All possible help would be extended by the government, he said.

Shri Chauhan said that it requires self confidence to do great things. Focus on carefully decided goal. Be determined to achieve it and draw out a roadmap of achieving the goal resorting to hard work. Success is good but living a meaningful life is far better. Shri Chauhan referred to some inspiring episodes from the lives of Mahatma Gandhi, Pandit Deendayal Upadhyay and Prime Minister Shri Narendra Modi.

Giving example of ‘Three Idiot’ film Shri Chauhan counseled the youth to avoid mugging. Always try to understand the fundamentals. Natural manifestation of talents is possible. He also urged the parents to have affection for their wards without exerting pressure on them.

The Chief Minister said that several initiatives have been taken to make studies accessible and affordable like free text books, uniform, cycles, scholarships, laptop to meritorious students, smart phone etc. A daughter living in rural areas scores more than 60 percent marks can have Rs. 5000 per year for collegiate studies.

Shri Chauhan said that school of excellence has been opened in every block. After opening of Gyanodaya Vidyalayas now Shramodaya Vidyalayas are being opened for the children of labourers.

Referring to the Chief Minister’s Scheme for Meritorious Students, Shri Chouhan said that the government will pay the fees of the students who get more than 75 percent marks in the twelfth board and are able to get admission in national institutes. He mentioned names of some students whose fees would be borne by the government. They include Shri Suyash Namdev -IIT Kharagpur, , Shri Pawan Mandloi-Sri Arvindo Institute of Medical Sciences, Sushri Shubhangi Bagre, School of Planning and Architecture, Bhopal, Sushri Anugya Mukati-NLIU, Bhopal, Sushri Jasmine Patel of Gorgaon of Rewa -MGM Medical College Indore, Sushri Kiran Aapte, Indian Institute of Information Technology, Bhopal. He said that the hard work of such talented youth will always be fruitful. He urged the youth to take advantage of these schemes.

Shri Chauhan also mentioned Sehore’s Preeti Methal who studied herself taking tuitions and cracked the U. P.S. C and now serving as Rewa district collector. He said that youth can scale new heights with a little passion and enterprise. The Chief Minister also talked about sports talents who got training from Sports Academies and have earned name and fame for the state.

Referring to the Skill India Mission, the Chief Minister said that transfer of skills to young population can help overcome unemployment problem. Talking about Madhya Pradesh Skill Development Mission, he said that ITIs of Excellence are being set up at Divisional Headquarters. Every year, seven lakh youth will be given job-oriented training. Global Skill Park is being set up at Bhopal in collaboration with Singapore. It will benefit thousands of young population.

The Chief Minister urged the youth to become job creators and not job seekers. He asked them to take advantage of Chief Minister’s Self-employment scheme, Chief Minister Yuva Udyami Yojana, Chief Minister’s Scheme for Economic Welfare. Saying that the youth have a major role in expansion of small and cottage industries. The government will guarantee their loan. He mentioned many young entrepreneurs who are now well-settled in business like Shri Rajat Tamrkar of Seoni, Shri Anurag Sodani of Sehore, Smt. Madhuraj of Jabalpur, Shri Rajeev Bhilware of Gwalior, Shri. Durgesh Dhurvey of Jabalpur, Shri Shailendra Dhakad of Neemuch.

Shri Chauhan exhorted the youth to find time for the society and voluntarily chose at least one task. He mentioned Bhopal’s 11-year-old Muskan which is running a library for the poor children in slum area. He said that tasks may range from collecting toys for the poor children to plantation, joining save river campaign, Narmada Mission. Referring to the campaign to save the rivers started by Sadguru Jaggi Vasudev, he said that it can be joined. Campaign against alcoholism may also be joined.

Referring to the birthday of Prime Minister Shri Narendra Modi on September 17, the Chief Minister said that this day the youth can dedicate themselves to cleanliness to celebrate the occasion. The task of building of new Madhya Pradesh for a new India is going on. It is a collective responsibility.

Shri Chauhan sought suggestions from the youth on MP.MyGov MP App. He also mentioned the names of those who gave suggestions for improving governance, schooling, promoting eco tourism and other issues. He also referred the humanitarian initiative of singer Palak Muchhal and said that bearing the expenses of treatment of 1000 poor children suffering from heart ailments is praiseworthy. It is a glaring example that inspires the youth to live for the society.

The Chief Minister said that Chief Minister IT Skill Center will be set up at the district level ITI, Polytechnic, School of Excellence. It will help students acquire basic IT skills and these centers could also be used for online examinations.

The Chief Minister said that a scheme would be launched for school children in which, they will visit Excellent Science Institutes of the country. It will develop scientific temperament and learning. Under the scheme educational tours would be conducted for reputed science institutes such as ISRO, Bhabha Atomic Center, Hindustan Aeronautics Limited, AIIMS and IITs.

The Chief Minister informed that the differently able sports persons winning medals for the state in national competitions will be given direct employment in the government services. He also sought suggestions from the youth for improving the plans, policies, administrative procedures. He said that suggestions could be given on his Twitter, Facebook, Shivraj Singh Chauhan App, MP.MyGov.in.