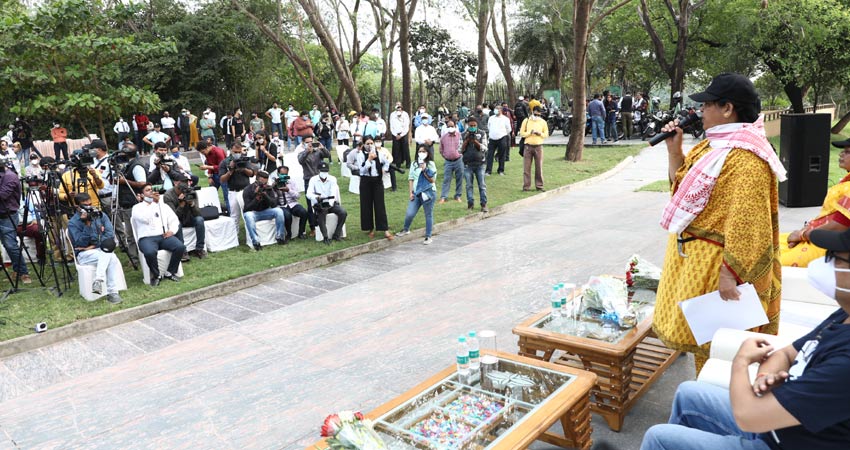 Bhopal : Tourism Minister Sushri Usha Thakur said that if there is undaunted, fearless and safe tourism anywhere, it is in Madhya Pradesh, the heartland of the country. She said that special innovations are being made by the Tourism Department to promote tourism in the state. “Tigress of the Trail” is one such unique innovation in which our women bikers will enjoy visiting all the national parks. They will also promote tourist places on the other hand.Minister Sushri Thakur flagged off the first women’s biking trail organized by the Madhya Pradesh Tourism Department aimed at promoting adventure and safe tourism in the state. MLA Sushri Nandani Maravi and Principal Secretary Tourism Shri Shiv Shekhar Shukla were also present on the occasion.

Minister Sushri Thakur said that all the innovations in the field of tourism should be implemented effectively with a unique message not only in the state but also in the entire country. She said that Prime Minister Shri Modi and Chief Minister Shri Shivraj Singh Chouhan are committed towards daughters, perhaps Madhya Pradesh has created so many dimension for the safety of women that other states are not even thought of. Minister Sushri Thakur said that Matrushakti is the Aadhar Shakti (power base) of the nation, it is the Nirman Shakti of the world. When she commits she turns challenges into opportunities. Minister Sushri Thakur said that girls are the pride of the nation, only cultures and empowered daughters form a strong foundation for the nation. She said that the problems caused due to Covid-19 in the field of tourism will have to be overcome through such innovations to take tourism to great heights. This journey of women bikers will also define the good governance of Madhya Pradesh that girls can move safely and fearlessly in Madhya Pradesh.

Principal Secretary Shri Shiv Shekhar Shukla said that by taking the decision to organize such an event in such a dismal atmosphere due to Corona, the Tourism Department has paved a new way amidst challenges. There is immense tourism potential in the state. He informed that the first women’s biking trail “Tigress of the Trail” is an innovation in which the fame of tourist destinations of the state will be further enhanced. These women bikers will not only enjoy tourism but will inspire other women to come forward whichever way they pass. The Principal Secretary said that this is the first ride being organized in Madhya Pradesh for women bikers, which will promote and propagate tourism of the state through their visits to the tourism destinations of Madhya Pradesh from November 19 to 25.

Principal Secretary Shri Shukla said that Madhya Pradesh is now fully open to tourism. Any tourist can move around anywhere in the state without any obstructions, their safety is the responsibility of the state government. A network of improved health facilities has been laid down all over the state, so that no one is subjected to inconvenience. This message will be spread by the women bikers during their excursion. All these women bikers will serve as brand ambassadors for the state. This will enhance the national and international fame of Madhya Pradesh. The Principal Secretary said that the women bikers will spread the message of safe atmosphere in Madhya Pradesh by visiting tourism destinations of the state covering 1500 km in six days.

Women biker Sushri Meenakshi said that this is the first women bike ride being held in various Madhya Pradesh. Girl riders from all over India including Madhya Pradesh are part of the group. Visit to various tourist places together in the same ride will be adventurous. Thanking the Tourism Department biker from Italy, Sushri Silvana said that there is an atmosphere of freedom and security for women in Madhya Pradesh. I am proud to be a part of this programme.

Women bikers will reach Madhayi from Bhopal and enjoy their evening jungle walk and boat safari. The next day, on November 20, they will reach Pench from Madhayi and enjoy Jungle Safari besides rural study, excursion and reviewing handicrafts. On Saturday, November 21, they will visit Kanha from Pench and enjoy jungle safari, tribal village excursion, tribal dance and bird watching. They will enjoy jungle safari, bonfire music and swimming on reaching Bandhavgarh on Sunday on November 22 from Kanha. On Monday, on November 23, they will visit Maihar for darshan of Maa Sharda and go on Panna Ken Riverside walk. On Tuesday, the 24th of November, they will reach Khajuraho from Panna, and will visit the World Heritage Site and Raneh Fall. On the same day, they will return to Bhopal from Khajuraho via World Heritage Site Sanchi and will tour round Bhopal on November 25.