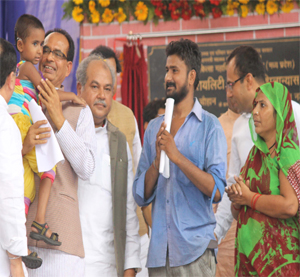 Bhopal : Neha, a 5 year old girl child was not able to hear and speak anything as she was a hearing and speech impaired child since birth. It is obvious that she was not able to express her feelings and emotions to anyone. Her medium of expressions were a few signs which had been taught by her mother and father.

Daily wages labourer, Sonu Prajapati, a resident of Gwalior when blessed with a girl child, named her Neha. As the time passed, Neha started crawling and then began walking and gradually taking small small steps but could not utter any words, not only this she was not able to hear what others said. This aggravated the family’s worries and after consulting the doctor,they came to know that Neha is a Divyang (Hearing and speech impaired child). The Doctor advised them that cochlear implantation will help Neha speak and hear like any other normal child. When Sonu came to know about the expenditure of Rs. 6 lakh on implantation, he felt the ground slipping under his feet. The arrangement of such a huge amount was like a dream to him.

Sonu Prajapti made tireless efforts for Neha’s treatment but disappointment was all that he got. The matter is about one and half year old. The Chief Minister Shri Shivraj Singh Chouhan came to know about this through media. He immediately rang the Collector Gwalior and told him for Neha’s cochlear implantation under the ‘Mukhya Mantri Bal Shravan Yojana’, The collector after getting in touch with Sonu got the case prepared. She was successfully operated at ‘Divya Advance ENT Clinic, Bhopal. An amount of Rs. 6 lakh 50 thousand on Neha’s treatment was incurred by the State government.

Sonu along with his daughter met the Chief Minister Shri Chouhan to express gratitude towards him when the Chief Minister visited Gwalior to lay the foundation of super specialty hospital. The Chief Minister held Neha in his arms, pampered her and provided an economic assistance of Rs. 50 thousand. This amount was deposited in the fixed deposit bank account opened in the name of Neha.

After the cochlear implantation, the speech therapy of Neha is being carried out at the expense of the Government. Sonu Prajapati says, he was amazed to hear the first word ‘Mama’ from his daughter. Now she has started uttering words like Mummy-Papa, paani, roti and sabzi. Since the day the Chief Minister, Shri Chouhan held her in his arms, Neha has started recognizing him as Mamaji.

During the Jan Sunvai, Sonu reached the Collectorate with Neha and asked help from the Collector by expressing the need for continuation of Neha’s speech therapy further. The Collector gave instructions for the continuation of the speech therapy through Jila Divyang Punarwas Kendra. He further added that Neha will not remain an ordinary child but will be made ‘the Brand Ambassador’ to encourage hearing impaired children.