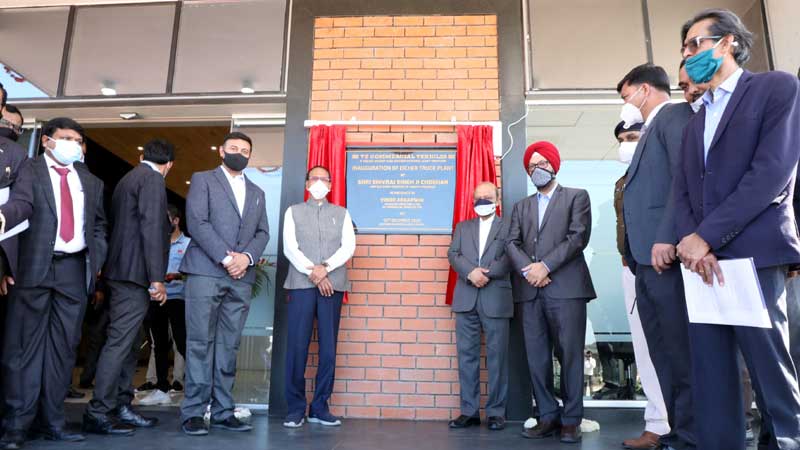 Madhya Pradesh will be made the logistics hub of the country:CM Shivraj Singh Chouhan

Bhopal : Chief Minister Shri Shivraj Singh Chouhan today inaugurated the Eicher truck plant at a cost of more than Rs 500 crore in Bagroda industrial area of ​​Bhopal district. The plant has been set up in 128.02 hectare in a new industrial area being developed near Bhojpur Road, 30 kms from Bhopal. Chief Minister Shri Chouhan said that this truck plant is an important step towards Atmanirbhar Madhya Pradesh. Congratulating the Eicher Motors and Volvo A.V. group’s joint venture, V.E. Commercial Vehicle Limited, he hoped that another such plant could be set up soon. Chief Minister Shri Chouhan said that balance between industrial development and environment is very important. This truck plant is an ideal example of the use of innovative technology and environment protection.

Chief Minister Shri Chouhan said that this area will be developed like Pithampur and Mandideep industrial area. We consider industrialists as supporters and friends. All essential facilities have been provided under the Industry Friendly Investment Policy which will be provided in future also. New units will get more and more support. For investment promotion, other industries will be made partners along with Madhya Pradesh government. This will open the door to prosperity. We all will together build Atmanirbhar Madhya Pradesh. Chief Minister Shri Chouhan hoped that the dream of a magnificent and prosperous India will be realized under the leadership of Prime Minister Shri Modi in which industries will play an important role. Efforts will be accelerated to make Madhya Pradesh the logistics hub of the country. Chief Minister Shri Chouhan also visited the Operation Excellence Hall of the plant. He also planted saplings in the plant premises.

Industrial Policy and Investment Promotion Minister Shri Rajvardhan Singh Dattigaon said that this plant is most modern and after Pithampur and Dewas, investment near Bhopal city will facilitate movement of the plant’s workers. In his welcome address, Eicher Foundation’s, CEO and Chairman Shri Vinod Agrawal said on the behalf of his company that Chief Minister Shri Chouhan is always striving for the development of industries.

The company has developed a total capacity of one lakh 30 thousand trucks in the state with 90 thousand truck manufacturing capacity of this plant in Bagroda industrial area. Earlier, ​​investment was being considered in Karnataka, but in view of the pro-industrial climate in Madhya Pradesh, it was decided to set up this plant near Bhopal and Mandideep. Shri Agrawal expressed the hope that this industrial area would develop rapidly. Among those present in the launching programme of the plant were officials-employees of Eicher company as well as representatives of other industrial units.