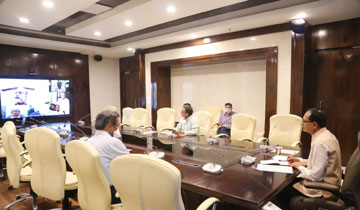 Bhopal : Chief Minister Shri Shivraj Singh Chouhan today sought suggestions in a discussion with officials of Indian Medical Association in a video conference on the works being undertaken for Corona control in state at Mantralaya. Shri Chouhan said that persistent efforts are being made at various levels to defeat Corona virus in the state. He said that till now the supply of PPE kits for t he doctors and paramedical staff engaged in Corona control was being arranged from outside the state. Now, the PPE kits are being prepared in the state itself after approval from Defence Research and Development Organisation (DRDO).

The Chief Minister said that about 10 thousand PPE kits are being prepare everyday in the state. The system of making them available to doctors as per requirements has been made more effective. He said that this will definitely help a lot in controlling the virus. Voluntary organizations, social workers have made a very good partnership with the government in the manufacture and distribution of masks.

Anand Department will play an important role in Corona control

Chief Minister Shri Chouhan said that focus would be given on making the Anand department, which is an important department, active in the work of Corona control. Attention will be given to providing light entertainment along with music and film in hospitals where Corona-infected patients are admitted, For this, Anand department will conduct necessary activities in association with social workers.

Public understands the importance of lockdown

Chief Minister Shri Chouhan said that the work of testing of Corona infection has increased in a big way in the state. Activities to enhance public awareness are picking up pace. Realizing the importance of lockdown, people have become serious about adhering to it. Shri Chouhan said that doctors are receiving significant support in disease control. We will definitely win.

Ayurvedic kadha will reach from door-to-door

Chief Minister Shri Chouhan said that to increase the immunity power of about one crore population of the state, Ayurvedic kadha will be delivered to their homes. Doses of homeopathic medicine have also been given to the people of the state to increase body immunity. Their use will continue in future also. The Department of AYUSH will play an active role in this work.

It is important to take fear out of people’s minds

Chief Minister Shri Chouhan said that it is necessary to get fear out of the minds of people that any kind of cold and fever can cause Corona. Use of words like chaos and catastrophe that increase the feeling of despair will also be controlled with the help of physicians, media colleagues and voluntary organizations.

Chief Minister Shri Chouhan said that the state government will implement important suggestions received from doctors. This includes increasing public awareness, increasing the use of tele-medicine, giving special treatment benefits to fever patients, use of meaningful apps and popularizing Arogya Setu App prepared by the Government of India. Shri Chouhan informed that Sarthak app has been prepared in Madhya Pradesh. In addition, a training model for Corona virus frontline workers is also being developed and will be implemented soon. The Chief Minister thanked the officials of the Indian Medical Association, who gave suggestions in today’s video conferencing. Describing the suggestions received as invaluable, he assured to implement them in a phased manner.

Dr. Mukul Tiwari: Telemedicine is more useful these days. Its use should be increased. Senior doctors must get facilities. Anand department must be activated and programmes should be organized to enhance happiness to prevent negative thoughts spreading among people due to Corona virus effect.

Dr. Pushparaj Bhatele: The Indian Medical Association stands with the state government. We will cooperate further in the efforts being made for disease control.

Dr. P.S. Chandel: Private clinics should be authorized for treatment, so that the treatment of fever patients become easier. All doctors should be covered under the insurance scheme.

Dr. Ravi Varma: The efforts of the state government are commendable. Senior doctors should not be on frontline duty and their services should be taken as consultants in the second line. Volunteers should be trained.

Dr. Sudhir Pathak: PPE kits and other equipments should be made available to doctors and other staff at concessional rates.

Dr. Arvind Jain: There should be proper sanitization arrangements in the private hospitals. No action should be taken on the referring physicians.

Dr. H.K. Singh: A separate app should be made for public awareness after the Arogya Setu app. B.C.G. vaccination is beneficial and should be continued. AYUSH treatment system should be used. Senior citizens should be involved in planning.

Dr. Tejinder: Public education work through social media must continue. Message will have to be spread to people to adopt a new lifestyle. There should be no place for negative news in the media. Interviews of patients who are recovering and returning home must also be published. Baseless media reports must not be entertained, so that the morale of people remains high.