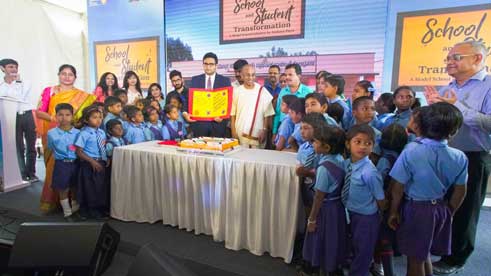 Bengaluru: The Akshaya Patra Foundation’s school rejuvenation programme, ‘School and Student Transformation – A Model School Initiative’ was launched by Maharaja of Mysuru, His Highness Yaduveer Krishnadatta Chamaraja Wadiyar at the Government Lower Primary School – Ravindranagar in Bengaluru on 13 December 2018.
The event was graced by M S Archana, I.A.S. – CEO, Bengaluru Urban Zilla Panchayat;
S Muniraju, President – Bengaluru Urban Zilla Panchayat; T G Narasimha Murthy – President, Sehayi Committee, Bengaluru Urban District; Lokesh N – BBMP Corporator – Jalahalli;
M R Maruthi – Joint Director, Mid-Day Meal, Dept. Public Instruction; C B Jayaranga – Deputy Director of Public Instruction – Bangalore North; and V Ramesh – Block Education Officer – North 1.
Indian film actress, Gouri G Kishan and playback singer, Vasuki Vaibhav were also present for the launch. The event was presided by Shri Chanchalapathi Dasa, Vice-Chairman, The Akshaya Patra Foundation.
Akshaya Patra aims to implement the Model School Initiative in 100 schools across India in the first phase and gradually scale up to 500 schools in the second phase. Schools have been assessed and shortlisted in rural and semi-urban areas of Bengaluru (Karnataka), Rourkela and Puri (Odisha), and Vrindavan (Uttar Pradesh) and will begin implementing planned activities on these schools in the coming months.
The objective of this initiative is to create an environment that will enhance the impact of education by focusing on infrastructural improvements, quality of education, and community engagement. It is the Foundation’s attempt to create a sustainable and replicable model that will serve as a template for other schools in the future.
On the occasion, Maharaja of Mysuru, His Highness Yaduveer Krishnadatta Chamaraja Wadiyar expressed his happiness at being present for the launch of this initiative. He said, “I am glad that Akshaya Patra, through its model school endeavour is helping create a positive environment in our schools. We know that a positive environment at the school translates into better academic performance of children. If such school rejuvenation programmes are implemented across the country, millions of children will benefit from them.”
Akshaya Patra has equipped GLPS Ravindranagar with a new compound wall, safe food storage facility, hand-wash stations, and zero maintenance bio-toilets as a part of the infrastructural upgrades. Additionally, CCTV cameras have been installed to make the premises safe and a kitchen garden has been developed, the produce of which will be used to prepare food for the anganwadi children in the school premises.
To facilitate a conducive learning atmosphere for the beneficiary children, a multi-lingual library has been added to the school infrastructure. An AV room has been set up with a projector to further the cause of digital literacy. To improve the English language skills of the students, the Foundation has also arranged for special classes.
A play area has also been developed for the children in the form of a sandpit and students will also learn yoga as a part of this initiative. Over the next year, Akshaya Patra will work along with the school authorities to carry out an enrolment drive in the catchment area of this school.
Akshaya Patra collaborated with Shyamala Prabhu and Kavita Shastry from the Institute of Indian Interior and organisations such as Let’s Endorse, Smile Charitable Trust, and The Aravani Art Project to implement the model school initiative at GLPS Ravindranagar.
Shri. Chanchalapathi Dasa – Vice-Chairman, The Akshaya Patra Foundation, said “Our vision was to build sustainable model schools which would serve as templates of excellence, where all-round development of the children would be the goal.” He further added, “it is heartening to see this vision materialize and expressed hope that this initiative will go on to serve as a development parameter for changes in national and state-level policies and further strengthen Akshaya Patra’s collaboration with the Government. We are thankful to the Government of Karnataka for extending their support to this endeavour and their continual support to our mid-day meal initiative.”
The dignitaries present at the event appreciated the initiative and its scope to provide a better life for children by providing them a favourable learning environment. They also expressed their willingness to extend their support to the same.
Akshaya Patra has always strived to explore new avenues and undertake initiatives across the country to further enrich the Mid-Day Meal Programme and contribute towards the holistic development of school-going children in India. In order to improve and ensure the nutritional and health status of children by providing them a diversified and nutrient-rich staple, the Foundation has opted for initiatives like standardization of recipes, menu diversification, millet integration, etc.
Similarly, initiatives which go beyond the meal programme have also been introduced to help beneficiary children. The Giving Every Dream a Chance initiative which was started to mentor beneficiaries with unique dreams, has now been scaled to Bangalore, Hubballi, Ballari, Ahmedabad, Hyderabad, and Jaipur. More than 3,500 children have benefited from this initiative so far. Over the next five years, the mentorship initiative will be scaled to provide mentorship to 100,000 children across the country in a phase by phase manner.
Scholarship programmes is another initiative started by Akshaya Patra to empower students and reduce school dropouts due to financial constraints. As a part of the same, scholarships are being provided to 1,500 beneficiaries and ex-beneficiaries across the country.
The Foundation has also implemented the Swachh Vidyarthi, Swachh Vidyalaya, Swachh Gruha initiative to inculcate a culture of cleanliness and personal hygiene among beneficiaries and communities.
With the Model School Initiative, Akshaya Patra is hopeful that it will be able to reach many more children with the promise of both, a nutritious meal and an enhanced learning environment over the next few years.