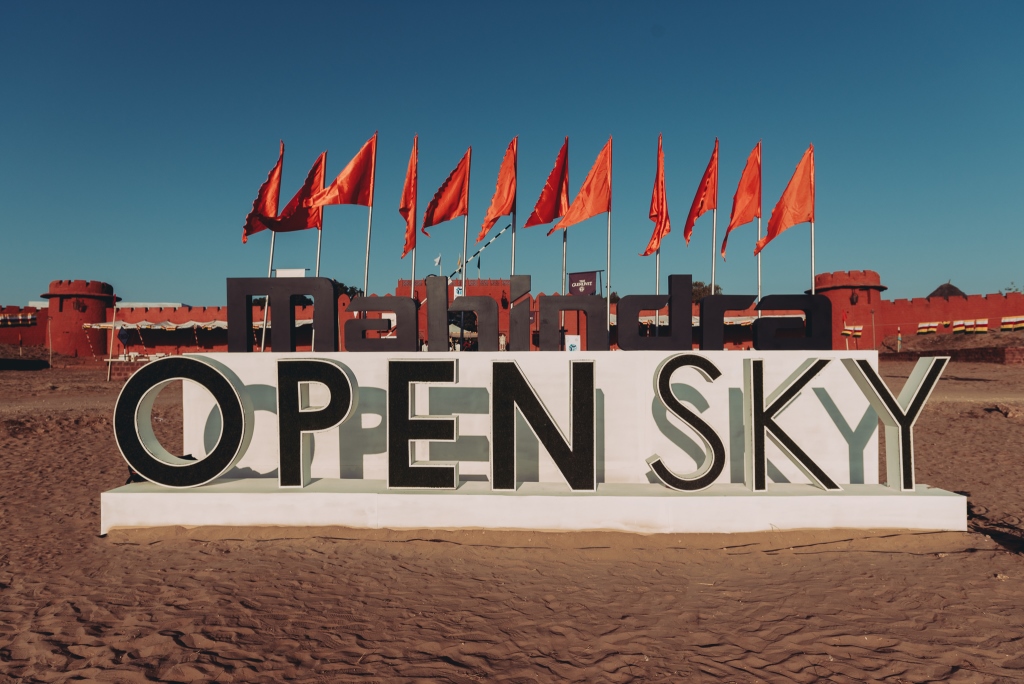 ‘Mahindra Open Sky’ unfolds on the Dunes of the Thar

The three-day festival, which began on November 24, 2017, came to a spectacular end on Sunday with some energising yoga and thrilling off-roading on the mighty Thar. Unfolding in an intimate setting in the midst of the dunes of the Thar Desert, the debut edition of this unique festival presented a specially curated line-up of Indian and international artists coupled with the unique experience of star gazing under the clear open sky.

“The first Mahindra Open Sky has been an absolute delight to plan and to see happy seekers promising to come back again leaves us with a huge sense of satisfaction. We are committed to creating enjoyable experiences where culture, adventure, astronomy and gastronomy converge against the backdrop of the mighty Thar,” said Jay Shah, Head, Cultural Outreach, Mahindra & Mahindra Ltd.

Mornings at the Mahindra Open Sky started on a healthy note with wellness sessions by Deepika Mehta, master trainer and yogini, energising mind, body and spirit for a heady day ahead.

The afternoons were spent off-roading in Mahindra UVs which gave visitors to the festival the opportunity to  see centuries-old temples the unique culture of proud local tribes such as the Bishnois and the Bhils, craftsmen including potters and weavers, and desert wildlife which included blue bulls, gazelles, foxes, peacocks and partridges.

Day one saw an eclectic performance by Donn Bhatt + Passenger Revelator at the Sundowners’ Session who performed a line-up of his hit songs including Connected, Stars Align, and Spinning World. The Mumbai based composer, producer, guitarist and vocalist crafted some of the most immersive audio experiences with his band, mixing electronic, pop and rock effortlessly as the audience sipped on champagne against the romantic background of the setting sun.

On the Dune Deck (main stage), When Chai Met Toast set the mood with their unique brand of infectious, happy music and a special acoustic set up. The Kochi boys enthralled the audience with their amazing rendition of A Beautiful World, Bum Bum Bhole and A Firefly, amongst other popular numbers.

Following them was one of the most sought after voices of India, Papon Live who, incidentally was also performing on his birthday! Beginning with the famous Assamese folk song, ‘Din dina’, the mega talented singer also treated the gathering to folks songs from Rajasthan, Punjab, Nepal and Uttarakhand, sweeping the audience off their feet. On popular demand, he also sang a few of his Bollywood hits like Tu Jo Mila from the movie Bajrangi Bhaijan, Kyon Na Ham Tum from Barfi, and Dum Laga Ke Haisha’s Ye Moh Moh Ke Dhage. The inimitable Nikhil D’Souzaperformed an eclectic set at the midnight acoustic session. His signature melodic tunes and soul-stirring voice kept the party going through the night. He performed a mix of songs from various genres, including Bollywood melodies like Sham Bhi Koi and Tujhko Jo Payaa, as well as Stop Staring and Silver & Gold from his international album. On day two, the rich soulful vocals of Sam Lewis at the Sundowners’ Session was a musical delight. His first performance at Mahindra Open Sky – also his first ever performnace in India – included Blues, Folk, Country music and a little bit of storytelling and ballads, giving the festival a distinctly American flavour. Anand Bhaskar Collective (ABC) took the audience completely by storm with their unique brand of Hindi alternative rock music, starting with Hindi chartbusters like O Pardeshi O Pradeshi, Urvashi Urvashi, Humma Humma and one song dedicated to Krishna and Radha, ‘O Re Radha’, in addition to their original song, Faasle. It was then time for a Mehfil with the multi-talented Piyush Mishra and his band, Ballimaaraan. The actor, lyricist, singer and screenplay writer was in his element, belting out hit numbers like Aarmabh Hai Prachand, Vo Raat Ke Musfir, and Ek Bagal Me Chand Hoga. He ended on a high note with Husna. Piyush also read poetry from his bestselling book, Kuch Ishq Kiya, Kuch Kaam Kiya.

There was a lot more to follow with Ayushmann Khurrana with his band Ayushmann Bhava getting the audience on their feet with their music and phenomenal stage presence. Ayushmann Khurrana sung some of his chartbusters, including Paani Da Rang, Saddi Gali, Mera Mann, Mitti Di Khushboo, amongst others.

A special ‘Camel Race’ that took place earlier in the day pumped up the adrenaline of visitors with speculation on the winner continuing till evening. After an eventful day on the dunes, unique star gazing sessions saw astronomy enthusiasts identify the constellations with the help of expert stargazers.

The Mahindra Open Sky Festival is promoted and produced by Oranjuice Entertainment.