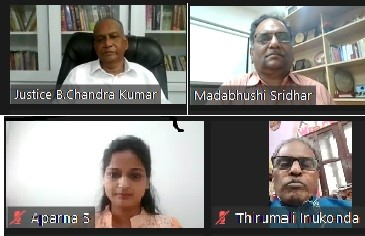 Mahindra University School of Law organized a webinar on “72 years of Constitutional Democracy: Merits and Demerits”

New Delhi: Mahindra University School of Law organized a webinar on Constitutional Law on the topic: 72 years of Constitutional Democracy: Merits & Demerits, on the occasion of 72nd Constitution Day. Justice B Chandrakumar, retired Judge of AP High Court and Prof. (Dr) Inukonda Thirumali, renowned academician, spoke on the occasion. Dean and Faculty from the School of Law, Mahindra University also addressed the webinar, which was available to students as well as external audience interested in the subject.

Taking part in the discourse on Constitutional Law, Justice Chandrakumar opined that the Indian citizens could vote out the then Government in power in 1977, when all other constitutional safeguards failed to check the mismanagement of power under the proclaimed National Emergency rule. He further said that Constitution is an incredible safeguarding document depending on who is handling it? He advised law students to understand the power of law as a weapon to judiciously help the people, who are deprived of justice. Justice Kumar exhorted the need for strengthening the constitutional institution and the abiding system to ensure that the fundamental rights of the citizens are solidly in place.

Speaking on the occasion, Prof. (Dr) Inukonda Thirumali talked about the strength of democracy within the Indian Constitution. He explained how the nation-state emerged from the functioning of the Constitution, which was preceded by the different phases of nationalism during the Independence movement. Prof. Thirumali also threw light on the fact that how and what the Indians demanded for and drafted their own Constitution.

In his concluding remarks, Prof Madabhushi Sridhar Acharyulu, Dean, School of Law – Mahindra University, said, “The Constitution of India is the basis of all governance in India, be it the rights or duties of citizen, or the basic political framework, structure and powers, or the duties of the Government institutions. All of these are explained in detail in the longest written constitution of any country. It is the collective responsibility of each one of us as individuals, as well as the political, executive and legislative branches to follow the constitution not just in letter but in spirit. It is when the constitution is not adhered to by any branch that the skirmishes or breakdowns of system creep in”.