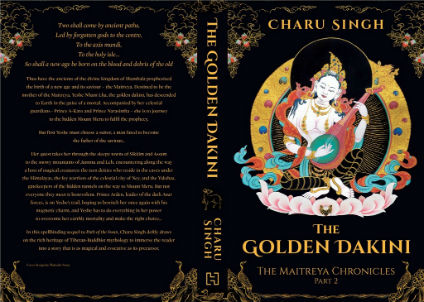 New Delhi: Bestselling author Charu Singh mesmerizing series “The Maitreya Chronicles” second book “The Golden Dakini” is scheduled to be launched at the Zee Jaipur Literature Festival on January 25th. Andrew Quintman, Associate Professor of Religious Studies, specializing in the Buddhist traditions of Tibet and the Himalaya, in the Department of Religious Studies at Yale will be in conversation with Charu Singh. In this spellbinding sequel to “Path of the Swan”, Charu Singh deftly draws on the rich heritage of Tibetan-Buddhist mythology to immerse the reader in a story that is as magical and reminiscent as its precursor.

Talking on the sequel, Charu Singh said, “The Golden Dakini was the second part of a beautiful journey through the mystery and splendour of Tibetan Buddhism. I was able to carry forward the story that began with the Path of the Swan and in this book I explored several new characters and concepts. I hope it gets as fulfilling for my readers as it was for me while writing it.”

Charu Singh’s debut novel Path of the Swan, part one of The Maitreya Chronicles, draws from the rich Mahayana culture of Buddhists and the chronicles are a surreal account of the same. She used elements of Tibetan Buddhism especially myths centered around the vajrayana system of Buddhism which is a part of the larger Mahayana body of Buddhism. She especially used the myth centered on the legendry kingdom of Shambala which is particular to Vajrayana Buddhism and is the subject of much debate and thought among monks and lay practitioners of this arm of Buddhism

The Golden Dakini, the book revolves around action building upto the birth of the divine child – the Maitreya Buddha. The divine kingdom of Shambala prophesized the birth of a new age and its saviour – the Maitreya. Destined to be the mother of the Maitreya, Yeshe Nam Lha, the golden dakini, has descended to Earth in the guise of a mortal. Accompanied by her celestial guardians Prince A-Karo and Prince Narasimha, she is to journey to the hidden Mount Meru to fulfil the prophecy. But first Yeshe must choose a suitor, a man fated to become the father of the savior.

Her quest takes her through the sleepy towns of Sikkim and Assam to the snowy mountains of Jammu and Leh, encountering along the way a host of magical creatures: the tsen deities who reside in the caves under the Himalayas, the fey warriors of the celestial city of Ney, and the Yakshas, gatekeepers of the hidden tunnels on the way to Mount Meru. But not everyone they meet is benevolent. Prince Arden, leader of the dark Asur forces, is on Yeshe’s trail, hoping to bewitch her once again with his magnetic charm, and Yeshe has to do everything in her power to overcome her earthly mortality and make the right choice.

Mythology has been intrinsic tool of storytelling and for the first time fantasy and fiction has found imagination in Tibetan Buddhism. The Golden Dakini is available on Amazon and leading Bookstores around the country.

​​‘Balanced and Adaptive Agreement to be designed to strengthen the EPC Projects’, Dr SK Joshi

iednewsdesk Jul 31, 2021
“I am delighted to be able to inaugurate the new supercomputer today. With HoreKa, we not only strengthen…