New Delhi: As part of ‘Azaadi ka Amrit Mahotsav’, on the occasion of 75 years of India’s independence, Ministry of Information & Broadcasting (MIB) is launching a series of e-photo exhibitions, for an entire year, on various aspects of the freedom struggle, out of which the first one is on ‘Making of the Constitution’. The virtual exhibition was inaugurated today in New Delhi.

The exhibition is available at https://constitution-of-india.in/ 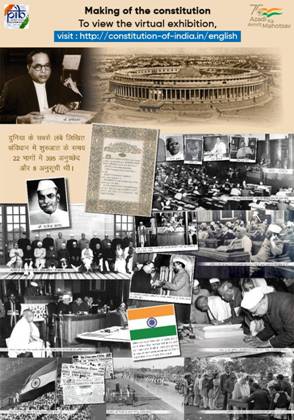 National Flag Adopted (22 July, 1947)-The National Flag of India was adopted during a meeting of the Constituent Assembly held on 22 July 1947, and it became the official flag of the Dominion of India on 15 August 1947. The Flag of India constitutes of tricolour, i.e., saffron, white and India green; with the Ashoka Chakra, a 24-spoke wheel, in navy blue at its centre.

Independent India (15 Aug, 1947)– On this day, the power from British Empire was handed over to India, through the cooperation of several freedom fighters whose efforts made independence a reality for India.

When Constitution came into force (26 Jan, 1950)-The Constitution replaces the Government of India Act 1935 as the country’s fundamental governing document and the Dominion of India became Republic of India.

First General Election (1951-52)-General elections were held in India between 25 October 1951 and 21 February 1952. They were the first elections to the Lok Sabha after Independence in August 1947.  It was conducted under the provisions of the Indian Constitution, which was adopted on 26 November 1949.

The e-Photo Exhibition also has an additional interactive/engaging Quiz comprising a set of 10 questions to enhance engagement of the readers and ensure ‘Janandolan through Janbhagidari’ of the citizens.

The link for the same is available on the websites of MIB, BOC, PIB, DD, AIR and regional offices of the MIB and other websites of different ministries. The links will be available to local universities, colleges, schools by Regional PIB/ROB offices besides promoting them on their respective social media platforms