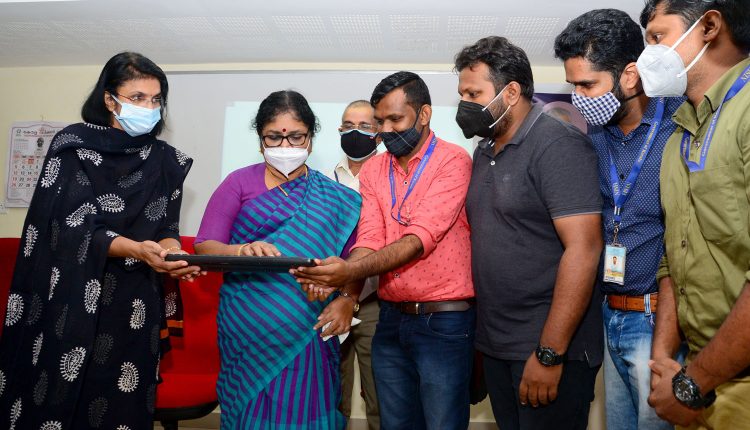 Thiruvananthapuram : Releasing the first uniform sign language alphabet in Malayalam developed by Deaf Indian Sign Language (ISL) experts here today, Minister for Social Justice and Higher Education Dr R. Bindu said the uniform alphabet would bring about a qualitative change in the lives of the hearing-impaired, and promised to look into its use in special schools.

“Discussions will be initiated with the General Education Department regarding the use of Malayalam alphabet in sign language in special schools across the state,” Dr Bindu said while releasing the sign language alphabet developed by the National Institute of Speech and Hearing (NISH) in collaboration with All Kerala Association of the Deaf.

The event coincided with the International Week of the Deaf, observed in the last week of September.

“This is a proud achievement of Social Justice Department and NISH. It is the result of the dedicated effort of NISH, taking into account the difficulties of the hearing-impaired, who communicate by making gestures with their hands in the air. Currently, English and Hindi have alphabets in sign language. The newly developed alphabet in Malayalam will open up immense possibilities for the deaf community,” the Minister noted.

University of Western Australia: Learn more about the…

NISH Executive Director Ms M Anjana, IAS, said, “the development of the sign language in Malayalam is a significant achievement that addresses a long-felt void. The hard work and dedication of deaf teachers and alumni of NISH and experts in this field have played a vital part in the initiative.”

NISH’s Centre for Assistive Technology and Innovation Director Dr K.G. Satheesh Kumar, said, “Like other global languages, sign language is an independent language. With the advent of Malayalam alphabet in sign language, the hearing-impaired will be able to read and write Malayalam.”

The Malayalam alphabet, consisting of vowels and consonants, is fingerspelled in sign language. Its primary phase has been designed exclusively for the deaf schools across Kerala. The new sign language alphabet in Malayalam will eliminate the challenge of teachers in conveying messages through lip movement.

NISH is planning to incorporate the uniform fingerspelling into the curriculum for the hearing impaired with the support of the State Council of Educational Research and Training.Teachers, staff and other officials of NISH also attended the function.

University of Western Australia: Learn more about the mysteries of the universe on…

iednewsdesk Oct 28, 2021
A prominent breast cancer surgeon, a scientist who has helped improve knowledge about how the immune system makes…

Ural Federal University: Scientists Have Improved the Composition of…