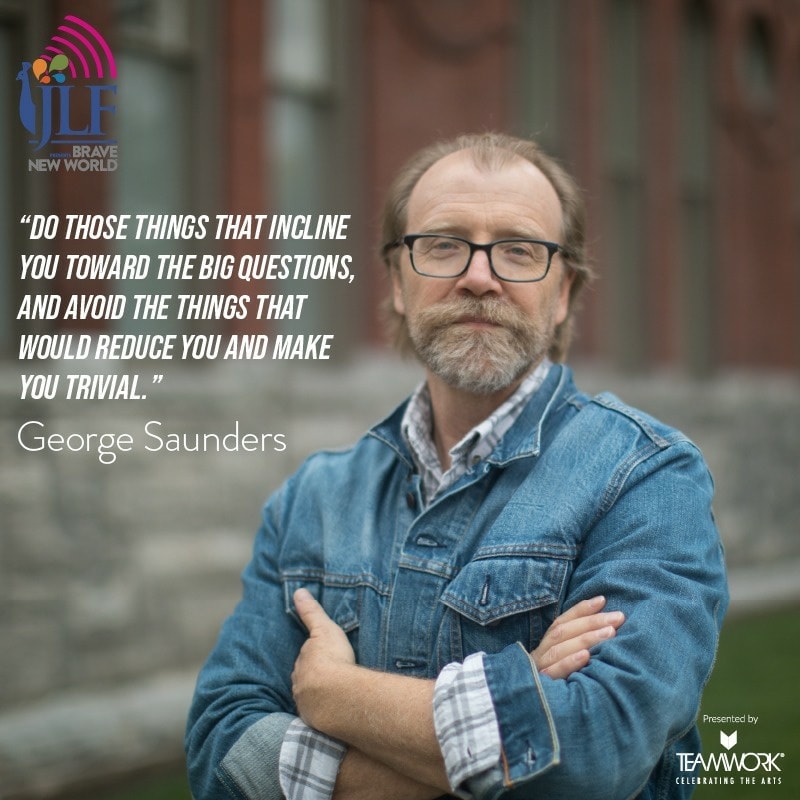 New Delhi: Teamwork Arts, the producer of the iconic Jaipur Literature Festival, launched JLF Brave New World a few months ago, as the world went into lockdown grappling with a global pandemic. JLF Brave New World celebrates the power of literature in bringing together communities, a vital need in the de-globalised world created by Covid-19. Since its inception in April, the series has come a long way in a mere four months, witnessing some of the best conversations of current times with a diverse range of speakers. The series will soon celebrate its 100th milestone episode on Wednesday, 29th July 2020, with an extended celebratory evening featuring leading contemporary authors and speakers.

In this special episode, Man Booker Prize-winning author of Lincoln in the Bardo, George Saunders will share insights into the mosaic of his prolific life and genre-bending body of work. In conversation with writer Amitava Kumar, Saunders, the master of modern fiction, will discuss the state of contemporary literature, its relation with power and politics, and the place held by darkness and kindness in stories.

Stephen Fry is one of the world’s best-known actors and comedians. But when he arrived at Cambridge, he was a convicted thief, an addict with a failed suicide attempt, and convinced that he would be expelled. Instead, university life offered him love and the chance to entertain. He befriended bright young things like Hugh Laurie and actress Emma Thompson. On Friday, Fry talks about his life and work with Mint Lounge editor Anindita Ghose as he tells the hilarious and compelling story of how he took his first step in the worlds of theatre, radio, television and film.

The next session will feature celebrated Zoroastrian novelist Bapsi Sidhwa speaking to writer and feminist publisher Urvashi Butalia about her creative journey across cultures, continents and chronicles, and what she calls her ‘Punjabi-Pakistani -Parsi’ roots. Her novels ‘Ice Candy Man’ and ‘Water: A Novel’ were adapted by Deepa Mehta for acclaimed films like ‘Earth’ and ‘Water’. A biopic – ‘Bapsi: The Silences of My Life’ – is currently in production.

Multinational corporations are being shut overnight with a single tweet, Facebook has grown bigger than any state, robots are battling for elections, coders and hackers are writing policies, and algorithms are shaping our lives in more than unimaginable ways. On Saturday, Carl Miller, co-founder of the Centre for the Analysis of Social Media and author of the Transmission Prize-winning ‘The Death of the Gods’ that analyses the trajectory of power in the digital age, delves into how this power is indeed being transformed, fought over, lost and won in the digital medium, at this timely and incisive session.

Writer and translator Paulo Lemos Horta has written on the cultural and literary history of the ‘Arabian Nights’ and of the travellers, translators and storytellers who gave the world these unforgettable tales in his ‘Marvellous Thieves: Secret Authors of the Arabian Nights’ and Aladdin: A New Translation’. In ‘Aladdin’, Horta takes us on a dazzling journey, interweaving and reinventing the dark themes and enchanting whimsy of a classic that has transfixed us for ages. In conversation with Jaipur Literature Festival & JLF producer Sanjoy K. Roy at the week’s concluding session, Horta speaks of the stories, along with the stories behind the stories, to provide a fascinating glimpse of the great cultural reservoir of Arabic, Persian and Indian narratives.

Sessions at JLF Brave New World include conversations with speakers as well as Q&A picked from social media channels where audiences can submit questions and share comments with their favorite speakers. The full archive of past sessions, as well as a list of upcoming sessions of the series, can be accessed via the #JLFLitfest social media pages on Facebook, Twitter, and YouTube.