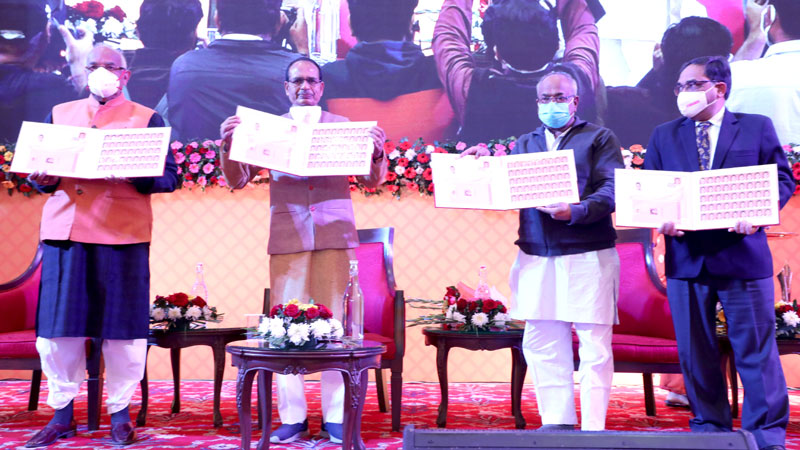 Bhopal : Chief Minister Shri Shivraj Singh Chouhan has said that renowned journalist Mamaji Late Shri Manikchandra Vajpayee, was a Karmayogi, a patriot, egoless and with personality of as deep as ocean and as high as a sky. The National Award instituted for distinguished journalism by the Government of Madhya Pradesh in his name will be re-started. The award was discontinued by the former government.

While continuing the journalism award after Shri Rajendra Mathur, the Government of Madhya Pradesh will give the award named after Mamaji also as earlier. Chief Minister Shri Chouhan was addressing the postage stamp unveiling ceremony organized by the Public Relations Department at Minto Hall Bhopal today on the birth centenary year of Mamaji Manikchandra Vajpayee.

On this occasion, Chief Minister Shri Chouhan threw light on the personality and activities of Mamaji. He said that former Prime Minister Bharat Ratna late Shri Atal ji also respected Mamaji. Atal ji was very moved at the time of Mamaji’s demise. Mamaji’s life of total dedication was a source of inspiration to lakhs of workers and hundreds of journalists. Chief Minister Shri Chouhan quoted the qualities of an ideal man from the Gita through shlokas, saying that Mamaji had created a distinct identity through the saga of struggle in Emergency and other epics. He developed many talents. He was simple, , easygoing, devoted and self-respecting. He was man of an extraordinary personality. Chief Minister Shri Chouhan described the event organized by the Department of Posts and Public Relations Department on the birth centenary year of Mamaji as commendable.

Presiding over the programme, former Governor of Haryana, Tripura Prof. Kaptan Singh Solanki said that throughout his life, Mamaji lived for the society. He was source of inspiration. He rendered significant services to the organization. He was imprisoned during emergency. Prof. Solanki said that Mamaji contributed in deciding the direction of his life also. He worked with dedication for the concept of “Ek Bharat Shreshtha Bharat”. Considering his merit, he was also given the Dr. Hedgewar Pragya Award. Mamaji was in favour of ideological change in the society. He also worked persistently for this purpose.

Keynote speaker and National Organizing Secretary of Sahitya Parishad Shri Shridhar Paradkar said that Mamaji set an example of his extraordinary activities through his specific works. He wrote an amazing book by interviewing about seven thousand people from communities displaced due to freedom struggle and partition of the country. Apart from this, he also scripted the Madhya Bharat Sangh Gatha.