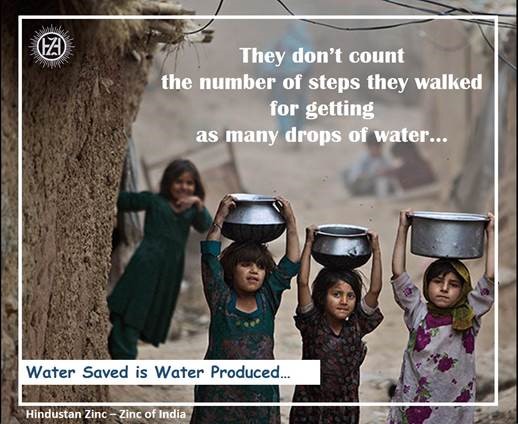 Udaipur: Chutki has to get-up every morning at 4:30 am, not to get ready for school, but to help her mother fetch water about 5 km away from a water reservoir. 5 km means about 15,000 steps for her. She is not alone, her friends have the same routine. More than attending school, they have to somehow get water. Challenge does not end here. When they reach water reservoir, they have to stand in a queue with many others.

And here we do not think for even 5 seconds before wasting such a precious natural resource. Actually, we find no reason to save water. We get it easily so we waste it even more easily. We can afford it, does not mean we can misuse it. There are only few left in India that get and use about 300 liters per day, but there are millions and millions who form a queue for 3 liters of drinking water every morning.

No doubt, we are living on a planet which has 71 % of its surface as water. But this mammothness of oceans only creates an illusion of plenty of drinkable water.

Taking about Rajasthan, the State is sinking into water crisis every day. 13,500 villages do not have access to safe drinking water. The State has the country’s 10 % land mass but only 1.1 % surface water, making it almost completely dependent on ground water which is fast depleting. What’s worse is that only 10% of wells have water that is safe for drinking. 88% of Rajasthan’s water is saline and 55% has high fluoride. Currently, Rajasthan has the lowest per capita availability of water with 807 m3 per person water. This is set to further decrease to 457 m3 by 2045.

Recently, NITI Aayog released a report which states that India is facing its worst water crisis in history and if no action is taken to address this, the demand for water would far beat its supply by 2030. In fact, even by 2020, it is expected that 21 Indian cities will run out of groundwater. The NSSO data shows that 70% of the rural women from states such as Chhattisgarh, Manipur, Odisha, Jharkhand and Rajasthan, travel a minimum of 30 minutes to collect water.

Just use only as much water as you require. Don’t have this myth that today’s drinking water cannot be used tomorrow or even day after. It is still fresh to drink. Instead of being casual on saving water, just be a little cautious and conscious.