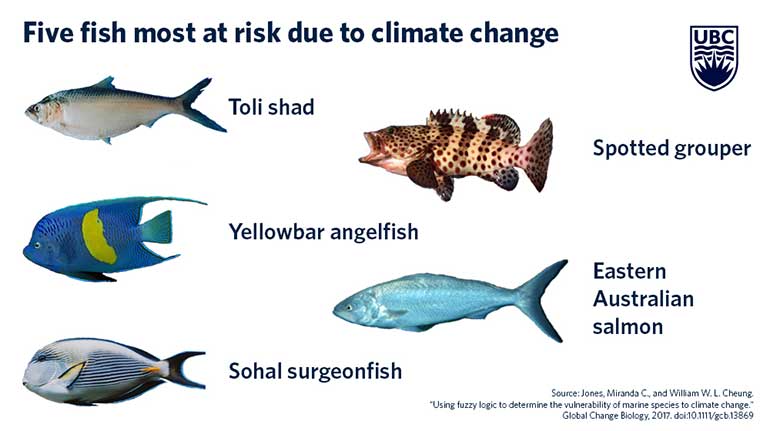 Some marine species more vulnerable to climate change than others

Certain marine species will fare much worse than others as they become more vulnerable to the effects of climate change, a new UBC study has found.

After analyzing the biological characteristics of 1,074 marine fish and shellfish, the study identified 294 species that are most at-risk due to climate change by 2050. Species most at-risk include the Eastern Australian salmon, yellowbar angelfish, toli shad, sohal surgeonfish and spotted grouper.

“We hope that this study will highlight the marine species that are most in need of management and conservation actions under climate change,” said William Cheung, associate professor in the Institute for the Oceans and Fisheries and director of science for the Nippon Foundation – UBC Nereus Program.

As part of the study, UBC researchers created a database that examines the long-term vulnerability of marine species that are important to fisheries around the world. The database was developed with an approach that uses “fuzzy logic” to combine information about the biological sensitivity of these species to environmental changes as well as their projected exposure to changes in the ocean including temperature and oxygen and acidity levels.

“How susceptible are Atlantic cod to climate change compared to skipjack tuna? How about smaller fishes such as anchovy and pilchard?” asked Cheung. “We know that some characteristics of the species make them more sensitive and less resilient to climate change.”

The factors that restrict whether fish or shellfish can adapt to climate change include their preferred temperature range, restrictions on their geographic range, how long it takes to reproduce, and specific habitat requirements such as needing kelp or coral reef to survive.

“Eastern Australian salmon is highly vulnerable because their distribution is limited to shallow coastal and estuarine waters in southern Australia and New Zealand,” said Miranda Jones, the study’s lead author, who was a postdoctoral fellow in the Institute for the Oceans and Fisheries when the study was underway. “The species lives in habitats that are exposed to large changes in ocean conditions and have limited scope to avoid these changes.”

In Canada, sockeye salmon, along with the alewife, Pacific bonito, and sharks such as the porbeagle and thresher, are identified as at risk to climate change impacts. In contrast, some species such as the Pacific sanddab, blue crab and Pacific sandlance have less vulnerable biological characteristics and live in areas that are relatively less affected by climate change.

The study “Using fuzzy logic to determine the vulnerability of marine species to climate change” was published today in Global Change Biology.

This research was funded by the Nippon Foundation – UBC Nereus Program and the Natural Sciences and Engineering Research Council (NSERC) of Canada.

The researchers used “fuzzy logic” to develop this database. Fuzzy logic allows reasoning and drawing conclusions based on the best available expert and scientific knowledge, even with incomplete or uncertain information. Such fuzzy logic approaches have been applied to study marine biodiversity conservation and fisheries management.

About the Nippon Foundation-UBC Nereus Program

The Nereus Program, a collaboration between the Nippon Foundation and the Institute for the Oceans and Fisheries at the University of British Columbia, has engaged in innovative, interdisciplinary ocean research since its inception in 2011. The program is currently a global partnership of twenty leading marine science institutes with the aim of undertaking research that advances our comprehensive understandings of the global ocean systems across the natural and social sciences, from oceanography and marine ecology to fisheries economics and impacts on coastal communities. Visit nereusprogram.org for more information.