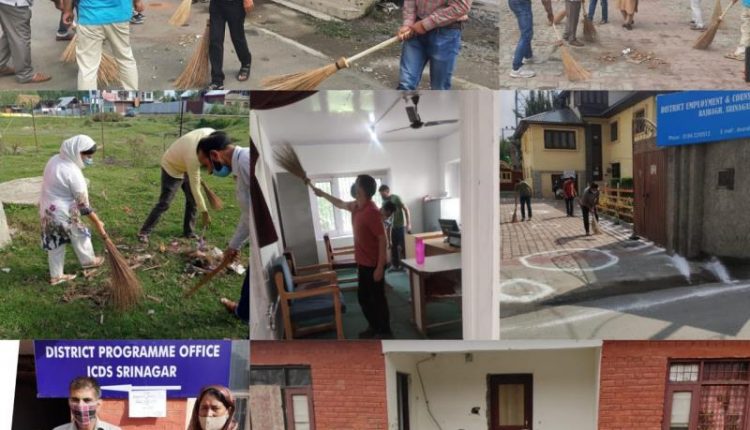 SRINAGAR :  In connection with ongoing Swachhta Pakhwada under Swachh Bharat Abhiyan being observed on the occasion of Gandhi Jayanti, the District Administration Srinagar launched a special cleanliness drives in all Government offices and at the Panchayat level.

The drive has been launched on the directions of Deputy Commissioner Srinagar, Mohammad Aijaz Asad which shall continue till October15.

During the 15-day long clean run, various Government Buildings, Office, Play grounds, Parks, Panchayat Ghars Health & Educational Institutions and other public places are being cleaned. Besides, garbage and debris will also be removed from the sides of various roads. While general public is also given awareness about the importance of cleanliness.

Some areas in Srinagar Panchayats have been identified and are being cleaned with the active participation of Rural Development Department and local volunteers. Besides, members of DDC, BDC , Panchs and Sarpanchs are also participating in cleanliness drives at various blocks and Panchayats.

The cleanliness drive was also held at right side of River Jhelum from Zero bridge to Jhelum view park.

On the occasion, the Government employees whole heartedly participated in the programme with full enthusiasm and endorsed the Swachhta Mission under Swachhta Abhiyan.

Appreciating the efforts made by the participants in Swacch Bharat Abhiyan to make Srinagar a clean district under ongoing Swachhta Pakhwada, the Deputy Commissioner Srinagar has urged the Officers/ Officials of all Government departments to ensure cleanliness in their respective office buildings, premises and surrounding so that surrounding environment is made neat and clean.