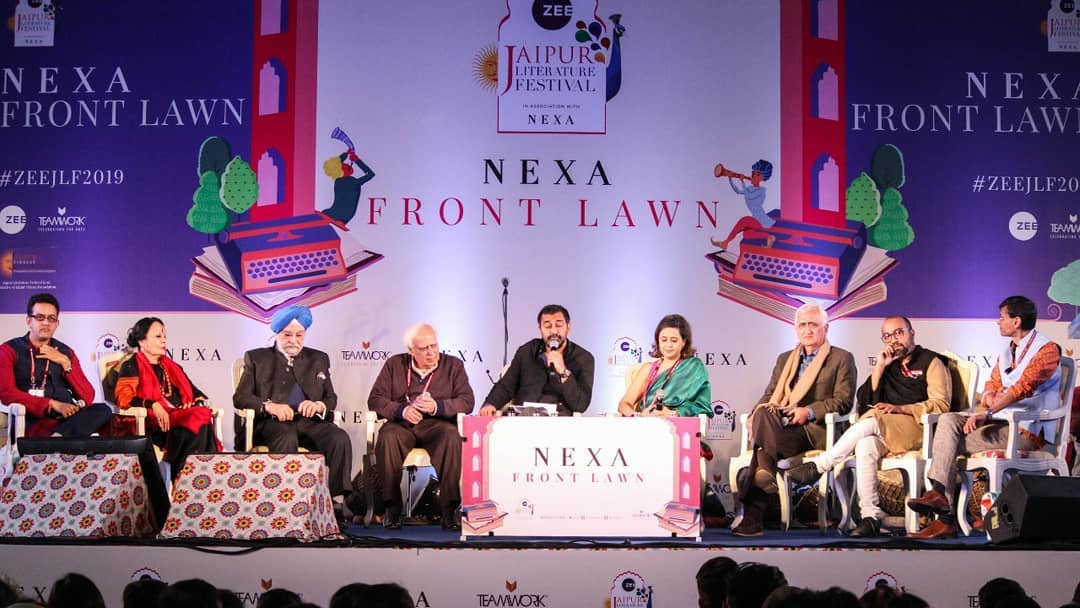 With massive footfalls, stellar conversations, the ZEE Jaipur Literature Festival 2019 ends on a high note of substance and bonhomie #ZEEJLF

Jaipur: The twelfth edition of the ZEE Jaipur Literature Festival, the world’s largest literary festival, accessible and open to all, ended on a high today as the Festival announced a total footfall of around 400,000 over the last five days and hosted over 500 speakers from around 30 countries including Iceland, Norway, Germany, Finland, Ireland, Uganda, Australia, America, England, South Africa, Denmark and China. Over 250 Sessions featured conversations, debates and dialogue spanning themes ranging from the classics, war, espionage, intelligence, politics, environment and climate change, gender issues, entrepreneurship, science and technology, along with broader areas such as fiction, adapting screenplays, mythology, crime, history, cinema, art, activism and the psychological aftermath of migration.

Conversations on the final day showcased a multiplicity of voices, from iconoclast novelists to experts and policy veterans, reflecting the truly global and relevant reach of the ZEE Jaipur Literature Festival. With a large chunk of the audiences representing the young, the Festival’s outreach to shape minds and inspire imaginations has tremendous transformative potential. As always, the Festival empowered participants through the stories it told and the importance it continued to emphasise upon the idea of dialogue to seek solutions – something which the divisiveness of the modern world chooses often to dismiss.

The day began with After Trainspotting which had the quirky Scottish author of the cult book Trainspotting, Irvine Welsh, in conversation with Chandrahas Choudhury. Welsh’s work is characterised by a raw Scottish dialect, an edgy, brittle humour and a brutal depiction of Edinburgh life in all its junky seediness. Talking about how his perception of his own work has changed since the Trainspotting movie came out, Welsh said, “You tend to see the actors’ faces rather than the characters and you have to do the terrible thing of reading your own books to get the description of the characters.”

At the NEXA Front Lawn, Breaking Free: A New Kind of Beautiful had Manisha Koirala, Germaine Greer, Madhavi Menon and Sonal Mansingh in conversation with Sharad Paul in a discussion about breaking prejudices in perceptions of female beauty. Koirala stated that it was one’s “art and personality” that make someone beautiful. Madhavi Menon tried to find the reason for the rising number of people who are unhappy with their body; “Capital-ruled media thrives on the concept of Divide and Rule (men and women).”

Beginnings and Endings had Anjum Hasan, Andrew Sean Greer, recent DSC Prize for South Asian Literature-awardee Jayant Kaikini and Mahesh Rao, in a session moderated by Paul McVeigh, where the momentum of the beginning and the sense of an ending which define the circumference of the short story, was in focus. “I really do like quiet beginnings,” said Mahesh Rao, while Anjum Hassan stated that she doesn’t “begin with an idea of the story as a plot, it’s more an impulse”.

Are we sleepwalking into our future? By 2062, we will have built machines as intelligent as us. In The Future is Now, Professor of Artificial Intelligence Toby Walsh and Data Journalism Professor Meredith Broussard, in conversation with Anupama Raju, focussed on how A.I. will evolve and the choices we need to make to ensure that we remain in control of our own narratives. Raju started things off on an ominous note, announcing, “In 50 years, we’ll probably have a robot conducting this session.” While all the panelists called for better understanding of AI and machine-learning, Toby Walsh had a positive outlook; “Computers will help us build a more rational, fairer, and more transparent world.”

The Wonder of Pāṇini’s Sanskrit Grammar was a fascinating discussion in which British Indologist and SOAS Sanskrit Lecturer, also an ordained mahant from the last Maha Kumbh, James Mallinson, introduced Vikram Chandra who shared his passion about the Sanskrit language and its most abiding grammarian, Pāṇini.

In What We Talk About When We Talk About Rape, intrepid journalist Sohaila Abdulali in conversation with Namita Bhandare, spoke of the issues and the silences around the subject of rape as part of the Women Uninterrupted Series. Sohaila, who was gang-raped as a teenager in Bombay, shared her story, as well as those of many others throughout the world, and gave her take on the global conversation about rape in her book of the same name written from the point of view of a writer, counsellor and activist. Sohaila said, “I see people worrying that women will lie and say that they have been raped, but I lied and said that I hadn’t been raped to avoid being locked up,” while talking about the police’s reaction when she tried to report the incident. Namita Bhandare said, “The only time when a raped woman is believed without hesitation is when she is dead.”

Ben Okri was back to what he does best, apart from when he is writing – speaking about his latest work, The Freedom Artist, and about his life, inspirations and experiences. In conversation with Chandrahas Choudhury, the Man Booker Prize-winning author also mused over the theme of relevance of language in the field of literature. “We’re inflamed by the public language of politicians – the demonizing language of politicians,” he observed and praised the liberating role of language in the field of literature. He made special mention of poetry in this regard, saying “poetry keeps language functional at the highest level”.

The Devil’s Advocate: The Untold Story had Karan Thapar in conversation with Sagarika Ghose where he discussed his book The Devil’s Advocate. The session was a delightful one with Thapar and Ghose engaging in a free-wheeling, candid and effervescent conversation where uncomfortable anecdotes from Thapar’s vast career of interviews were touched upon with the effortless ease found amongst old friends. The session began with Thapar confessing that he had a crush on Benazir Bhutto. He also touched upon his much-discussed interviews of Amitabh Bachchan in which he had asked the latter about his affairs; his rather gnarly interview of Jayalalitha who had openly told him she hadn’t enjoyed talking with him; his relationships with and reminiscences of LK Advani, Indira Gandhi and Sanjay Gandhi – all of which form the core of his book and memoir The Devil’s Advocate. At one point, the session also had Thapar declare, “There is nothing pejorative about being part of Lutyen’s media!”

Swachh to Swasth Bharat had Amitabh Kant, Marcus Moench, Mridula Ramesh, Naina Lal Kidwai and Parameswaran Iyer in conversation with Sanchaita Gajapati. Even as India continues to battle relentlessly for basic hygiene, the Banega Swachh India Campaign, now in its fifth year, has been able to spread awareness about cleanliness and sanitation practices which have empowered citizens with better health. In this session, experts and policy-makers discussed objectives, strategies and critical priorities in the struggle to establish a clean and healthy living environment.
Operation X discussed journalist Sandeep Unnithan’s forthcoming book. Operation X is the untold story behind one of the world’s largest covert naval wars, and is written by one of its principal architects. Naval Commando Operations (X) was the code name given by the Directorate of the Naval Intelligence for a series of complicated guerrilla operations directed against the maritime jugular of the Pakistan Army in erstwhile East Pakistan. These innovative sabotage missions, executed with specially-trained East Bengali college students, were part of India’s assistance to the Mukti Bahini guerillas in the months preceding the 1971 Indo-Pakistan war. NCO(X) used the largest number of maritime saboteurs in the history of modern naval warfare to achieve its objectives. The authors, Captain Mohan Narayan Rao Samant, Maha Vir Chakra awardee and former staff officer of this covert naval unit, Sandeep Unnithan, Executive Editor of India Today, and former diplomat G. Parthasarathy, were in a discussion anchored by NDTV Defence Editor Vishnu Som who has vast experience in conflict coverage.

Shades of Life had Kapil Sibal in conversation with Pragya Tiwari on his book of the same name. Sibal spoke to Pragya Tiwari about his personal life, his long career in politics, his poetry and convictions, his views on popular issues and the big challenges to India’s future. “Everybody says that in India we need a strong leader, a macho guy. The problem with such a strong leader is that he imposes his own ideas on the people of India. You can’t even do that in a family. In a country of several billion people, you can’t impose ideas,” said Sibal when talking about strong individuals in politics.

Alexandria: City of Memory was a fascinating session. Alexandria during the first half of the 20th century was one of the liveliest and most prosperous ports on the Mediterranean: cosmopolitan and brilliant. Particularly vibrant were the Greek, Italian and Jewish communities that gave Alexandria its particular flavour. It was above all a literary city, one that gave birth to the poetry and novels of Constantine Cavafy, E.M. Forster and Lawrence Durrell. In this session, writers Claudia Roden and André Aciman discussed memories of a lost world with another Alexandrian exile, Karima Khalil.

Are liberals as intolerant as illiberals? Or is liberal thought the primary source of progressive change the world over? Can liberals and illiberals, with their competing moral universes, ever learn to coexist? An illustrious panel engaged in a fiery debate over a timeless question at the NEXA Front Lawn during the closing debate at this year’s edition.

Over 4000 people contributed to bringing the Festival together including a dedicated group of nearly 300 volunteers.

The Festival Bazaar with a vast array of artisanal products did brisk business and was a favourite haunt of attendees as was the JCB Prize for Literature Festival Bookstore, which stocked books by all participating authors and literary prize-winners, was managed by Full Circle, and had a steady stream of bibliophiles going in to browse, buy and savour the feel and scent of new books.