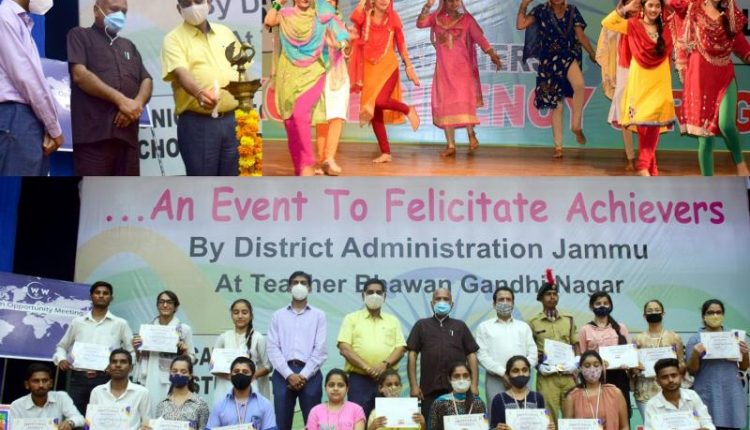 The function started with the National Anthem followed by cultural dance items by the students of GHSS Shastri Nagar and Canal Road.

Artists of Information Department also mesmerised the audience by their astonishing performances.

It was also informed during the function that several activities were conducted under Azadi ka Amrit Mahotsav in Jammu District.

Under plantation drive, 3615 saplings were planted at 271 places and Sanitation drive was also held at 490 places.

Under sports activities, 85 games were organised at different places in which 1508 players participated. Similarly, 590 camps were organised in which 78527 domicile certificates were distributed, 57813 cards under JKPMJAY, SEHAT Health scheme were issued and 5230 Attestation of Mutations of Inheritance were completed.

Speaking on the occasion, the Mayor said that India is celebrating its 75th Independence Day and it is the time to educate the youth about the value of freedom as they are the real strength and future of the country. He said that thousands of freedom fighters sacrificed their lives to attain Independence and now ‘it is our responsibility to create the nation of their dream.’

While addressing the gathering, DDC Chairman called upon all to set personal goals toward nation building. ‘Striving to excel in one’s line of profession also leads to the nation’s development and prosperity’ he added.