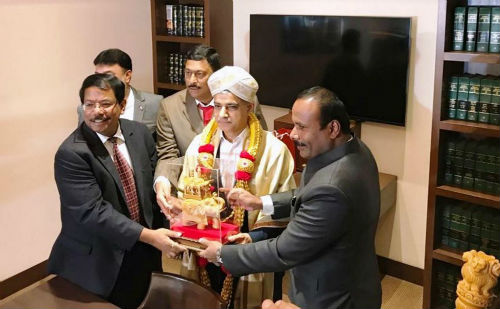 Bangalore: The Mayor of Bengaluru, Sampath Raj, and Mayor of London Sadiq Khan, today announced that London and Bengaluru will lead a global partnership of up to 20 other world cities on tackling air pollution in urban centres. The C40 Air Quality Network, will allow city leaders, from India and around the world, to share ideas, nurture innovation and drive ambition in the global effort to improve the quality of the air in cities.

C40’s new Air Quality Network will be co-chaired by the Mayor of London and the Mayor of Bengaluru, working with up to 20 other global cities to develop solutions to the international air pollution crisis. Bangalore will host a workshop for global cities to share best practice in tackling air quality in 2018

Six Indian cities, Bengaluru, Chennai, Delhi, Jaipur, Kolkata & Mumbai, are members of C40 Cities Climate Leadership Group, an alliance of more than 90 of the world’s greatest cities committed to urgent action on climate change and air pollution. As C40 members these Indian cities will have direct access to the learnings from the Air Quality Network, in addition to specific air quality content in other C40 networks, including those on transport, buildings and energy, and waste.

Air pollution is responsible for 6.5 million premature deaths globally every year according to the WHO. There were nearly 1.1 million early deaths in India in 2015 due to air pollution. This is a global crisis, with 80% of urban dwellers breathing air that does not meet WHO health standards.

Mayor of Bengaluru, Sampath Raj, said:
“The City of Bengaluru is symbolic of the pace of urbanization we are seeing in India and in the global south. The city’s population has grown from 3.5 million in 1985 to nearly 11 million today. While this rapid growth has made the City of Bengaluru the driver of economic growth in the region, creating millions of jobs and market opportunities, the city has also experienced deteriorating air quality as a result of increased traffic congestion, and construction works. As the Mayor of the City of Bengaluru I am keeping a close eye on quality of life in the city and air quality is one such indicator that directly impacts the health and well-being of our citizens.

C40 Cities Climate Leadership Group has been working with and helping Bruhath Bengaluru Mahanagara Palike (BBMP) over several years now in exposing us to sustainable urban development best practices. We are extremely excited to be co-leading C40’s new Air Quality Network along with London. Together with London’s Mayor Sadiq Khan, I look forward to bringing together mayors from cities around the world and sharing our lessons learned, to tackle the urgent need to address air quality in our cities.”

The Mayor of London, Sadiq Khan said: “Air pollution is a global problem that harms the lives of millions of people. Only by working together will we help beat this international health crisis and protect people from breathing in air so filthy it damages their lungs and causes diseases. I’m proud today to announce London and Bengaluru will be leading a new air quality partnership. We hope to work with key cities across the world and in India, including with our good friends here in Delhi.”

“I’m doing everything in my power to clean up London’s lethal air from introducing the world’s first toxicity charge for more polluting cars and bringing forward the Ultra-Low Emission Zone, to cleaning up our bus and taxi fleet. I’m pleased my ambitious work will soon be boosted by new state-of-the-art air quality sensor monitoring technology that will help deliver the most comprehensive data on toxic pollution ever.”

“The toxic emissions that cause air pollution are also contributing to climate change that threatens to cause devastation to the world’s cities”, said Mark Watts, Executive Director, C40. “Mayors recognise how urgently they need to act to clean the air we breathe in our cities, and I’m delighted that Bangalore and London are bringing cities together to accelerate action. The C40 Air Quality Network will help transform the way that air pollution is tackled in cities across India and around the globe.”

Bangalore, together with other relevant State Government bodies and agencies have put in place several actions that will improve air quality, including:

45 km of new wider sidewalks on 50 major city centre roads are improving walkability, reducing fatal accidents and supporting more people out of vehicles and walking. The TenderSURE Project is the first of its kind in India where new infrastructure such as storm water, water, sewer and telephone cables are being re-laid along with pedestrian infrastructure
Phase 1 of a new metro system is now complete and operational, making it easier for citizens to travel around the city without their private transport.
Bangalore is also working on last mile connectivity to all the metro stations by implementing Station Access Plans and thereby improving ease of access to metro stations
The state-government-run public transport operator is transitioning its current fleet of 6,300 diesel buses to an all-electric fleet of close to 12,000 buses in the next 10 years. The Bengaluru Metropolitan Transport Corporation will shortly launch a tender for 150 electric buses.
Penalty orders have been issued to businesses and citizens caught open garbage burning – a major contributor to air pollution. The city has already achieved 50% citywide segregation at source and has identified 16 streams of waste.