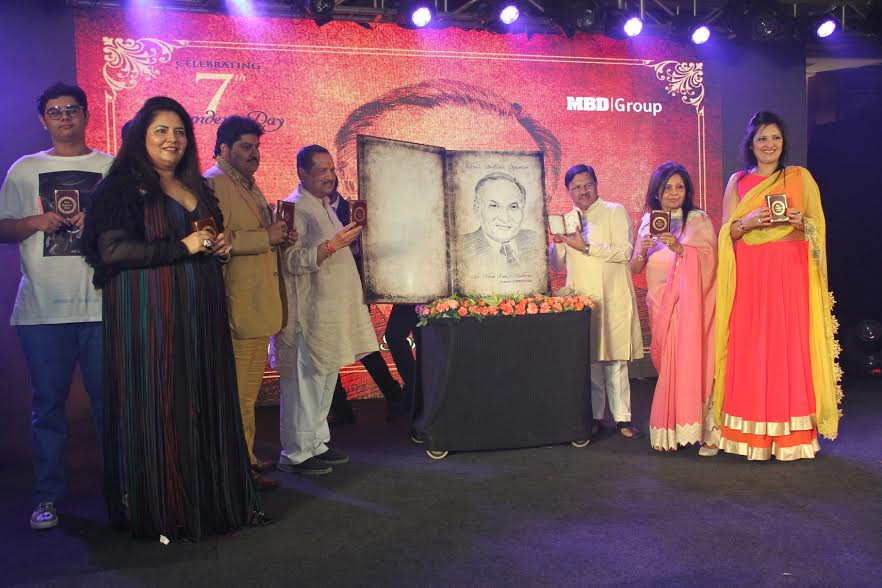 New Delhi: MBD Group, the leading education company in India with large diversified operations in hospitality and retail developments observed its 7th Founder’s Day on 10thJuly 2017 in New Delhi amid much fanfare. The event also marked the 72nd birth anniversary of the founder of The MBD Group, Shri Ashok Kumar Malhotra.

Founder’s Day is the most awaited event for the every member of MBD family. As part of celebrations to commemorate his legacy, a book encapsulating the persona and beliefs of the founder, aptly titled “Our Founder Says” was launched on the occasion. The book reflects the vision and guiding principles that led to the creation and grand success of the MBD group, not only in the field of education but also in hospitality, retail developments and much more.

Just like it was the vision of the founder, Bahut Jyada sapne dekho, Un sapno se jyada mehnat karo is what he used to believe, encouraged everyone to do their best, set new benchmarks, and strive to achieve them.

Since recognitions are more like a motivating force for the MBDians to shine, there were felicitations of best performers that encourage them to scale greater heights with their determination and hard work. To make a contribution to the children education of their employees, select scholarships were offered by MBD Group. Moreover, the celebration provided a great platform to the team members to showcase the spirit of MBD Group. MBDians from the different verticals exhibited various inspiring acts as well as dance performances.

MBD Group has thrived over six decades of its existence and has always stayed true to its core value of providing education to all with its mission “for every literate person there should be an MBD Book”. The group has ventured into the Middle East, South African and Sri Lankan markets with its huge basket of education services. MBD group is not only the pioneer of AR in Education in India but also the first publisher to launch VR in this field. In the hospitality sector, the group owns and operates Radisson Blu MBD Hotel in Noida and Ludhiana and may more are under development. The group has also recently signed a Joint Venture with Steigenberger, Europe’s leading Hotel Company last year. Under this JV, the group will focus on key cities including Delhi, Mumbai, Chennai, and Hyderabad as they plan to come up with 20 luxury hotels over the next 15 years. The group has also ventured into premium and luxury mixed use developments.

On this occasion, Mrs. Satish Bala Malhotra, Chairperson, MBD Group said, “The success of MBD Group can be attributed to the undying spirit of hard-work and innovation of our Founder. He believed in ‘Education for all’ and that is what propelled him to work for the upliftment, well-being and betterment of the masses. He believed that every human being is endowed with the potential to excel and encouraged every member of his team to be brilliant. This year’s event is historic in its own way because we are giving readers an un-hindered access to the cornerstones of our success in the form of the book “Our Founder Says.”

Ms. Monica Malhotra, MD, MBD Group, said, “The palpable enthusiasm in celebrating our 7th Founders Day demonstrates the undying legacy and strong perseverance of my father, Shri Ashok Kumar Malhotra. We will continue to be guided by his vision and strive to scale new heights in the coming years with the strong lineage and inherent strengths of the group and blessings of our Founder Father.”

Ms. Sonica Malhotra, Joint MD, MBD Group, said, “Shri Ashok Kumar Malhotra was a keen innovator and believed in the philosophy of symmetrical growth where the company grows only when its people grow. Carrying his legacy forward, we will remain focused on ensuring people-centric growth so that we keep our Founder Father’s legacy alive and enable the group to maintain its leadership position.”

The group’s work is not limited to its immediate family. Under the My Best Deeds, the CSR initiative by Shri Ashok Kumar Malhotra Charitable Trust, the group carries out activities pan India revolving around his philosophy of giving back to the society and help the needy in all possible way.

Entrepreneurs, CEOs, MDs, VPs across the country connect with their alma mater to reminiscence about their life at GIM at ‘Imprints 2017’