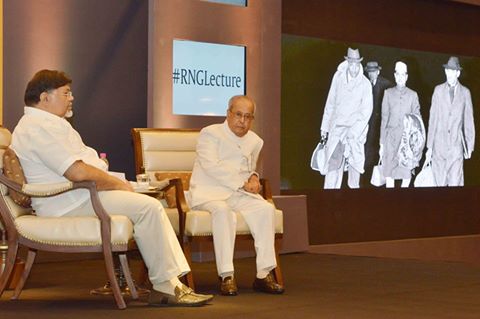 Speaking on the occasion, the President said that Shri Ramnath Goenka embodied the finest virtues of journalism: fierce independence, fearlessness and a determination to always stand up to the powerful and fight against the abuse or misuse of power. In fact, there was nothing he enjoyed more than a fight to protect the right of The Indian Express to publish what he thought was proper and just.

The President said that technology has led to a phenomenal growth in the means of communication, bombarding the public with unprecedented volumes of data, information and, not least, opinion. This has had many positive outcomes: foremost, it has broken the shackles of silence imposed on the powerless. The sense of liberation that the Internet and social media especially, allows, has ensured that everyone has a voice and that even small voices in the remotest areas can be heard. The average citizen has been truly empowered in her ability to speak out and to find out. All of this growth has resulted in a plurality and diversity in the access to information. There is a whole new information world out there to be tapped by our people across the length and breadth of the country. However, the downside is that the sheer scale and volume of data and information means that much of what is available today remains unfiltered and unmediated. In many cases, even unchecked.

The President said that he believes the media must safeguard the public interest, and provide a voice to the marginalized in our society. Our people face enormous inequalities which need to be articulated and highlighted continuously – by the media — in order to ensure they are addressed by those who govern. For it to be able to aim for the highest standards of professionalism, journalists and media organizations must turn the spotlight inwards, on themselves. They must hold themselves to the standards they demand of others.

The President said that the Press and the media are considered to be the fourth pillar of the democracy. It wields extra ordinary powers of not only holding the other three pillars accountable, but also influencing and shaping public opinion like no other institution of democracy can. While this enormous power, to sustain itself requires the basic dictum of freedom of expression, at the same time it puts an equally enormous responsibility of accountability and credibility on the media itself. To my mind, while the press will be failing in its duty if it does not pose questions to the powers that be, it will have to simultaneously judge the frivolous from the factual and publicity from reportage.

The President said that media must learn the art of withstanding pulls and pressures without sacrificing its commitment to free and fair reportage and always remain on guard against conformity. Because any tendency towards conformity to be enforced, often requires disguising or dissembling the truth and the facts. This is completely alien to the ideals which inform professional journalism which lives and even dies by chasing the facts and the truth.

The President said that as we go forward as a nation we face contradictory forces: on the one hand is a country with immense potential for growth and prosperity; on the other is a growing sense of unequal distribution of resources and opportunities. The media should reflect both in equal measure but it can only do so if it truthfully reflects the reality on the ground. If the media believes in the freedom of expression, a free and a fearless independent media as Ramnath Goenka did, it must choose to reflect a plurality of opinions for that is what breathes life into our democracy and has defined us as Indians. It must always remember that its fundamental task is to stand up and ask questions with honesty and fairness. That’s the sacred compact it has with citizens in a democracy.