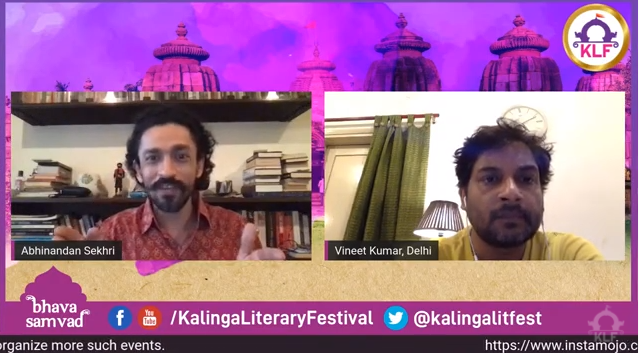 New Delhi: The broadcast media with the onset of the new century saw a steep rise in increasing platforms but the quality of the news has gone down in recent years. There is silver lining nevertheless, argues Mr. Abhinandan Sekhri, the well-known media critic and founder of Newslaundry. According to him the broadcast media functions on the basis of the prime time advertisements which are largely based on the anchor’s popularity. But with the internet disrupting the broadcasting ecosystem, slowly the prime time anchors will no more be important drivers of advertisement revenue. Facebook, Google, and YouTube are disrupting the landscape.

Abhinandan was in conversation with poet and author Mr. Vineet Kumar at the 44th Kalinga Literary Festival’s new initiative, Bhava Samvad. The discussion touched upon the journey of the media in India, challenges in media regulation, constraints in doing research-based reports, and fake news and paid news to engulf the media ecosystem.

Citing the case of the hyperactive media coverage of Prince who fell into an open bore well in 2005, both Abhinadan and Vineet highlighted how the broadcast media changed since then, mostly towards degeneration. They stressed that many mediapreneurs were not interested in the sanctity of journalism as such rather on protecting their bigger business empires. The media platform was used as a safety valve and lobby group.

Both agreed that the print newspaper continues to be the hope even though in the times of COVID they have reduced their size and a lack of focus on local reporting is visible. Abhinandan stressed that the broadcast media will see decreased attention and will have a lesser impact on overall society. He argued that the internet has created certain problems and the same internet has the solution to offer.

Miles Education invests over 6 million USD to set up learning hubs in 9 cities across India; to clock 250 cr. revenues by end...