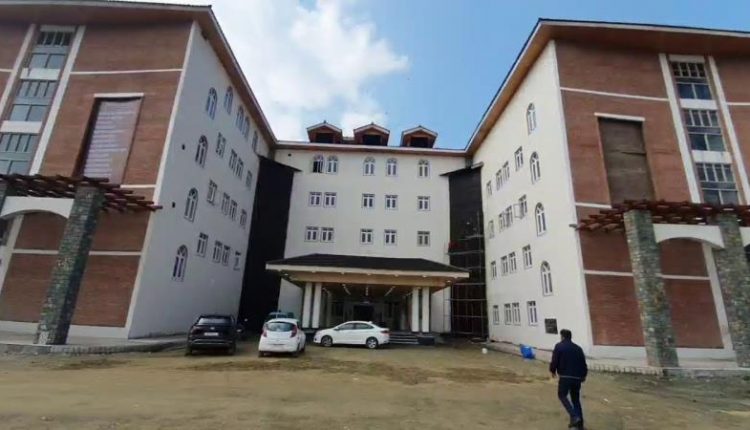 SRINAGAR : As the whole world as well as Jammu and Kashmir is facing an unprecedented challenge due to COVID-19 pandemic, the Jammu and Kashmir Administration has amplified the medical infrastructure across the Union Territory to safeguard the lives of people and also to provide them best possible medical care facilities.

In order to strengthen the medical infrastructure across Jammu and Kashmir, more than 400 Health Infrastructure Projects/works worth Rs. 7177 Crores are being initiated here. Two new AIIMS with the project Cost of Rs 4000 Cr (Rs. 2000 Cr each) one each at Jammu Division & Kashmir Division, seven new Government Medical Colleges being established with total Outlay of Rs. 1595 Cr. Ten new Nursing Colleges being set up with an approximate cost of Rs. 60 Crore. Two State Cancer Institutes coming up worth Rs. 240 Cr, one each at Jammu and Kashmir Division.

Jammu and Kashmir has also received Rs 881 crore for 140 health projects under PMDP out of which 75 projects have been completed and 26 projects will soon be completed. World Bank is providing financial assistance of Rs 367 crore to Jammu and Kashmir, thereby further strengthening the health care institutions here.

In a series of steps towards addressing the issue of shortage of doctors in Jammu and Kashmir, various initiatives like establishment of five new medical colleges in addition to two new more Medical Colleges at Udhampur and Handwara, 500 additional MBBS seats in Government Medical College, out of which 85 seats are reserved for financially weaker sections, have been taken. The new medical colleges have been upgraded by attaching them to the District Hospitals with all required facilities while as the existing 300 bedded hospitals will be developed into 500 bedded hospitals

To overcome the shortage of post-graduate doctors and to prepare specialists at that level, the Health Department has also started Diploma of National Board Courses in the Government medical colleges and District Hospitals of the districts, which will increase at least 250 seats. To promote AYUSH care services, two AYUSH colleges – Unani and an Ayurvedic college have been established. Facilities of AYUSH are also being provided to 571 Stand Alone Dispensaries. 11 Auxiliary Nurse & Midwife (ANM)/ General Nursing & Midwifery (GNM) Schools have been made functional with the central assistance and 10 more schools are in the process of being operational. Introduction of B.Sc. Paramedical Courses.

All these developmental initiatives have resulted in incremental improvements and positive changes in the Health Index of J&K. In the last three years, the neonatal mortality rate in Jammu and Kashmir has come down from 23.1 to 13.3 per 1000. The infant mortality rate has come down from 32.4 to 16.3 per 1000. Sex Ratio at birth has increased from 923 to 976 per 1000. Institutional deliveries have increased from 7% to 92.4%.

In an another remarkable initiative for upgradation of health care infrastructure, the J&K Administration is going to set up two Medi-Cities; one each at Jammu and Kashmir divisions. The Medicity in Kashmir Division will be established in Sempora, Pampore as the the place will act as a focal point for the whole population of the Valley for specialised health services. Similarly, Medicity in Jammu division will be established at Miransahib, Jammu as the land is ideally located close to the main city and can cater to the medical service requirements of the entire division.

Apart from this, one major initiative of J&K government was preparation of health investment policy document for boosting private investment in the health sector to minimize the burden on the overburdened public health sector in J&K. J&K has received investment proposals of over Rs 3,000 crore in the health-care and medical education sectors. The policy offers various incentives to private investors and entrepreneurs to set up health-care facilities that aim at improving peoples access to quality health services, the spokesperson said. It also aims to promote medical tourism in Jammu and Kashmir.

Moreover, the Administrative Council (AC) of J&K Government has also accorded the approval to construction of an additional block of Indira Gandhi Government Dental College, Jammu at an estimated cost of Rs. 44.46 crore. The construction of the new block will cater to the increased patient load by creating infrastructure for several clinical departments including hospital administration, emergency section, operation theatre, wards, prosthodontics & dental material department, pedodontics department, oral pathology, dental histology department, and community dentistry department. The decision is aimed at providing quality dental services to the public and introducing post-graduate courses in dental care. It will also support the up-gradation of vital dental care services on modern grounds.

The government of Jammu and Kashmir will offer support (by) providing land, financial aid and assistance subject to the State Health Care Investment Policy, 2019.The project proposals will be cleared speedily through a Web-based single window, absolving the investors of the need for any physical touch point with the approving/licensing authorities.

Apart from these quality initiatives for upgradation of health infrastructure across Jammu and Kashmir, several health institutions have achieved national recognition under various schemes.

Similarly, under the Kayakalp scheme which was started to promote cleanliness, hygiene and infection control practices in public healthcare facilities, District hospital Reasi of Jammu & Kashmir has been awarded the first prize of Rs. 50 lakh for maintaining cleanliness and hygiene in and around the hospital premises.

Recently, the Jammu and Kashmir government declared awards under “Kayakalp 2020-21”, an initiative for awarding public health facilities for excellence in cleanliness and hygiene in which District Hospital Udhampur clinched first place in the category of District Hospitals winning an award money of Rs 50 lakh while commendation award of Rs 3 lakh was given to District Hospital Reasi.

In brief, the developments in public health infrastructure is proving to be the necessary foundation for all public health services in Jammu and Kashmir. The sincere and concerted efforts of government of Jammu and Kashmir with the help of central government has resulted in developing a strong public health infrastructure here besides the process of establishing the world class health care facilities is going on with full pace which will change the face of health care system across Union Territory in coming years.

Honeywell appointed Rajesh Rege as a new President for India