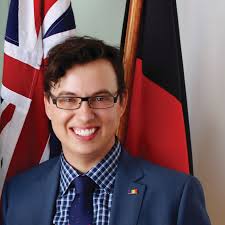 Dean won the Law Council of Australia’s 2020 Australian Young Lawyer of the Year Award. The national award recognises his outstanding contribution to the profession through pro bono work and advocacy.

Dean is the founder of Pride in Law, Australia’s first national LGBTIQ+ Law Association. Pride in Law is a not-for-profit networking association that promotes diversity in the legal profession for lesbian, gay, bi-sexual, transgender, queer and questioning lawyers.

Dean has also spearheaded a range of initiatives to promote gender diversity and awareness in the profession and judiciary.

“The award was quite a surprise, but I’m very humbled and honoured to be recognised by my peers in the profession,” he said.

“It is a career milestone, but my attitude has always been that it’s not about awards, it’s about the quality of the work.

“I think the award recognises what I’ve been able to achieve in the profession so far, and also my volunteer and pro bono work for the LGBTIQ+ community.”


Dean Clifford-Jones accepting the AEL Young Alumnus of the Year award in 2018.
A Bachelor of Laws (Honours) and Bachelor of Arts graduate, Dean was the first person in his family to attend university.

The promising student received a George Alexander Foundation Scholarship that enabled him to move from the Sunshine Coast to pursue his studies at Griffith.

“I wouldn’t have been able to afford to attend university if it wasn’t for the scholarship,” he said.

“I was the first in my family to attend uni and it was a big deal.

“My Mum worked hard her whole life to help give me more opportunities than she had growing up.”

Dean’s keen interest in social justice issues was one of the reasons he chose to study at Griffith.

“Griffith felt like the right place for me,” he said.

“The program at Griffith is unique and it was very progressive.

“I didn’t apply anywhere else, and I truly believe that my time at Griffith created the person I am today.”


Professor Elena Marchetti
Dean became a judge’s associate in his first year after graduating and has achieved remarkable success in the legal profession as a Crown Prosecutor and later as a senior child protection lawyer. He is currently a full-time member of the Queensland Parole Board.

“It is certainly a intense job that comes with a lot of responsibility, but I consider the work I do a privilege,” he said.

“Despite the heavy material that comes across my desk, I still have faith in humanity.

“You have to believe that people can change, and try and see the good in society.”

Acting Head of Griffith Law School Professor Elena Marchetti said Dean was a past Arts, Education and Law Young Alumnus of the Year and one of many remarkable graduates making their mark in the legal profession.

“Dean is an accomplished young lawyer who has a clear passion for diversity in the legal profession,” she said.

“Since graduating from Griffith, Dean has made a significant contribution to the profession and the broader community.”

Shoolini University: A Young Indian University’s Path to the Top of the International Research Scene