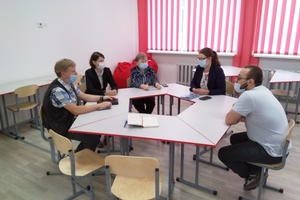 At the meeting E.Yu. Guseva spoke about the results of the activities carried out in the region and about the plans for the next academic year. She presented letters of thanks from the rector of PetrSU A.V. Voronina O.V. Toderash. and N.A. Lisina for active and fruitful cooperation with PetrSU.

The next stage of their stay in the Pudozh district was a meeting with the teaching staff of the secondary school №3 in the city of Pudozh. The school was attended by the school director N.A. Lisina, deputy director for design, educational, methodological activities S.A. Konovalova, Deputy Director for Academic Affairs G.V. Dimitrova and teachers of the school.

DI. Balashov spoke about the results of the activities carried out by the Physicotechnical Institute of PetrSU in the districts of Karelia and suggested closer cooperation with the schools of the Pudozh municipal district.

He noted the peculiarities of studying at the Physicotechnical Institute of PetrSU and the advantages of PetrSU in comparison with other universities in the North-West. S.A. Konovalova put forward a proposal for a more thorough preparation of schoolchildren for various stages of the All-Russian Olympiad with the involvement of teachers from PetrSU. Particular emphasis in the meeting was made on the consideration of the issue of teaching the discipline (project activities). S.A. Konovalova shared the features of the successful implementation of this discipline at school, and A.V. Soloviev noted the importance of studying project activities at PetrSU and suggested joint participation of schoolchildren with interesting projects in Student Scientific Conferences of PetrSU.

With the aim of closer and more productive cooperation, E.Yu. Guseva suggested that the school conclude a cooperation agreement with PetrSU.

The third stage of visiting the area was a visit to the Museum of Local Lore. A.F. Korableva.

PetrSU representatives were met by the museum director E.V. Strings. Issues related to assistance to PetrSU in carrying out cultural and research events in the Pudozh region were discussed at the meeting.

It is necessary to note the huge tourist potential of the Pudozh region, since it is here that unique artifacts of the past are concentrated, namely, the petroglyphs of Lake Onega, which are more than 6 thousand years old.