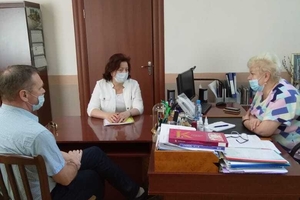 An official meeting of the leaders of the expeditionary detachment of PetrSU, I.M. Suvorova and I.P. Konev with the head of the local administration V.I. Bulavtseva.
During the meeting, the scientists spoke about the goals and objectives of a comprehensive scientific expedition in the region. During the discussion, the issues of research of monuments of wooden architecture, tourist infrastructure were touched upon, as well as the problems of the implementation of National Projects in the region. Valentina Ilyinichna answered all the questions of the scientists of PetrSU, and also ordered the provision of all kinds of assistance to the researchers.

Ivan Petrovich Konev gave a lecture for the administration staff on the topic “Human capital preservation as an urgent problem of Karelia in the light of the National Projects” and interviewed the Deputy Head of the Administration Valeria Vladimirovna Mellari.

In a friendly one and a half hour conversation, the especially active position of the local population with the support of municipal specialists in the implementation of National projects was noted. During the conversation, it was found out that 4-5 projects of local initiatives are being implemented annually in the region on the terms of co-financing of local residents of at least 5%. This is mainly due to the “People’s Budget” program and the formation of territorial public self-government.

Communication with the staff of the local administration was of a constructive nature, contributing to the success of the complex scientific expedition of PetrSU, told the leaders of the expeditionary team of PetrSU.

The Artificial Intelligence Center of PetrSU was visited by Kirill Lipa, Director General of Transmashholding

University of Virginia: Research Discovery A Pearl Of Hope For Imperiled Oyster Reefs

University of Virginia: Research Discovery A Pearl Of Hope For…