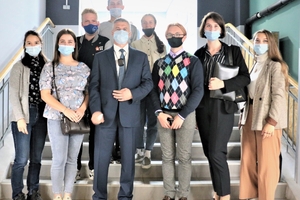 Artur Parfenchikov met with young people in the Youth Innopark of PetrSU.
Almost an hour and a half students of PetrSU, a branch of the RANEPA and the Petrozavodsk Conservatory named after A.K. Glazunov asked the head of the region questions of concern to them.

The students were interested in the issues of the introduction of unified travel tickets, the development of science, transport infrastructure, tourism in the region, the participation of student teams in the construction and development of republican infrastructure facilities, etc.

I liked that many students (it is important that not only PetrSU students were present) are not indifferent to the problems of the region and are ready to work for its development. I am very glad that the Head of Karelia Artur Olegovich Parfenchikov is determined to interact with the active youth of the republic and is ready to personally answer important questions of concern to students.

As the chairman of the Student Scientific Society of PetrSU, I could not help but ask a question about measures to support young scientists and possible projects for the development of youth science in the Republic of Karelia. Artur Olegovich said that at the moment many scientific projects are being actively invested in Karelia and the Government is committed to comprehensive support for the development of science. At the same time, he noted that the issue of introducing special prizes for young scientists and graduate students is currently being discussed. This answer cannot but rejoice, so I hope that plans for the development and support of youth science will soon be implemented,

– shared her impressions of the meeting Olga Kälviyainen, chairman of the Student Scientific Society of PetrSU, student of the Institute of Forestry, Mining and Construction Sciences.