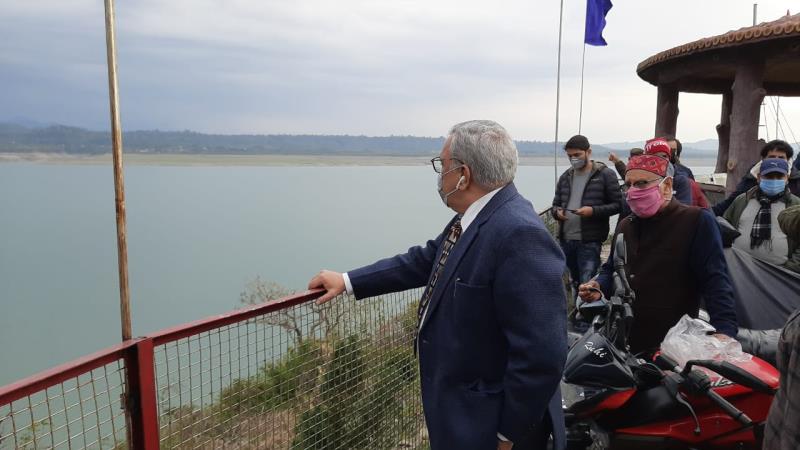 The Advisor made these remarks during his tour to Basohli where he inspected ongoing projects including Multipurpose Sports Field and Water Sports Centre Complex besides he held meeting with DDC and BDC representatives here today.

While inspecting the proposed site for the Water Sports Centre complex which is coming up at an estimated cost of Rs 3 cr near the banks of Ranjit Sagar Dam Lake, the Advisor directed the concerned authorities to develop the area with all modern amenities so that visitors do not face any inconvenience while visiting the place.

Secretary Tourism and Youth Services and Sports departments, Sarmad Hafeez who was accompanying the Advisor informed him that 21 Kanals and 10 Marlas of land will be developed with parks, walk way, sheds for boats and Floating Jetties.

While describing the location of Basohli as best suited for tourism, Advisor Khan said the picturesque landscapes of Basohli have a lot to offer for the tourists. “With the coming up of water sports and trekking at Basohli, the adventure tourism in Jammu and Kashmir will get a huge push”, added Advisor Khan.

The Advisor said Basohli has witnessed increased footfall of tourists who come to see the iconic Atal Setu bridge, cable stay bridge and scenic view of Ranjit Sagar Dam lake. He said the development of tourism infrastructure will help Basohli to become hot spot on the tourist map of Jammu and Kashmir. He said every endeavour will be made to attract the tourists of neighbouring states as Basohli shares border with the state of Himachal Pradesh and Punjab.

He asked tourism authorities to organise programmes such as Basohli festival to portray popular Basohli Pashmina work and Basohli paintings.

He also directed the revenue authorities to identify the land for Watch Towers along the banks of Ranjit Sagar Dam Lake.

Earlier the Advisor also inspected the ongoing development work of Multipurpose Sports Field at Plahi where levelling work of 153 kanals of land is going on in full swing.

He said the UT admin is committed towards upgrading sports infrastructure in urban and rural areas so that young sporting talent of Jammu and Kashmir is groomed to perform at the National and International levels.

Later, the Advisor met with elected DDC Member Basohli, Maan Singh and BDC Chairman Basohli, Sushma Devi who apprised the Advisor about the issues of the people and demanded disposal of the highlighted issues on priority.

The elected members of PRIs highlighted the issue of GI tagging of Pashmina and Basohli Painting Museum to help locals to get the value of their craft and art with the Advisor.

Advisor Khan assured that the matter related to GI tagging of local Pashmina will be taken up with the Handloom department and the art of Basohli Painting will be further showcased at bigger platforms.