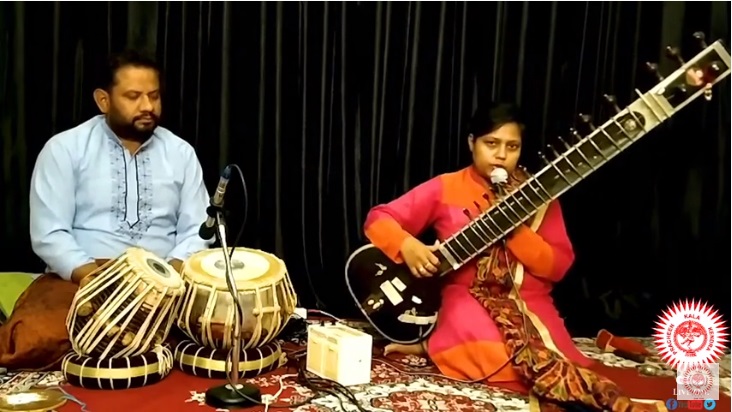 New Delhi: After completion of 17 soulful and melodic editions of the weekly webaithaks , every Friday , 8:00 pm on Pracheen Kala Kendra’s Facebook and Twitter Page and also on its official YouTube Channel, today Kendra organized its 18th Webaithak studded with Sitar recital of young and talented Patiala based Sitarist Vanita .

Vanita is an acclaimed ‘Sitar ’ player belong to Punjab Gharana. The inherent interest bloomed when Vanita was in her very infancy, at the age of five years. Under the affectionate guidance of Om Prakash Thapar, Dr. Arun Mishra and Dr. Jyoti Mittu. . She received the most coveted taalim and intricacies of Sitar from Eminent Sitar Exponent Dr. Harvinder Sharma She is empanelled artist of Jalandhar Doordarshan and All India Radio . On other hand Pt. Jaidev Born in a musically endowed family, received training in Tabla under father & Guru Pt. KALE RAM, an exponent of PUNJAB GHARANA. Acquired all the techniques of TABLA playing with sheer hard work, talent, perseverance and Riaaz and established as a Solo as well as accompanying artist of the country.

Commenced with Raga yaman in traditional starting aalap and jod which was followed by Madhya gat in Madhya Laya (9 matra) , she moved on to present two gats in drut ek taal and teen taal respectively . She concluded her recital with traditional jhala set to teen taal. Her sensitive yet controlled handling of the instrument was testimony to her talent and dedication to music. Her rhythmic and melodic vitality shone throughout her performance. She was ably accompanied by Noted tabla player Sh. Jaidev on Tabla.