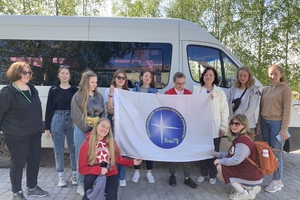 Members of the expedition of PetrSU in Kalevala

Scientists and students of PetrSU celebrated a festive day on June 8 in the regional center.
The program of the holiday for the expedition participants was extremely rich and interesting. At 10 o’clock in the morning, the entire expedition took part in the opening of an exhibition of works by the Karelian artist Vladimir Lukkonen, where a quiz based on the materials of the Kalevala epic took place.

In the district library, senior lecturer of the Department of Sociology and Social Work, Luzgina Elena Nikolaevna gave a training lecture “Man in modern social space and time: actual problems” for high school students and their teachers, and also organized a study on the topic “Defining the identity and life strategies of youth.”

Senior lecturer of the Department of Baltic-Finnish Philology Korobeinikova Svetlana Valerievna held a conversation with schoolchildren about the demand for the Karelian language on the territory of the national region.

Professor of the Department of Philosophy and Culturology Suvorova Irina Mikhailovna held a master class for students of the Kalevala secondary school on project and research activities, and then organized a study of the level of self-education of the adult population of the village.

Associate Professor of the Department of Foreign History, Political Science and International Relations Solomeshch Ilya Motelevich spoke to schoolchildren and teachers on the topic “Karelia on the historical and ethnopolitical map of Europe”, after which he conducted a study “Historical memory, regional and local identity of residents of the Karelian borderland”.

The head of the Research Laboratory of Local and Microhistory of Karelia Irina Aleksandrovna Chernyakova held a master class on digitalization of rural museums for specialists of the Kalevalatalo ethnocultural center and our students. On the same day, the debut of the 2nd year student of the IIPSN Irina Igoshina took place, who spoke to the local population with the topic of using archives in genealogical research.

In the evening of the festive day, students under the guidance of associate professor Oleg Igorevich Kulagin and senior lecturer Luzgina Elena Nikolaevna took part in the intellectual quiz game “Karelia Known and Unknown” and won prizes in a competition with local residents of Kalevala.

Register to participate in the All-Russian competition “Your Move”!