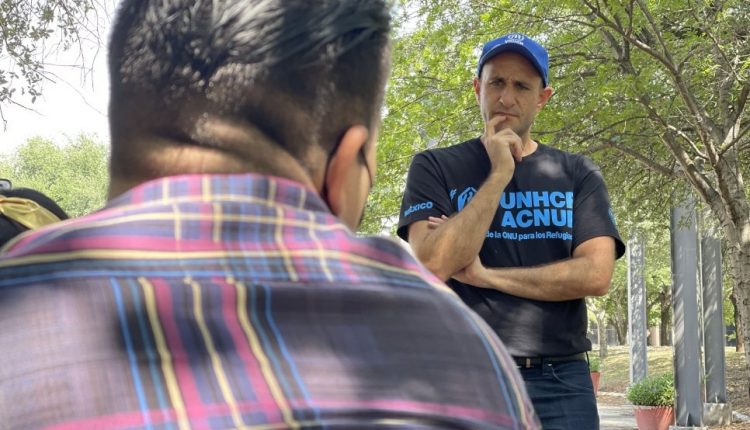 Through his reporting and authorship, Lati has long been a champion of the refugee cause. He began his collaboration with UNHCR in 2015 with the “Around the World in a Backpack” campaign. Since then, he has continued to promote refugee rights throughout his work and in the media.

In 2016 Lati boosted the visibility the Olympic Refugee Team at the Rio Summer Games, when he interviewed two members of the team, Yusra Mardini and Yiech Pur Biel, for international media. He has also profiled prominent international refugee athletes such as recently appointed UNHCR Goodwill Ambassador, footballer Alphonso Davies, and marathoner Yonas Kinde, who was part of the Olympic Refugee Team. In all of Lati’s books, refugees feature prominently.

Visiting Tapachula, near Mexico’s border with Guatemala in 2015, Lati witnessed displacement movements first-hand, as Central American refugees seeking safety from gang violence and organized crime crossed the Suchiate River. In 2021, he visited the northern Mexican cities of Saltillo and Monterrey, where he met with refugees who were relocated by UNHCR and were able to integrate in their new host communities.

“I am very honoured today to be appointed UNHCR’s Goodwill Ambassador. I know from my own experience how sport can make a positive difference in the lives of people who have been forced to flee their homes and sport will be one of the tools I use to promote refugee rights,” Lati said. “My commitment is with all refugees worldwide. Together we can shine without leaving anyone behind.”

UNHCR’s Representative in Mexico, Mark Manly, welcomed Lati’s appointment as Goodwill Ambassador. “Alberto’s commitment to refugees is truly exceptional. For six years he has listened to their stories and shared the realities of forced displacement with a wide audience,” said Manly.

“In his journalism, he excels at conveying empathy and solidarity with refugees and how sports can open the way for inclusion”.