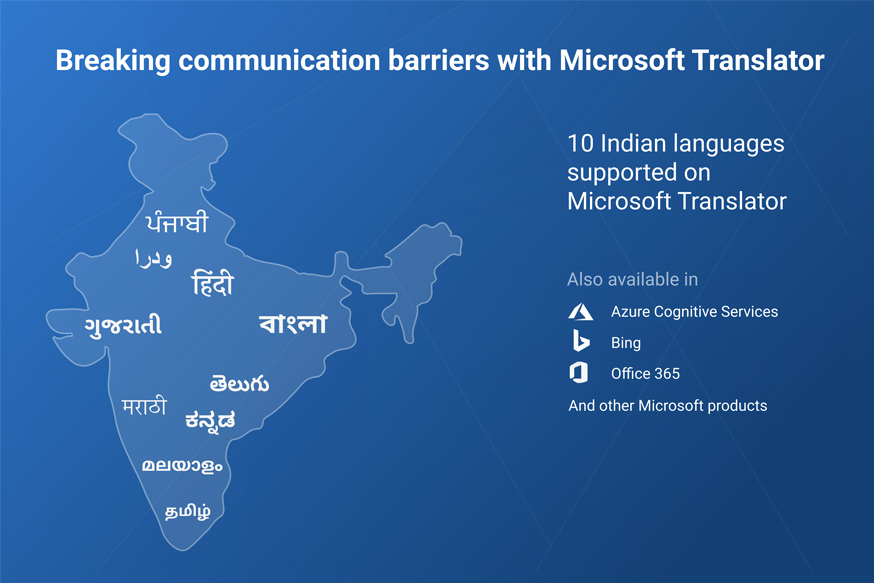 This takes the total number of Indian languages supported to 10, including Bengali, Hindi, Tamil, Telugu, and Urdu. With this, the service will now allow over 90% of Indians to access information and work in their native/preferred languages, making computing language-agnostic and more inclusive in the country.

For organizations of all sizes, Microsoft provides APIs on Azure that they can use in their products to conduct their business across the country and globally in different languages. Businesses can easily integrate the Microsoft Translator text translation API into their applications websites, tools, or any solution requiring multi-language support, including e-content translation, e-commerce product catalogues, product documentation and internal communication among others. The Microsoft Translator service is part of the Azure Cognitive Services API collection of machine learning and AI algorithms.

Sundar Srinivasan, General Manager, Microsoft India (R&D) Pvt. Ltd., said, “We’re committed to empower every Indian and every business in India by bringing the power of AI into their daily life. Microsoft celebrates the diversity of languages in India and wants to make the vast internet even more accessible. We have supported Indian languages in computing for over two decades, and more recently have made significant strides on machine translation across languages. With this release, we are bringing in cutting edge machine learning tech to democratize access to information for everyone in India.”

Since early 2000s, Microsoft has been pioneering the traditional Statistical Machine Translation (SMT) paradigm to translate global as well as Indian languages. The incorporation of Deep Neural Networks into translating complex Indian languages brings more accuracy and fluency to translation. While SMT is limited to translating a word within the local context of a few surrounding words, Deep Neural Networks has the capability of encoding more granular concepts like gender (feminine, masculine, neutral), politeness level (slang, casual, written, formal), and type of word (verb, noun, adjective). Microsoft continuously iterates the translation models keeping in mind tech advancement and usage, and releases newer and improved versions to all its users in a transparent manner. You can learn more about Microsoft Translator here.

Microsoft and Local Language computing: Microsoft has been consistently working to provide local language computing in Indian languages for over two decades since the launch of Project Bhasha in 1998, allowing users to input localized text easily and quickly using the Indian Language Input tool. Microsoft also announced support for email addresses in multiple Indian languages across most of its email apps and services. Through its global Local Language Program (LLP), Microsoft provides people access to technology in their native language.