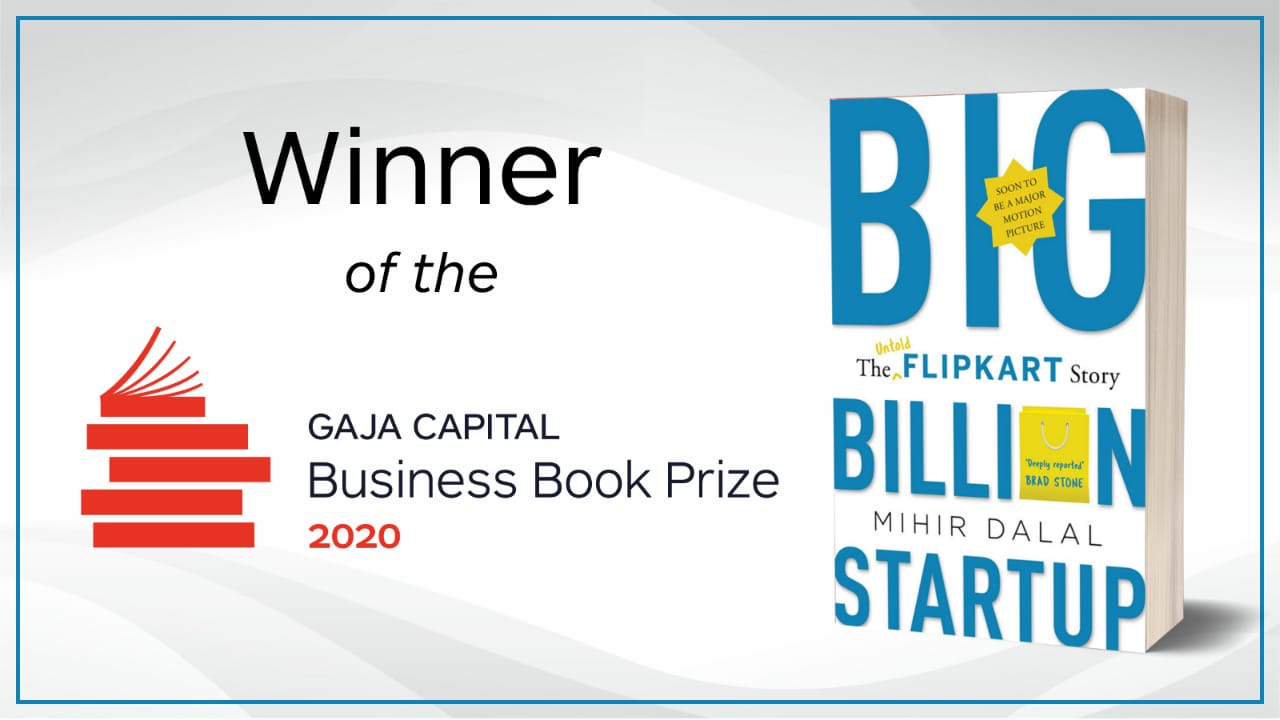 Big Billion Startup: The Untold Flipkart Story, the definitive account of the biggest start-up that redefined India’s e-commerce, by investigative journalist Mihir Dalal has been announced as the winner of the Gaja Capital Business Book Prize 2020.

The winner was selected from an eclectic and compelling shortlist of six books, showcasing the vibrant Indian business ecosystem. Established by the Gaja Capital last year, a leading equity firm, the Gaja Business Book Prize is one of the leading initiatives connecting the worlds of business and writing. With a purse of INR 15 Lakh for the winner, it is the biggest business book prize in the country to honour authors and their chronicles celebrating the spirit of entrepreneurship in India.

While announcing the winner virtually this year, Gopal Jain, Co-Founder and Managing Partner, Gaja Capital, said, “The Indian growth phenomenon – is one of the great stories of the 21st century. It needs to be told. Narratives inspire and build conviction – India has many successful entrepreneurs and businesses. The world should speak of them just as we speak of the world because you don’t have to be Western to be Modern. As Investors and entrepreneurs in the Indian market, we have witnessed several such journeys first-hand. The Gaja Capital Business Book Prize was instituted in 2019 to encourage Indian writers, journalists and entrepreneurs to tell our stories and tell them well, for the world.”

The jury for the second edition comprised stalwarts from the worlds of industry, investments, academia, public policy, and governance including:

The 2020 shortlist consisted of a diverse range of stories of enterprises and their protagonists including : the Unicorn story of Flipkart in Big Billion Startup by Mihir Dalal; the exposé of Ranbaxy in  Bottle of Lies by Katherine Eban; HDFC Bank’s digital revolution in HDFC Bank 2.0 by Tamal Bandyopadhyay; the riveting account of Bigbasket’s leadership in Saying No to Jugaad: The Making of Bigbasket by TN Hari and MS Subramanian; the 70 year journey of Hero in The Making of Hero by Sunil Munjal and the bold and adventurous journey of a Venture Capitalist in India in The Moonshot Game by Rahul Chandra

“The 2020 edition of The Gaja Capital Business Book Prize has had an extraordinary list of submissions featuring an outstanding list of books, and our shortlist featured a brilliant range of stories of Indian enterprises and their protagonists. In addition to the narrative power and research behind these individual stories, the jury also considered how these outstanding chronicles can inspire and educate young entrepreneurs – and were unanimous in choosing Big Billion Startup by Mihir Dalal as the winner of the 2020 Prize.

Through this incisive and deeply researched book, Mihir Dalal aims to answer the critical question: What will the internet economy in India look like? The Flipkart story reminds us that Indian entrepreneurs will forge their own independent paths of innovation serving a diverse and very demanding Indian consumer.

Mihir Dalal gets under the skin and takes no prisoners. This is a must read.