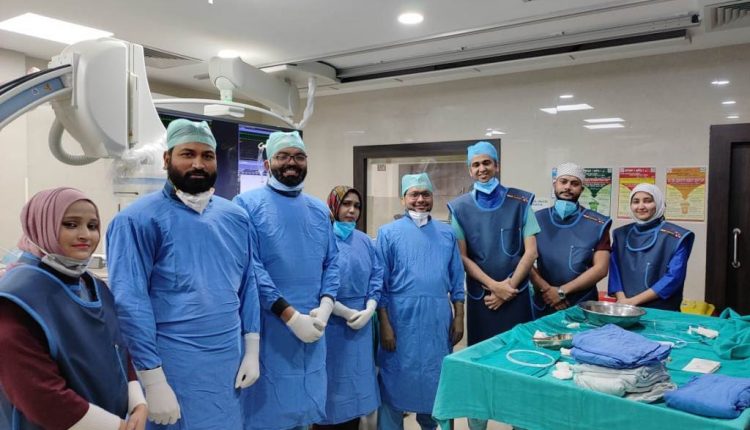 Minimal Invasive Vascular Intervention with Angio-Embolization on teenager at AMU

Aligarh : Parents of a 13-year-old boy were beset with difficulties after private hospitals failed to cure their son suffering with Nasopharyngeal Angiofibroma, a rare benign tumor of the space at the back of the nasal cavity that connects the nose to the mouth—the boy in early teens always remained racked in pain with incessant breathing problems, blood oozing out from nostrils and runny nose that stayed for days.

They were in depths of despair until they reached the Department of OTO-Rhino-Laryngology (ENT), Jawaharlal Nehru Medical College (JNMC), Aligarh Muslim University (AMU)—where after a requisite diagnosis, a treatment plan was charted out to combat the boy’s illness. Dr Saifullah Khalid, Associate Professor of the Department of Radiodiagnosis performed a successful preoperative Angio-Embolization on the adolescent and thus began the Minimally Invasive Vascular Intervention services at JNMC.

“It is a remarkable day in the history of JNMC as Dr Saifullah Khalid has begun the vascular interventional radiology services at the Department of Radiodiagnosis with the successful Angio-Embolization done on the boy with Nasopharyngeal Angiofibroma. It is hoped that many such patients particularly from the lower income groups will be treated at JNMC instead of private hospitals charging exorbitant fees”, said the Vice Chancellor, Prof Tariq Mansoor while extending congratulations.

Dr Saifullah conducted the procedure in the Paediatric Cath Lab with the help of Dr Mehtab Ahmad and Dr Aftab Ahmad.

Dr Shaad Abqari and his team from the Department of Paediatrics helped in arranging equipment and support for the case.

With the beginning of vascular interventional radiology services, JNMC has joined the list of specialised centres mostly situated in metropolitans across the country where difficult Angio-Embolization procedures are conducted.

Dr Saifullah Khalid started working at the Department of Radiodiagnosis, JNMC after completing DM Neuro-interventional Radiology from PGI Chandigarh. He is specially trained in Angio-Embolization procedures and also in the treatment procedures related to brain strokes, paralysis and brain tumors in which immediate surgery without embolization is not possible.