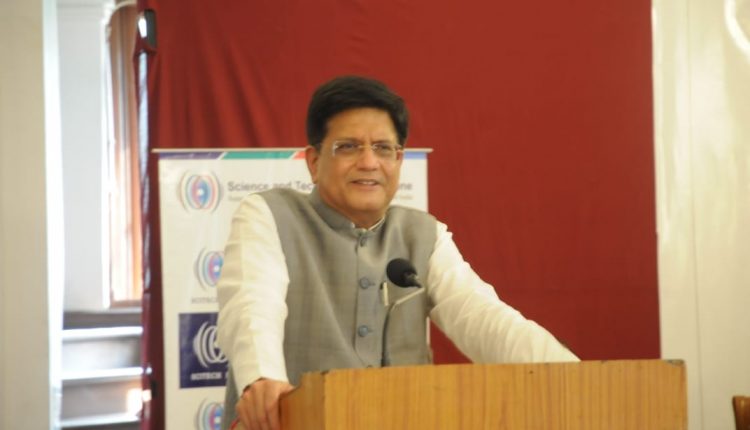 New Delhi: The Minister for Commerce & Industry, Textiles, Consumer Affairs and Food & Public Distribution, Shri Piyush Goyal today said, it is encouraging that 46 percent of start-ups registered with DPIIT have women as part of eco system. He hoped that woman will lead Start-up culture in Maharashtra. He further said, today we have startup ecosystem across length and breadth of India. More than 50000 sartups have been registered in India. It is third largest ecosystem in world.

Informing that as per DPIIT registrations, Pune has 3200 Start-ups whereas Mumbai 3274 Start-ups, Minister suggested that this healthy competition between Pune and Mumbai should continue.

Recalling the contribution of social reformer and educationist Savitribal Phule, he said that Savitribai had started first girls school in Pune, so it is befitting that women entrepreneurs showcase their work in this Science Technology Park in Pune.

Comparing Incubators with parents, minister added that they are like guide and supporter that start-ups need. Describing Pune’s unique position to support start-ups due to presence of industry, IT and finest academic institutions minister added that it is time to increase international collaboration in start-up ecosystem.

He expressed need for collaboration of Academia, industry and research for thriving of Start-ups.

The minister further informed that it is heartening to note that out of 79 Unicorns in India, 4 are from Pune. Sci-Tech Park in Pune University has 153 start ups.

Noting that some of the innovations showcased in today’s Science and Technology Park for Divyang people were exciting, he hoped to see more innovations for farmers, divyang and poor.

Stressing that government involvement always stifles industries’ progress, the Minister gave example of decades of sixties and seventies when industrial progress was hampered due to government interventions. He went on to add that no Unicorn today would have reached this position solely based on government support.

Minister said that way forward can only be in a way where architecture of Start-ups is drawn by entrepreneurs while government will only provide support in the form of facilitator.

However he added that some initiatives like Covaxin are good example of government and industry collaboration.

He concluded that India may have billion problems but it also has brilliant billion entrepreneurs to solve these problems with extremely cost effective solutions for farmers, Divyang and Poor.

Science and Technology Entrepreneurs’ Park, Pune, was established in 1986 jointly by Ministry of Science and Technology, Government of India and University of Pune. The Park, apart from various other ministries has been recently funded under Startup India’s Seed Fund Program.