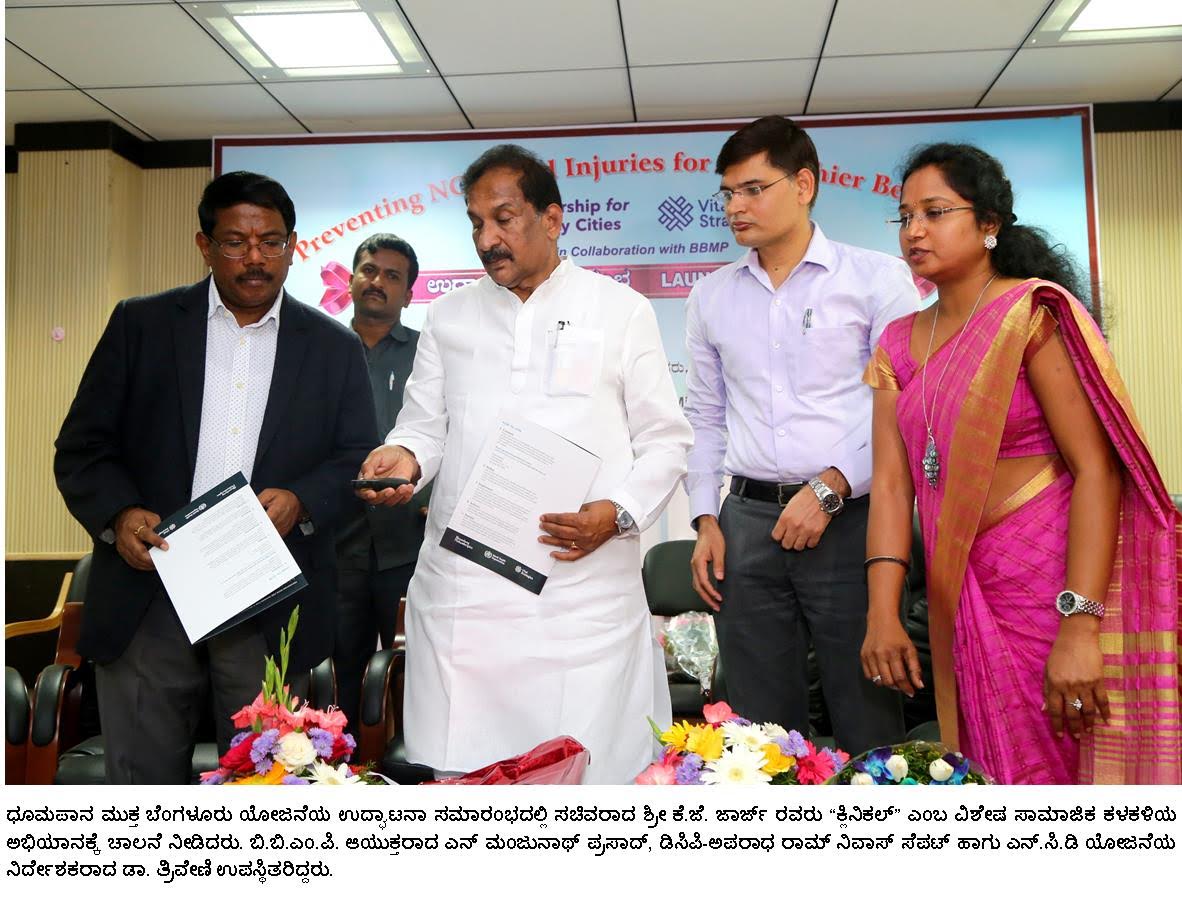 Bengaluru: The Honorable Minister for Bengaluru Development and Town Planning, Shri K J George, today announced the launch of a new initiative to make Bengaluru smoke-free as part of the city’s involvement in the Partnership for Healthy Cities. It is a global network of cities committed to reducing noncommunicable diseases (NCDs) and injuries. The Partnership is led by World Health Organization Global Ambassador for NCDs and former New York City Mayor, Michael R. Bloomberg.

The Cigarettes and Other Tobacco Products Act (COTPA) Section 4 prohibits smoking in public places. Violation of this provision is a fine extending up to Rs 200/-. In addition, public places are supposed to display smoke-free signage. Under the Smoke-Free Initiative, Bengaluru will work towards strengthening implementation of Section 4, which will help to reduce exposure to second-hand smoke (SHS) and its ill effects on people’s health.

Launching the Partnership initiative and unveiling a new communications campaign entitled “Clinical,” Honorable Minister Shri K J George said: “Bengaluru is home to 14% of the entire state’s population. Becoming a smoke-free city will protect the health of a large number of people.” He also stressed that: “Hookah is as dangerous as cigarettes. Currently, some eateries and restaurants are not compliant with COTPA rules. Hence, all the restaurants and eateries which are not compliant will be brought under strict norms of COTPA.”

Bengaluru is one of more than 50 cities chosen to participate in the global Partnership for Healthy Cities network. The city’s Partnership initiative is the Bengaluru Smoke-Free City Initiative, which is aims at strengthening the implementation of NCD Policy in the city, with a focus on protection from second-hand smoke. Bengaluru’s municipal corporation, Bruhat Bengaluru Mahanagara Palike (BBMP), will work alongside the partnership’s implementing partner, Vital Strategies, to accelerate this high-impact policy intervention. Twenty million people in Karnataka consume tobacco in some form. According to the Global Adult Tobacco Survey (GATS) and the Global Youth Tobacco Survey (GYTS), 37% of adults and 22% of youth are exposed to second-hand smoke in public places, increasing their risk of diseases like cancer, heart disease, stroke, and lung disease.

The Worshipful Mayor of Bengaluru, Shri R Sampath Raj, welcomed the initiative, saying: “Good health and wellbeing is important for our City’s people and our economy. We thank the Partnership for Healthy Cities for enabling Bengaluru to accelerate specific health initiatives that benefit our citizens, and look forward to engaging with global experts and colleagues in the Partnership over the coming year.”

Community Radios a Tool for Resilience in Haiti

Shri Manjunath Prasad, BBMP Commissioner, said: “It’s been a privilege that Bengaluru is part of the Partnership for Healthy Cities Initiative, led by Michael Bloomberg. BBMP has been working with Bloomberg Philanthropies on different issues. To protect people from the harmful effects of second-hand smoke, BBMP and the Police department will strengthen the enforcement of existing legislation, which will reduce smoking in all public places in Bengaluru as per COTPA Section 4.”

While talking at the launch event, Commissioner of Police, Shri T Sunil Kumar said: “Karnataka State Police has been implementing COTPA effectively over the last few years. Bengaluru city police alone have penalized over 65,000 people in the last four years, collecting more than 1 crore in fines. This initiative will help to strengthen public health by reducing exposure to second-hand smoke.”

The “Clinical” ad and #SmokefreeBengaluru social media campaign
Today also marks the launch of a digital media campaign entitled “Clinical,” featuring a 30-second Public Service Announcement (PSA), broadcast online in Kannada and English, which graphically shows how exposure to secondhand smoke causes heart attack and stroke. The campaign has been found to be highly effective in communicating the harms of SHS. An accompanying social media campaign on Facebook and Twitter, using the hashtag #SmokefreeBengaluru, aims to build awareness of the Smoke-Free City Initiative and encourage people to report violations of the city’s smoke-free laws on the website hosted by the Government of Karnataka, at http://cotpa.kar.nic.in

“There is no safe level of exposure to second-hand smoke, but many people don’t know about this invisible killer,” says Dr. Nandita Murukutla, Vice President, Global Policy and Research, Policy, Advocacy and Communication, Vital Strategies. “Our research and experience in working with government suggests that the PSA “Clinical” will help to change knowledge and behavior related to health risks of second hand smoke, increasing support for and compliance with Bengaluru’s smoke-free laws.”
About the Partnership for Healthy Cities

The Partnership for Healthy Cities is a prestigious global network of cities committed to saving lives by preventing noncommunicable diseases (NCDs) and injuries. Supported by Bloomberg Philanthropies in partnership with WHO, as well as Vital Strategies, this initiative will enable cities around the world to deliver a high-impact policy or programmatic intervention to reduce NCD risk factors in their communities. For more information, visit: https://partnershipforhealthycities.bloomberg.org/

Community Radios a Tool for Resilience in Haiti