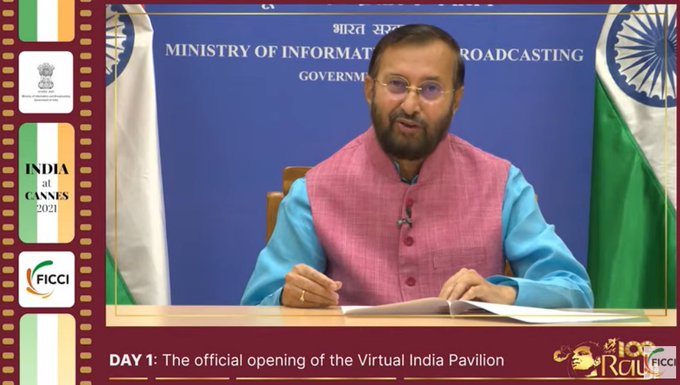 Addressing the virtual inauguration of ‘India Pavilion’ during the 74th Cannes Film Festival, organized by the Ministry of Information and Broadcasting, Govt of India, jointly with FICCI, Mr Javadekar said that this is the second year when the pavilions are virtually organized but the business is real including the creativity, talent, technology and India offers the best of these. “The virtual India pavilion can become a meeting place to meet and discuss the future of world of cinema,” he added.

Mr Javadekar further stated that many of the international films are being filmed in India with over 500 sites available. In order to attract more international film makers to India, he said that the government of India has taken a number of steps. “We have now opened up facilitation office which guarantees that all permissions are given in one go,” he added.

Mr Javadekar informed that a lot of Hollywood movies have got their VFX animation done in India and India’s contribution to world films is also increasing. “Cannes Film festival is a festival of creativity and talent but simultaneously a place for business as well. Cannes Film market offers a big opportunity for the film makers of the world. Films will do huge business after the pandemic and many of the films are shot for OTT platforms also,” he added.

HE Mr Jawed Ashraf, Ambassador of India to France and Principality of Monaco said that Cannes Film festival has been an important window of Indian cinema to the world. He added that after the disruption and isolation of COVID, this festival will once again give an opportunity to reconnect with the global film fraternity. “There will also be opportunity to promote international collaboration and promote India as a venue for film shooting along with the impact of OTT digital platforms on local cinema industry. Indian cinema is a mirror to our diversity, our heritage, openness and nothing unites India like cinema. Our journey as an independent nation has been best shown by the Indian cinema,” he added.

Mr Amit Khare, Secretary, Ministry of I&B, Govt of India said that India is one of the largest producers of cinema. “Despite the challenges being faced by the pandemic, we are showcasing our cultural and cinematic heritage along with the advancements made in film making at the India Pavilion,” he added. This year, he said also marks the beginning of the 75th year celebration of India’s independence along with the centenary year celebration of Mr Satyajit Ray.

Ms Neerja Sekhar, Additional Secretary, Ministry of I&B, Govt of India said that cinema has united us during the pandemic times. This festival gives us an immense opportunity to see the best in cinema and also offers an opportunity to Indian film makers to share the best of talent and content to the world.

Mr Prasoon Joshi, Writer, Poet and Chairman, CBFC said that the Indian cinema along with the film makers are going in the right direction today along with the focus on regional cinema. “Indian audience today are more of active seekers and the pandemic has given more acceleration to explore the world of cinema. There is a churn in Indian cinema,” he added.

Mr Subhash Ghai, Filmmaker & Educationist; Chairman, Mukta Arts Ltd said that cinema is the first love for the people of India as it entertains, enlighten them and hence it reflects the part of our life. “Cannes film festival in itself is a great hub for international film makers. The young population of India is picking up cinema with a lot of enthusiasm as career and is coming up with newer ideas which is very encouraging,” he added.

Ms Ekta Kapoor, Joint MD, Balaji Telefilms said that India is known as a content creating nation and we have a lot of local inbuilt flavours in Indian storytelling. “Indian content has always been the soft ambassador of India and it has a lot of appeal in international market. Collaborations are the way forward for any company and there are a lot of opportunities in India,” she added.

India has participated at the Cannes Film Festival 2021 virtually due to the prevailing coronavirus pandemic. At the virtual pavilion, India will focus on celebrating the birth centenary of the legendary filmmaker, Mr Satyajit Ray, promoting India as an important shooting destination and improving co-production between Indian filmmakers and foreign counterparts.

Edtech Startup for ‘Bharat’ students – Vidyakul expands to 10 state boards, aims to offer 1000+ courses to 5 million+ students of Tier 2 and beyond cities