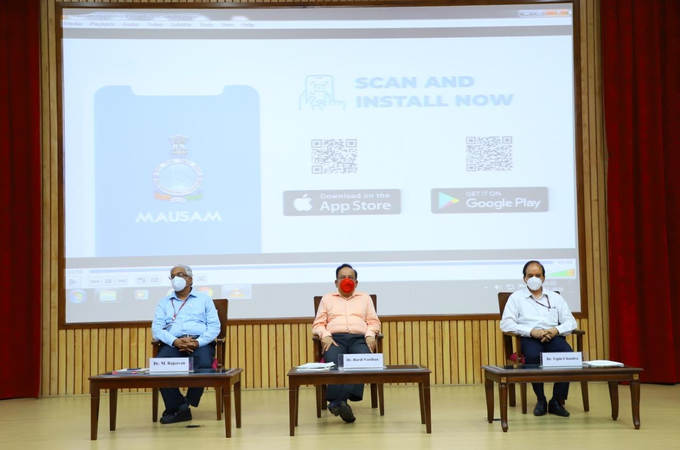 New Delhi: Dr. Harsh Vardhan, Union Minister for Health & Family Welfare, Science & Technology, and Earth sciences today said that “The Ministry of Earth Sciences is a unique organization in the world which looks holistically at all branches of Earth Science – Atmosphere, Hydrosphere, Cryosphere and Lithosphere”, and added that “India is the only country with a fully dedicated ministry solely addressing all the aspects of Earth Sciences. This helps in developing an integrated approach in planning and resolving major concerns in a holistic manner with least time delay. The Ministry has attained many significant achievements in the recent past, which are considered to be of global standard for other countries to follow.”

Dr Harsh Vardhan was speaking at an event to celebrate the Foundation Day of the Ministry of Earth Sciences (MoES) celebrated here today. The MoES was formed in 2006 by a merger of the India Meteorological Department, the National Centre for Medium Range Weather Forecasting, the Indian Institute of Tropical Meteorology, the Earth Risk Evaluation Centre and the Ministry of Ocean Development.

Stating that “the Earth science is a combination science that draws upon all other sciences to unlock Earth’s mysteries. It is unique and yet interdependent. Earth science empowers us to think globally and act locally — to make sound decisions about issues important in our lives as individuals and citizens”, Dr Harsh Vardhan emphasised that “People who understand how Earth systems work, can make informed decisions. They can debate and resolve issues surrounding clean water, urban planning and development, national security, global climate change and the use and management of natural resources”. He added that “ In the 21st century, we need to be informed citizens. And earth science takes us exactly there.” He said, “that the “Earth Science skills”, become “life skills”, and therefore the earth sciences ministry can easily be seen as the “Life Skills Ministry.”

The Minister pointed out that “On weather and climate sciences, India has one of the best Weather Services in the world for Disaster Management with accurate warnings on Tropical Cyclones, Heat Waves and Floods. The IMD provides tropical cyclones and storm surge advisories to 13 member countries under the ESCAP Panel.”

He said, “India has also developed an Earth System Model for future climate projections for the first time. This model capability is at par with other modelling centres in the USA, UK, Australia, Japan and Germany. MOES has launched an experiment to understand and document merits and demerits of Artificial Rainmaking – Cloud Seeding -by conducting experiments with two aircrafts in two years. This experiment has collected 234 samples of clouds to demonstrate the efficiency of cloud seeding. This kind of large scale cloud seeding experiments are carried out by very few countries like the US.”

Dr. Harsh Vardhan announced that “On the Setting up of Atmospheric Research Testbeds, a unique facility in Tropics will be launched in 2021 with the first phase of instrumentation. This open field observatory is planned to be spread over 100 acres of land (50 km away from Bhopal) and is proposed for a better understanding of the monsoon clouds and land surface processes. This centre will have state-of-the-art observational systems such as RADARS, WIND PROFILERS, UAVs etc. Very few countries have these kinds of research testbeds.”

On the occasion, MoES-Knowledge Resource Centre Network (KRCNet) and mobile App “Mausam” for India Meteorological Department, were also launched. The Secretary, MoES, Dr Rajeevan also announced the list of awardees of scientists and employees of the ministry for their exemplary work.

Dr. Rajeevan, in his welcome address, outlined various achievements of the Ministry and gave a roadmap of other initiative that the Ministry is planning in near future.

The Ministry of Earth Sciences (MoES) is mandated to provide the nation with the best possible services for weather, climate, ocean, coastal and natural hazards, for the Public Safety and socio-economic benefits. The Ministry also deals with exploration and sustainable harnessing of ocean resources (living and non-living), and plays a nodal role for Antarctic/Arctic/Himalayas and Southern Ocean research.

He pointed out that “During the last few months, IMD’s accurate prediction of tropical cyclones Amphan & Nisarga and excellent field work by disaster management agencies helped saving thousands of precious lives”. He said, “During the next five years, MoES has ambitious plans of (i) development of a manned submersible to carry 3 scientists to a depth of 6000 metres in the ocean with suit of scientific sensors and tools , (ii) development of an Integrated Mining System will be developed for mining Polymetallic Nodules from 6000 m depth, (iii) Increase the number of Doppler Weather Radars from the current number of 28 to about 50, (iv) Integrated meteorological services for the north-eastern region, (v) Augment the existing High Performance Computing System from 10 PFlops to about 40 PFLops and (vi) Improve the horizontal resolution of the weather forecast model from existing 12 km to 5 km to help farmers in obtaining block level forecasts.”

MoES has developed and commissioned an Integrated Flood Warning System for Mumbai (IFLOWS-Mumbai) in close coordination with Municipal Corporation of Greater Mumbai, Govt of Maharashtra. to aid in the mitigation activities of the flood prone city of Mumbai.

Two new Doppler Weather Radars (DWR)s were commissioned at Sonmarg, J&K & Mukteshwar under the Integrated Himalayan Meteorology Programme (IHMP). Eight more DWRs will be commissioned within next one year.

MoES is installing six new water desalinations plants in Lakshadweep islands, each with a capacity to produce 1.5 lakh litres of water every day, with the help of for the Ministry of Drinking Water and Sanitation and Lakshadweep administration. The first of these six plants installed at Kalpeni started generating potable water on 09th January 2020.

Augmenting Coastal and Oceanic Research capabilities of the country have always been a priority for the Indian Government. A new Coastal Research Vessel “SAGAR ANVESHIKA” was commissioned in February 2020. This is by far one of the most remarkable developments in the history of India’s coastal research with India’s private sector partnering the Government and boosting the vision of ‘Make in India’.

At the end, a Video Recording of the talk on “Ocean Science for the 21st Century” by Margaret Leinen, Director, Scripps Institution of Oceanography & Vice Chancellor, University of California-San Diego, was shown.