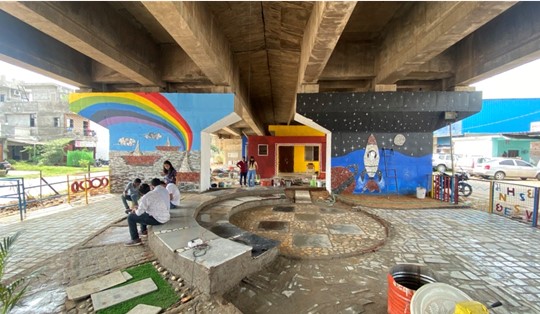 – Over 70 trials and pilot projects implemented between July and October 2021 by cohort of cities shortlisted under the Nurturing Neighbourhoods Challenge, to make public spaces friendlier for young children and caregivers across India

– 10 finalist cities, selected by an expert jury, will receive technical assistance to scale up interventions over the next two years

Following the challenge kickoff in November 2020, over 60 city agencies nationwide responded to an open call for proposals to implement neighbourhood-level pilot projects to enhance the physical and psychological health of infants, toddlers, and their caregivers. Shortlisted by an expert committee in February 2021 based on the strength of their proposals, 25 cities received technical assistance and capacity building over the next 7 months to demonstrate early wins, solicit citizen participation, and build consensus around their projects. In addition to the finalist cities named above, the cohort included Agartala, Coimbatore, Dharamshala, Erode, Hyderabad, Kota, Nagpur, Rajkot, Ranchi, Rohtak, Salem, Surat, Thiruvananthapuram, Tiruppur, and Ujjain.

Between July and October 2021, over 70 early childhood-oriented experiments, tactical trials, and pilot projects were implemented by the cohort cities in and around neighbourhood parks, streets, transit facilities, Anganwadi, public health centres, and other public spaces across India. The interventions are estimated to reach more than 1 lakh infants and toddlers and benefit over 1 million people. Cities largely focused on improving safety, comfort, and access to the public realm for young children and caregivers, particularly those in informal settlements and vulnerable communities, while creating opportunities for play, social interaction, and connection to nature. In addition, cities collected baseline data for over 30 indicators of infant, toddler, caregiver-friendly neighbourhoods, conducted public engagement activities, and capacity building of over 200 local champions. With the selection of 10 winning cities, the challenge moves into its final phase, where the selected cities will be supported through deeper engagement to scale up interventions over the next two years.

Shri Manoj Joshi, Secretary, MoHUA, said: “In an emerging paradigm at the Ministry, for the first time we are taking the lens of certain citizen groups to reimagine our cities. In partnership with the Bernard van Leer Foundation, we are investing in cities to nurture early childhood development and to make them work for caregivers. Changes led by the Nurturing Neighbourhoods cohort are transforming how we plan, design, and manage Indian cities to be healthier, more inclusive places for young children to grow up, which consequently enhances the quality of life for all.”

Shri Kunal Kumar, Joint Secretary and Mission Director, Smart Cities Mission, MoHUA, said: “Investing in cities that nurture early childhood development and work for caregivers is a new and unique lens for looking at urban development and citizen experience in India. Never before have city engineers in India’s urban local bodies been asked to look at cities from 95 cms above ground- i.e. height of a toddler. Through the Nurturning Neighbourhoods Challenge, Smart Cities, for the first time, are re-imagining their neighbourhoods to work for infants, toddlers and their caregivers. Because of this challenge, we now understand better that access to a safe, supportive public realm during the critical early years of a child’s life is essentially linked with strong long-term social, economic, and developmental outcomes. We look forward to seeing the 10 winning cities announced today become ‘lighthouses’ for this approach, sharing their learning with the rest of the country and others across the world.”

Ms. Rushda Majeed, India Representative, Bernard van Leer Foundation, said: “We extend our heartiest congratulations to all the winners and everyone involved in making the Nurturing Neighbourhoods Challenge such a success. It is encouraging to see the excellent quality of innovation and work done by cities keen to build a healthy, safe, and playful environment for babies, toddlers, and their families. From dumpyards and unused spaces being converted into play zones to microparks and well-equipped vaccination centres for young children, the effort put in by cities has been truly commendable. We at BvLF believe that when city leaders plan, design, and manage neighbourhoods from a child’s perspective, they not only make it safe, accessible, and fun for young children, but also support the child’s long-term health and well-being. And, ultimately, cities that work for babies, toddlers, and their caregivers work for everyone.”

Dr. O.P. Agarwal, CEO, WRI India, said: “It is heartening to see how Indian cities enthusiastically participated to make public spaces, streets and facilities more accessible to infants, toddlers, and their caregivers. We are thankful to the Smart Cities Mission, Ministry of Housing and Urban Affairs for providing cities a platform to ramp up early childhood-friendly interventions and to the Bernard van Leer Foundation for their support in making this work possible. I congratulate the 10 Nurturing Neighbourhoods finalists and others who strove for change on ground. Making our cities more walkable and accessible, with a focus on the most vulnerable, is critical to shaping a resilient, low-carbon and liveable future.”

The Top 10 Awardees of pilot stage of the Nurturing Neighbourhoods Challenge, with some highlights, in alphabetical order, are:

BENGALURU enhanced the safety of an anganwadi to foster independence in toddlers, refurbishing common areas, toilets, and play spaces with child-specific design standards.
HUBBALLI-DHARWAD introduced a shared pram service and priority seating on 100 Bus Rapid Transit buses, improving the public transport experience for pregnant women and caregivers.
INDORE provided a neighbourhood park previously inaccessible to young children and revamping it with lighting, plants, and recycled and natural materials.
JABALPUR pioneered a child-friendly public vaccination centre, with an outdoor play area and waiting for space for caregivers and young children, lactation rooms, and ramps for universal accessibility.
KAKINADA converted underutilized street space into a protected pedestrian plaza and toddler play zone in the heart of the city, accessible to nearby informal settlements.
KOCHI converted dilapidated residual areas around anganwadis into safe, shaded public spaces for women to gather and young children to play.
KOHIMA transformed a roadside garbage dump into a green, community-funded micropark and adapted a schoolyard into a multipurpose public space for young children and caregivers.
ROURKELA created formal play spaces in informal settlements and introduced lactation booths in public spaces for the convenience of nursing mothers.
VADODARA introduced a mobile play van to set temporary play areas for children living in areas lacking such opportunities and reclaimed play space from under a flyover for an adjoining Anganwadi.
WARANGAL improved play spaces in an Anganwadi and provided safer access to it by enhancing pedestrian infrastructure along streets and junctions in the area.

Bihar has shown tremendous growth and Initiatives on IT Front & Good Governance through e-Governance during covid pandemic – Jibesh Kumar, IT minister Govt. of Bihar