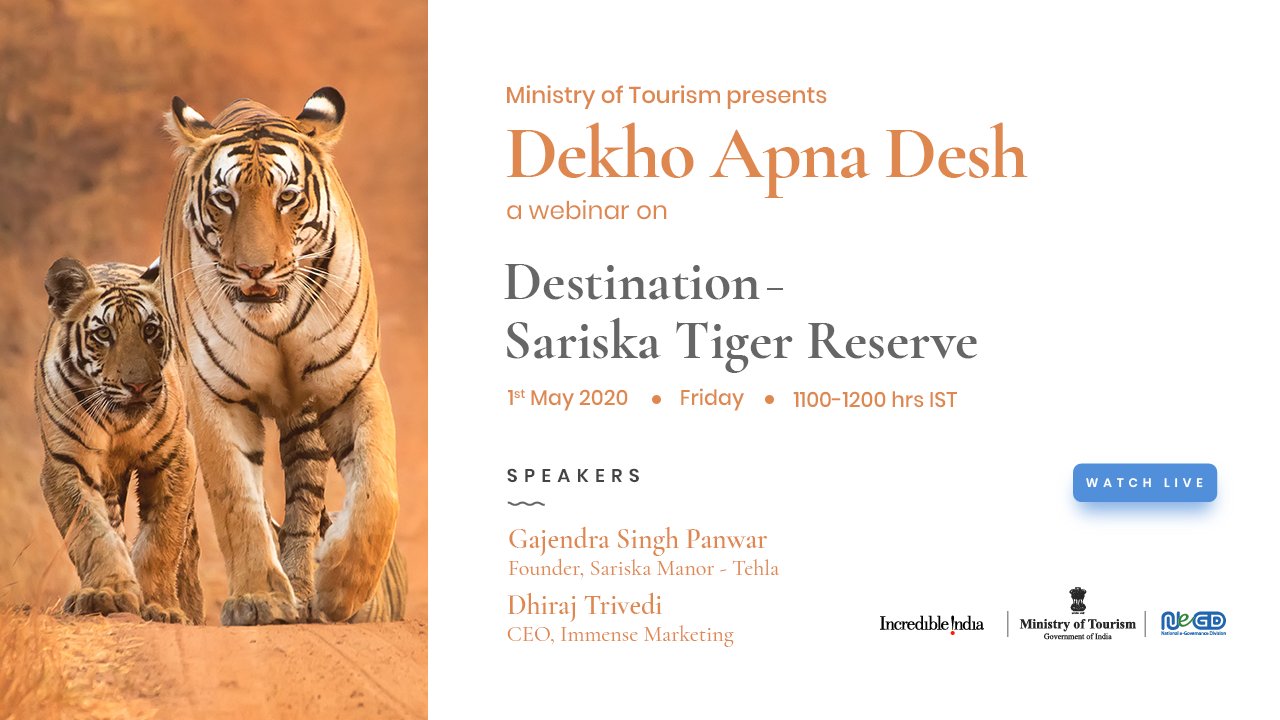 Wildlife Parks and Wilderness areas offer unique opportunities for independent experiences to everyone. The 13th session of Ministry of Tourism’s Dekho ApnaDesh webinar on 1st May 2020, titled, ‘Destination- Sariska Tiger reserve’ was a presentation and virtual tour of wildlife adventure, safari experience for the traveller within the Sariska Tiger Reserve’ in Alwar district, Rajasthan.

Sariska Tiger Reserve is located in the Aravalli Hills, 35 km from Alwar, 250 km SW of Delhi and 110 km NE of Jaipur. The former hunting reserve of the Maharaja of Alwar, the Sariska valley is home to a variety of flora and fauna. The park has populations of tigers, leopards, Nilgai, Sambar, chital etc. The place is a paradise for bird lovers as it shelters a large population of Indian peafowl, crested serpent eagles, sand grouse, golden backed woodpeckers, great Indian horned owls, tree pies, vultures and many others.

The sanctuary is strewn with ruins of ancient temples dating back to the 10th and 11th centuries. Some of the highlights are the ruins of the Kankwari Fort and the 10th century Neelkanth temples. The way to the temples is rough but the architecture and the Khajuraho-like carvings will simply leave the visitor in awe of the place. Neelkanth Mahadeva, houses the ruins of over 300 Hindu and Jain temples constructed between the 8th and 12th Centuries. Chand Baoli(step well) at Abhaneri is enormous with 3500 steep steps built by the Nikhumbha dynasty is one of the largest stepwells in the world. Alwar is a city dotted with heritage buildings, Forts, tombs and palaces. Some of the important sights not to be missed are Bala Qila, Vijai Mandir Lake Palaces, Fateh jung ki Gumbad, Moti Doongri etc.

Project Tiger is an ongoing Centrally Sponsored Scheme of the Ministry of Environment, Forests and Climate Change providing central assistance to the tiger States for tiger conservation in designated tiger reserves. India now has as many as 2,967 tigers in the wild, with more than half of them in Madhya Pradesh and Karnataka, according to the latest tiger estimation report for 2018. The population has increased by 33% since the last census in 2014 when the total estimate was 2,226. Maintaining the source values of tiger reserve populations through good management, protection and making the core areas inviolate through incentivized voluntary relocation of human habitation has been the most important reason for continued improvement in the status of tigers in India. Sariska is the first tiger reserve to have successfully relocated Royal Bengal tigers in India and at present there are around 20 tigers in the reserve.

For those who had missed these webinars, the sessions are now available on the https://www.youtube.com/channel/UCbzIbBmMvtvH7d6Zo_ZEHDA/featured and also on all social media handles of Ministry of Tourism, Government of India.

#DUSU constituted a Students Committee For Recommendations And Examination to discuss, among other issues, the mode of #examination