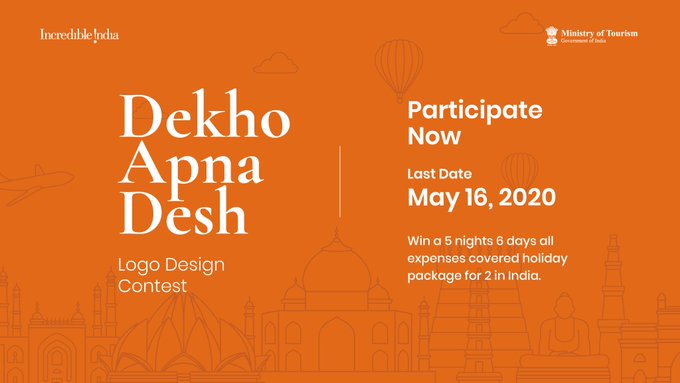 New Delhi: The Ministry of Tourism, Government of India today launched the ‘DekhoApnaDesh’ logo design contest on the MyGov platform. The objective of this contest is to have a logo for ‘DekhoApnaDesh’ campaign coming out of creative ideas of the citizens of the country.

DekhoApnaDesh is an initiative of the Ministry of Tourism which was launched by Union Minister for Tourism (IC) Shri Prahlad Singh Patel at Konark, Odisha on 24th January 2020 by releasing the content of the pledge during a function on Mygov platform. This initiative of the Ministry of Tourism is in line with the appeal of the Honorable Prime Minister made from the ramparts of Red Fort on 15th August 2019 in his speech asking every citizen to visit at least 15 destinations by the year 2022, to promote domestic tourism in India which is intended to enhance tourist footfalls in places of tourist interest so as to help develop the local economy.

Post lockdown and as the control over the spread of pandemic is achieved, it is widely agreed fact that domestic tourism will recover faster than international tourism. Focussing on domestic tourism potential, encouraging fellow countrymen to explore their own country, taking a much-needed break within their own borders will be a winning strategy for India.

During the lockdown period, the Ministry of Tourism, Government of India as part of its ongoing engagement with industry and its audiences is organising webinars on the overall theme of ‘DekhoApnaDesh’ . The objective of this webinar series is to create awareness about and promote various tourism destinations of India – including the lesser known destinations and lesser known facets of popular destinations.

DekhoApnaDesh” Logo design Contest activity is live on My Gov, and the link is :

The winner of the DekhoApnaDesh Logo contest will get a 5 nights 6 days all expenses covered holiday package for 2 to any destination in India from their residence in India . The contest terms and conditions are available on MyGov.in

Vice President wishes the nation on the eve of Buddha Purnima