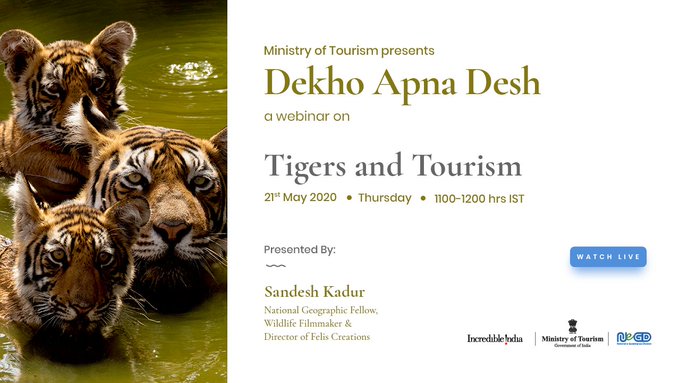 New Delhi: The Dekho Apna Desh Webinar of Tourism held on 19.05.2020 showcased the Tradition, Culture and Tourism of Bhopal, the capital city of Madhya Pradesh – ‘The Heart of Incredible India.’

Bhopal, the Capital city of Madhya Pradesh also called as City of Lakes with the two main Lakes Upper Lake and Lower Lake is famous for its Heritage sites, antique Jewellery, Fabric, Food and much more. The webinar enlightened the historical facts of Bhopal, combined with various anecdotes and the Historical must visit attractions of Bhopal. The heritage attractions of Bhopal can be experienced through the Old Bhopal walk which touches upon architecture, culinary flavours, the literary world of poet Iqbal, and the beautiful stories of the leading ladies from RaniKamlapati to Shah Jahan Begum.

The presenters showcased multiple experiences that Bhopal offers like ‘Paan’ ‘ Sulemani Chai,’ the embroidery work on silk, the Jeeps and much more. The session listed several historical places including the Minto Hall which is one of the example of the architectural marvel in Bhopal constructed by NawabSultan Jahan Begum. It is now been renovated as an International Convention Center without disturbing its originality. The various museums in the city which have a lot of unheard truth including the Tribal Museum showcasing tribal art and culture with its well planned and beautifully placed themed galleries found mention in the webinar.

The land of lakes is a cherishing destination for tourists of all tastes. Bhopal is a multi-faceted destination, i.e. from being a historical heritage site to a land rich in biodiversity in its purest form. Apart from Bhopal, the other important Tourist attractions in Madhya Pradesh are Sanchi, Vidisha, Khajuraho, Mandu, Bhimbetka, Indore, Ujjain, Gwalior, Chanderi and the national parks Kanha , Bandhavgarh , Panna and Pench etc.

The Dekho Apna Desh Webinar Series is presented with support of National e-Governance Division (NeGD) of Ministry of Electronics & Information Technology (MeitY). Sessions of Webinar are now available on the https://www.youtube.com/channel/UCbzIbBmMvtvH7d6Zo_ZEHDA/featured and also on all social media Handles of Ministry of Tourism, Government of India.