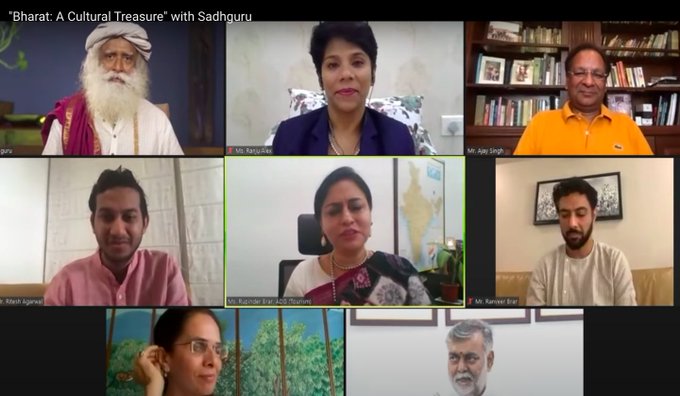 Addressing the welcome note, Minister of State (I/C) for Tourism and Culture, Shri Prahlad Singh Patel, emphasised  the significance of yoga, which has been a tradition passed on to Indians by our forefathers who practiced and became gurus of yoga since the ancient times. He also applauded the initiatives undertaken by Prime Minister Shri Narendra Modi who has relentlessly encouraged the citizens of our country to ensure physical and mental health through yoga.

As the conversation began moderator Ms. Rupinder Brar introduced the first panelist Mr. Ajay Singh CMD, SpiceJet who mentioned about how the airline industry was focusing on expanding its operations slowly and steadily to promote tourism once again post COVID. Revealing a very interesting and unknown fact about the Sadhguru, Mr Ajay apprised the audience on how Sadhguru is also a helicopter pilot himself and belongs to the aviation family. He continued by asking Sadhguru what drives his passion to fly and what are the most fascinating places he has visited in India that he would like to encourage people to visit. Sadhguru replied to this by saying that the madness of flying came to him at an early age and once he had also built himself a hang glider. He mentioned that his fascination for birds drives his excitement of flying. Sadhguru was of the opinion that India should utilise helicopters more extensively so that the diverse terrains of India such as the Western Ghats, Himalayas, northeast, etc are made accessible to a greater number of tourists. He suggested that one must definitely visit the Himalayan and Western Ghats ranges if the terrains interests them and if one wants to acquire spiritual awakening there are multiple spiritual destinations that offers just that which is not available anywhere in the world. Tourism in India needs to be exploited in its right sense, is what the visionary believes.

Moving forward, Ms. Ranju Alex, Vice President (Marketing)– Marriott took on the next part of the session describing how women in Indian culture have been perceived as the care giver and an epitome of warmth in a family, given the fact that women are naturally blessed with the grace of hospitality. Despite such an honourable perception, the workforce of women in the Indian hospitality industry comprises just of 12%. Ms Ranju asked Sadhguru on how he thinks we can combat this crisis and bring these incredible women in the industry both as participants and travellers traveling across the Incredible India.

Sadhguru replied to this question by denoting that increasing the percentage of women workforce in hospitality industry needs a lot of cultural and economic changes, family situations, how we look at child bearing, etc that are deeply embedded in our culture and might take a long time to change, but surely things are changing with time and hopefully an increase in the percentage will be seen in the near future.

The next matter of the discussion was taken forward by Mr. Ritesh Aggarwal, Founder and Group CEO, OYO who emphasized on rural tourism in India and its impact. He quoted that villages are the heartland of India and we’ve known from our textbooks that agriculture, farming and villages are the heart and soul of our country. The current situation and the pandemic have made it possible for us to understand the value of rural treasures of our country and encouraging us to take a massive step towards Dekho Apna Desh i.e. seeing our own country. He went on to understand Sadhguru’s opinion on how we can create a sustainable tourism movement bringing in opportunities for the farmers and tourists to go see the local villages and to inspire a tourism movement in such places while preserving the aesthetics and identities of such places.

To this Sadhguru responded with a very constructive idea that he himself has been wanting to work on. He suggested that clusters could be developed in a particular region so that they can be easily controlled and promoted by highlighting the authentic behaviour of the ethnic groups, farmers and villagers. Discrepancies can be avoided by managing such clusters which have interesting cultural features. Such steps can help authorities and aggregators in raising the flag of responsible tourism as well as encourage tourists to become responsible.

Mr. Ranveer Brar, Celebrity Chef, another panelist of the session wanted to know how to bridge the disconnection between Indian culinary and western culinary owing to the fact that Indian food is more about the taste and nourishment but modern western food involves more science of health benefits.

Sadhguru answered this question citing his personal experiences and noting that making the habit and communicating people about the significance eating fresh food will help in bridging the gap between desi and western cuisines. The importance of presenting it the most authentic way will help non-Indians perceive Indian food the way we perceive.

Lastly, Ms. Anita Dongre, Fashion Designer shed light on one of the most crucial topic of the present day. She said that today we tend to follow trends easily and do yoga for the sake of it but we need to look at yoga as what it could provide to our mind and body instead of how it makes us look to the world.

Sadhguru agreed with statement and added by saying today many young people have been recorded to have taken their lives .This, he said, comes from our education system that lacks the fundamentals of how to manage our thoughts and chemical reactions of our mind. Yogic system has an elaborate system to create the right chemistry of our body and mind. Yoga helps one to achieve a blissful chemistry which helps to control our external situation that can frequently fluctuate. Only when one does not have a fear of suffering one will be able to live the depth and dimensions of life. If you want to unleash human geniuses you must be free from the fear of suffering.

The session ended with Minister Shri Prahlad Singh Patel delivering his vote of thanks to Sadhguru for sharing his wisdom and knowledge for today’s session.

The Dekho Apna Desh Webinar series, launched on 14th April 2020, till date has conducted 34 sessions showcasing the varied tourism products and experiences that India offers across the country. The Webinar went live on the youtube channel of Mygov Indi and feeds were carried by multiple social media handles including Incredible India. The Webinar has attracted a viewership of 6100 on the MyGov India Youtube Channel, 1100 views on the youtube channel of Incredible India and 4300 views on the flyspicejet.com.

The National e-Governance Division (NeGD) created by the Ministry of Electronics & Information Technology (MeitY) has been playing a pivotal role in supporting the Ministry in conducting of the Dekho Apna Desh Webinars by providing technical assistance directly with a professional team thereby ensuring effective citizen engagement and communication with all stakeholders using the digital experience platform.

The sessions of Webinar are now available on the https://www.youtube.com/channel/UCbzIbBmMvtvH7d6Zo_ZEHDA/videos and also on all social media Handles of Ministry of Tourism Government of India.