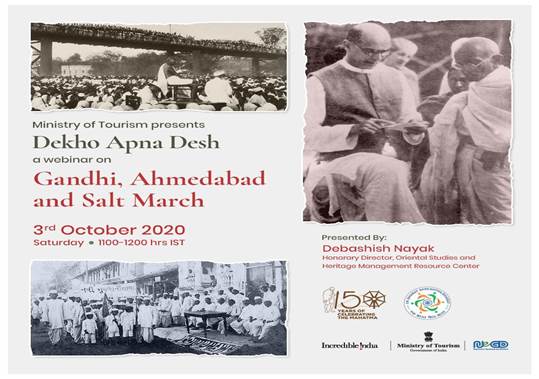 New Delhi: This year the Ministry of Tourism is saluting the father of Nation on web screen on this birth anniversary, paying ode to his philosophies and teachings with a series of webinars starting on 1st October. In this series, the Ministry presented a session titled Gandhi, Ahmedabad and Salt March on 3rd October 2020.

After Returning from South Africa in 1915 Gandhiji was advised by Shri Gopal Krishna Gokhale to travel across India and decide his future place to initiate his freedom movement. Gandhiji finally chose Ahmedabad and continued till 12th March 1930 when he left for his famous Dandi March to break the Salt Act on 6th April morning and was finally arrested on 5th May and taken to Pune.

Setting the tone for the Webinar, Mr. Jenu Devan presented the initiatives taken by the Government of Gujarat with Ministry of Tourism in identifying those places associated with Mahatma Gandhi and development of tourist infrastructure in the Gandhi circuit covering Ahmedabad- Rajkot-Porbandar-Bardoli-Dandi taken up and sanctioned under the Ministry of Tourism assisted Swadesh Darshan Scheme. He mentioned how Government of

Mr. Debashish Nayak spoke about the support received from people by Gandhi during his days in Ahmedabad. When Gandhi returned from South Africa, it was in Ahmedabad that he chose to set up his base. He lived in Ahmedabad between 1913 and 1930. It was from here that he launched the historic Dandi March (Salt March) in 1930.

Prime Minister Narendra Modi will participate in the meeting…

BatX Energies and TransCreation Lift the Winners Trophy at…

Mr. Debashish Nayak also recounted how the stay of Gandhi ji in Ahmedabad was very eventful and listed the many national level initiatives taken by Gandhi ji , including foundation of Gujarat Vidyapith in 1920. Throughout his stay Gandhiji was supported by the people of Ahmedabad and many memories are associated with it.
The Sabarmati Ashram still echoes with the spirit of Mahatma Gandhi. The City of Ahmedabad was important in sowing the seeds of the peoples movement that Mahatma Gandhi led. It is in his years in Ahmedabad between 1915 and 1930 that he managed to experiment and then transform Indias freedom struggle from a small scale upper class initiative to a mass movement. Within few months of his landing in India from South Africa in 1915, Gandhi set up a Satyagraha Ashram in Ahmedabad.

In 1917 a deadly plague had spread to Ahmedabad. This created a panic and prices of basic commodities started soaring. The plague subsided by January 1918 but the prices of essential commodities continued to rise. The mill workers wanted a permanent rise and improvement of working conditions. Gandhi decided to go on indefinite fast in solidarity with the mill workers on the 15th of March. The mill owners agreed to 35% pay raise after an arbitration and Gandhi broke his fast on 18th March 1918.

The speakers also touched upon how Gandhi inspired people all over the world, including one of the United States most famous civil rights leaders, Martin Luther King Jr. King learnt about Gandhi through his writing and a trip to India in 1959. King drew heavily from Gandhian principle of nonviolence in his own civil rights activism.

Aiming to promote Gandhian philosophy in a big way, the Culture Ministry with the Government of Gujarat is set to develop Gandhi heritage sites across the country. The Dandi Heritage Corridor Project to commemorate Mahatma Gandhi’s Dandi Yatra and other places associated with Gandhiji are being promoted to attract visitors. The 21 places along the 349 km long Sabarmati-Dandi route where Gandhiji had made night halts during the historic Dandi yatra from March 12 to April 6,1930, will also be developed. There will be simple huts with basic facilities at these night halts. The ambiance will be simple and frugal because the basic aim is to feel the Gandhian way of living.
The night halts along the route include Nadiad, Anand, Navsari and the bank of Tapti near Surat are to be developed. There will be memorial stones at these locations with his speeches engraved on it. Besides, a sidewalk along the route will also be developed for the people who may want to replicate the Dandi March.

Government of Gujarat is also taking the initiative of preserving and protecting some trees like mango, banyan trees which were part of Gandhi’s journey during the freedom struggle.

Summing up the webinar D.Venkatesan , Deputy Director General said that the legacy of Mahatma Gandhi, is perfectly preserved in India. From various museums and memorials to Gandhiji’s ashram, there are various stopovers in the country that testify the great life of the leader. His philosophies of truth and non-violence to inspire millions and many people trace his footsteps by visiting the various monuments dedicated to him. Gandhiji’s contribution to human development is far too great and varied to have been forgotten or overlooked. The world today recognises him as a far more compelling social innovator than humanity ever realised.

Dekho Apna Desh Webinar Series is an effort to showcase India’s rich diversity under Ek Bharat Shreshtha Bharat.The Series is presented in technical partnership with National e Governance Department, Ministry of Electronics and Information Technology. The Sessions of Webinar are now available on the https://www.youtube.com/channel/UCbzIbBmMvtvH7d6Zo_ZEHDA/featured and also on all social media Handles of Ministry of Tourism, Government of India.

SP Jain Global Rated No. 1 among all Higher Education Providers in Australia for…