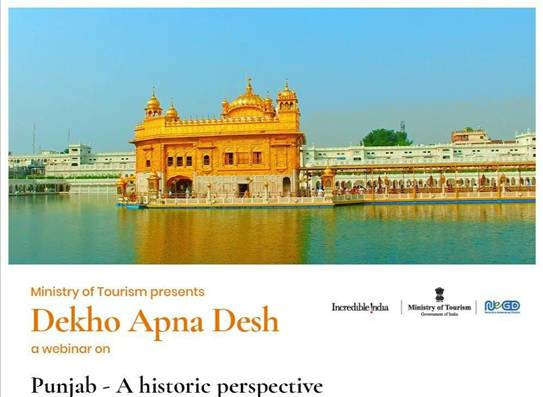 New Delhi: The Ministry of Tourism’s DekhoApnaDesh Webinar series titled “Punjab- A historic perspective” on 05th September 2020 took the participants on a journey through the history and prominent tourist places in the state with focus on Virasat-e- Khalsa Museum, an architectural marvel commemorating the 550-years of culture and tradition of Punjab and Sikhism and the Partition Museum-world’s first museum on the largest human migration. DekhoApnaDesh Webinar Series is an effort to showcase India’s rich diversity under Ek Bharat Shreshtha Bharat programme.

Mr. Jaswinder Singh started the presentation with the meaning of Punjab as ‘the land of Five Waters’ referring to the rivers Jhelum, Chenab, Ravi, Sutlej, and Beas. Much of the Frontier was occupied by Maharaja Ranjit Singh also known as Sher-e-Punjab in the early 19th century, and then taken over by the East India Company when it annexed the Punjab in 1849.

The State of Punjab is divided into three parts- Majha, Doaba and Malwa. Punjab’s many festivals–Teej, Lohri, Basant Panchami, Baisakhi and Hola Mahalla to name some are celebrations that mirror the farming ethos. Indeed, Bhangra, the traditional dance of Punjab revolves around, and replicates a farmer’s daily life. Historically, Punjab has played host to a number of ethnicities, including the Aryans, Persians, Greeks, Afghans and Mongols, thus bestowed with a rich tangible heritage. Popular dance forms of Punjab are Bhangra and Giddha.

The southeastern city of Punjab, Patiala was once a princely state established under Baba Ala Singh, a Jat Sikh chieftain. He laid the foundation of the fort and now, is located in the region around Qila Mubarak or the Fortunate Castle.Important tourist attractions are Kali Temple, Baradari Garden, Sheesh Mahal, GurudwaraDukhNiwaran Sahib, Qila Mubarak complex etc. Patiala is famous for pug (Shahi Turban), Jhooti and Patiala Peg.

The most sacred of Sikh shrines, the Golden Temple, is a major pilgrimage destination for devotees from around the world, as well as, an ever increasing popular tourist attraction. Construction of the AmritSarovar (pool of nectar) was initiated by Guru Amar Das, the third Guru, in 1570 and was completed by Guru Ram Das, the fourth Guru. His successor, Guru Arjan Dev began work on the building after inviting Mian Mir, the Sufi saint, to lay its foundation stone in 1588. Three years later, the Harimandar Sahib, or Darbar Sahib got completed. In step with Sikhism’s basic tenet of universal brotherhood and all-inclusive ethos, the Golden Temple can be accessed from all directions. Important tourist attractions are JallianwalaBagh, The Partition Museum, Gobindgarh fort and Wagah border.

The concept of langar in Gurdwara is famous where a free meal is served to all the visitors, without distinction of religion, caste, gender, economic status or ethnicity. Food is also served in Dhaba and the famous cuisines are butter chicken, butter naan, shahibartha, maaki dal, Tandoori chicken, Lassi etc.

The city of Fatehgarh Sahib is of special significance to Sikhs.The word “Fatehgarh”, means “Town of Victory”, and is so called because in 1710, Sikhs under the leadership of Baba Banda Singh Bahadur conquered the area and destroyed the mughal fort. Banda Singh Bahadur announced the establishment of Sikh rule in the city and an end to the tyranny of the Mughal rule which had spread terror and injustice.

Todar Mal, a devotee of Guru Gobind Singh Ji, managed somehow to do the cremation of the two younger sons of Guru Gobind Singh Ji named SahibzadaFateh Singh (less than five years old -born in 1699) and SahibzadaZorawar Singh (just over eight – born in 1696) who were slained by the Mughal authorities for not renouncing their faith It is estimated that at least 78000 gold coins were required to buy the required land, only enough land on which to perform the last rites. The diwan produced the coins and bought the piece of land he needed for the cremation. He had to literally ‘carpet’ the piece of ground in gold coins. He cremated the three bodies and put the ashes in an urn which he buried in the land he had bought.

Ms. LipikaGuliani presented Virasat E Khalsa- The Virasat–e-Khalsa in Anandpur Sahib which begun in 1999 to commemorate the third centenary of the founding of the KhalsaPanth(Sikh nation) by Guru Gobind Singh. Spread across 6,500 sq m, the recently opened Viraasat-e-Khalsa museum tells a memorable story of both Punjab and Sikhism, using hand-crafted artifacts and the latest technology. Designed by acclaimed architect Moshe Safdie, this story-telling repository is the first of its scale in the world, and has been envisioned as the world’s largest cultural and historical museum dedicated to a single community. Conceived as two functionally integrated sets of buildings, the Western complex, forming the gateway for the town provides pedestrian access to the Eastern complex over a 165-metre bridge. A series of reflecting pools create an expansive water body between the two complexes with arcaded walkways and gardens on either side. Public facilities and a cafeteria are located at the base of the bridge.

Ms.Kishwar Desai presented the Partition Museum which is five minute walk from the Golden temple. The Partition of India has been one of the most defining events in the history of the subcontinent. It was the largest migration in human history and upto 20 million people were affected. Despite the extensive loss to life and property, 70 years later there existed a severe lacuna that no museum or memorial existed anywhere in the world to remember all those millions. The Partition Museum or People’s Museum aims to fill this void and tell the story through the voices of those who live through the times. The Museum was opened on 17th August 2017.When the museum was opened in 2017, lot of people came forward to share their stories, letters, artefacts etc.

Summing up the webinar RupinderBrar , Additional Director General stressed on the importance of travel and explore destinations, cuisines, culture and heritage.

The DekhoApnaDesh Webinar Series is presented in technical partnership with National e Governance Department, Ministry of Electronics and Information Technology. The Sessions of Webinar are now available on the https://www.youtube.com/channel/UCbzIbBmMvtvH7d6Zo_ZEHDA/featured and also on all social media Handles of Ministry of Tourism, Government of India.