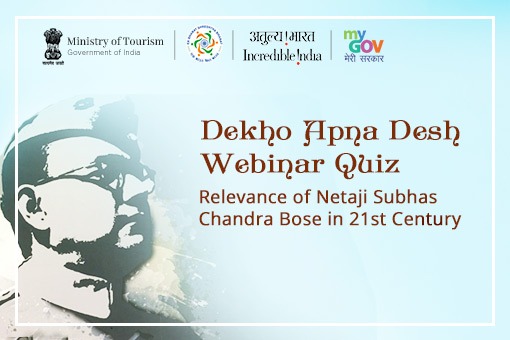 New Delhi: The Ministry of Tourism’s Dekho Apna Desh Webinar series held its 73rd webinar titled “Relevance of Netaji Subhas Chandra Bose in 21st Century” on 22nd January 2021. The webinar was presented by Shri Chandra Kumar Bose, the Spokesperson and Convener of the Open Platform for Netaji.  Shri Chandra Kumar Bose has worked on social issues and is associated with Indian Socialist Democratic Forum (ISDF), an organisation conducting awareness programmes for the people on Human Rights in India. He has been associated with Netaji Subhas Foundation (NSF) operating out of Kolkata and London. NSF is a Research institute involved with unravelling the story of the Azad Hind Fauj and Netaji Subhas Chandra Bose.

The country is commemorating the 125th Birth Anniversary year of Netaji Subhas Chandra Bose on 23rd January 2021. The Government has decided to observe this day as “Parakram Diwas’ every year. This webinar held on 22nd January as a tribute to the life and the contribution Netaji made to India’s freedom struggle. The Philosophy, Ideology &the Vision of Netaji Subhas Chandra Bose for united & progressive India where the main concern and objective was liberating India from British rule, exploitation and oppression along with thrust on overall development of India on social, economic and political front.

Ministry of Tribal Affairs and Microsoft sign MoU on Joint…

PM Narendra Modi thanks the medical fraternity for the…

The Dekho Apna Desh Webinar Series is presented in technical partnership with National e Governance Department, Ministry of Electronics and Information Technology. The Sessions of Webinar are now available on the https://www.youtube.com/channel/UCbzIbBmMvtvH7d6Zo_ZEHDA/featured

and also on all social media Handles of Ministry of Tourism, Government of India.

The Dogs Didn’t Sleep Last Night tells the story of four different lives which get intertwined with each other: Director Ramin Rasouli