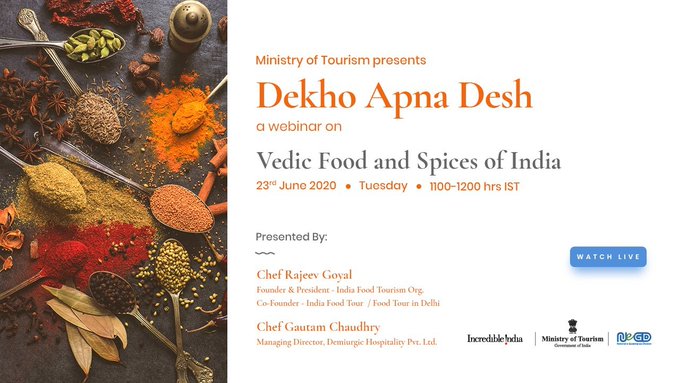 New Delhi: To showcase the fruitful benefits about our country’s ancient form of health science, Ministry of Tourism presented a webinar on ‘Vedic Food and Spices of India’ under Dekho Apna Desh webinar series. The webinar focused on the importance of Vedic food and spices of India which remain unexplained to the world and never bridged to modern world cuisines. This session attempted to decode myths about some foods and present the secret of spices and the technique of preparations in order to inspire the traveller to come, explore and experience the original. Dekho Apna Desh Webinar Series is an effort to showcase India’s rich diversity under Ek Bharat Shreshtha Bharat.

The 37th session of Dekho Apna Desh webinar series on 23.06.2020 was presented by Chef Rajeev Goyal, founder & president of India Food tourism.org, co-founder of India Food Tour/ Food tour in Delhi and Chef Gautam Chaudhry, Managing Director, Demiurgic Hospitality Pvt. Ltd. They virtualised and highlighted the importance of being conscious about food and spices that help to improve functioning of internal organs.

Opening the presentation, Chef Rajeev Goyal said that the treasure of Indian culture is much bigger and larger in the form of Vedic food and spice we have and how all the Veda’s (Scriptures) have about well being or what and how we should eat or maintain body. He highlighted the significant amount of food knowledge contained in Rig an Yajur Veda . References were also made to the Vedic literature which throws considerable light on the food and drinking habits of the people. Chef Goyal also gave examples of how food rich in various macronutrient were eaten by different sections of the society.. The panelist explained the method of usage of lubricant as per Vedas. The best way to do tadka is in cold pan by adding ghee/butter followed by seeds and then chillies and rest of the spices and then switch on the flame.

The panelist also spoke about the importance of cookware. The goodness of cooking in the Earthenware was highlighted as food prepared in these vessels retains its natural flavour and keeps one grounded. The heat is also evenly spread and maintained. Copper pot has very good medicinal properties and no bacteria would survive. Iron pan are rich in minerals and food cooked is tasty.

The presenters also made references to three doshas (body elements) in Ayurveda, which describe the dominant mind/body state: Vata, Pitta, and Kapha. While all three are present in everyone they explained how Ayurveda proposes that each individual has a dominant body element that’s unwavering from birth, and ideally an equal (though often fluctuating) balance between the other two.

Sony YAY! brings leading musicians of the country together…

The session also imparted the knowledge of cooking pans and how use of them helps in maintaining the balance. The merit of pans made with various metals was also stressed like how food from silver vessel cools down the body, relaxes and rejuvenates it. Food cooked in Copper and Brass vessel help in increasing the immunity level and metabolism. Betel leaves also help in controlling the doshas.

The importance of various food and its health benefits was also shared like how any fat that melts in the palm is good for the body. Fruits are better than juices and though refined flour digest faster but it is not good and its flour with zero nutrients. As per the Vedic food Science, it is strongly advised to eat water rich vegetables and fruits like melon, watermelon, grapefruit, radish etc as it keep the body temperature balanced, less frequent urination which means body need not retain temperature etc.

Chef Gautam Chaudhry shared the recipe of Green Gram Khichdi and conducted a live cooking demonstration of this Khichdi for the viewers to see and learn. He shared the importance of spice like cumin, turmeric, pepper etc. The importance of Green gram was also explained. Similarly the benefits of using turmeric in daily cooking was also highlighted especially the ability of turmeric in cleaning the water, being antifungal, anti bacterial and good for immunity. That is why the recovery rate of Indians is faster compared to the world statistics.

The next Dekho Apna Desh webinar on 25th June 2020 at 1100 hrs IST is on ‘Indian Motoring Expeditions ‘ (Diving Holidays) Registrations open at https://bit.ly/MotoringExp

Sony YAY! brings leading musicians of the country together to wield the power of…