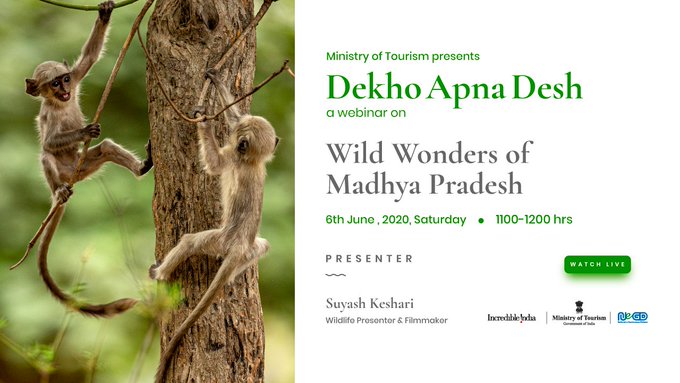 New Delhi: To showcase the mesmerizing natural beauty and eco-system of Madhya Pradesh, Ministry of Tourism presented a webinar on ‘Wild Wonders of Madhya Pradesh’ under Dekho Apna Desh webinar series. The webinar provided an immersive virtual safari experience to one of the most biodiversity rich hotspots in the world: The State of Madhya Pradesh, which is also known as the heart of Incredible India.

The 29th session of the Dekho Apna Desh webinar series on 06th June,2020 was moderated by Ms. Rupinder Brar, Additional Director General , Ministry of Tourism and was presented by Mr. Suyash Keshari, a young wildlife filmmaker who was born and brought up in Madhya Pradesh and worked extensively on its wildlife. Dekho Apna Desh Webinar Series is an effort to showcase India’s rich diversity under Ek Bharat Shreshtha Bharat

Madhya Pradesh is an amalgamation of natural wildlife, history and mythology. Suyash began this enchanting journey with Bandhavgarh National Park which is also known as tiger’s heaven. This national park captures the scenic beauty of around 32 hills. Bandhav means brother and Garh means fort, which revolves around the mythological story of Lord Ram who gifted the fort (which is situated at the top of the national park) to his brother Laxman and that’s how this national park got its name as Bandhavgarh National Park.

Apart from the tigers, this national park is a home for many other wonderful species such as butterflies which are smaller than a thumbnail and Indian Bison which is one of the largest bovine species in the world. Influenced by the natural habitat of Bandhavgarh National Park, a group of elephants migrated from Odisha to this national park and are living here since October, 2018.

Mr. Suyash also acknowledged some interesting facts about the tigers such as determining a tiger’s age by his nose colour- the pinker the nose, the younger will be the tiger. Apart from Bandhavgarh National Park, there are other places in the heart of India that are showcasing the bio-diversity of our country such as Sanjay Dubri National Park, Panchmari Biosphere Reserve which is famous for its scenic views and waterfalls. Satpura National Park which is the only national park in India where walking safari is permitted.

Apart from the natural bio-diversity Madhya Pradesh is also home to many UNESCO World Heritage sites such as Bhimbetka Rock Shelters, Sanchi Stupa and Khajurao Group of temples which is next to Panna Tiger Reserve. One can also witness the endangered species such as Gharial at the unexplored Son river & National Chambal River Sanctuary.

The lifestyle of the people living around the areas of National Parks and Bio-sphere reserves in Madhya Pradesh can be a great learning for all as they respect the wildlife and the space of animals that also leads to sustainable change and conservation of these natural wonders and humanity. The Community participation helps to uphold the local culture, tradition and indigenous knowledge of the local people which further helps in conservation of the environment and culture of the local community.

Ms. Rupinder Brar in her concluding remarks spoke about Ministry of Tourism’s Incredible India Tourist facilitator certification programme which will also act as an enabler for transforming a local citizen with no specified skills having proficiency in a regional language into a potential bread earner for their households. This will further help citizens to own up the niche tourism products and show it to the visitors. To register, please log on to https://iitf.gov.in/login/signup.php

Considering the impact of COVID-19 on tourism, Madhya Pradesh tourism has initiated a concept of rental caravan vehicles comprising of all the facilities such as beds, refrigerator and other essentials so that people doesn’t need to stay in hotels for their trips in view of social distancing and can rent these vehicles.

The National e-Governance Division (NeGD) created by the Ministry of Electronics & Information Technology (MeitY) has been playing a pivotal role in supporting the Ministry in conducting of the Dekho Apna Desh Webinars by providing technical assistance directly with a professional team thereby ensuring effective citizen engagement and communication with all stakeholders using the digital experience platform.

Stay tuned for the next webinar showcasing the Tribes of Chattisgarh on 9th June,2020. The sessions of webinars are now available on the https://www.youtube.com/channel/UCbzIbBmMvtvH7d6Zo_ZEHDA/featured and also on all social media handles of Ministry of Tourism, Government of India.

The next Dekho Apna Desh webinar on 9th June will showcase Hidden Treasures of Chhattisgarh Participants can register here at : https://bit.ly/ChhattisgarhDAD