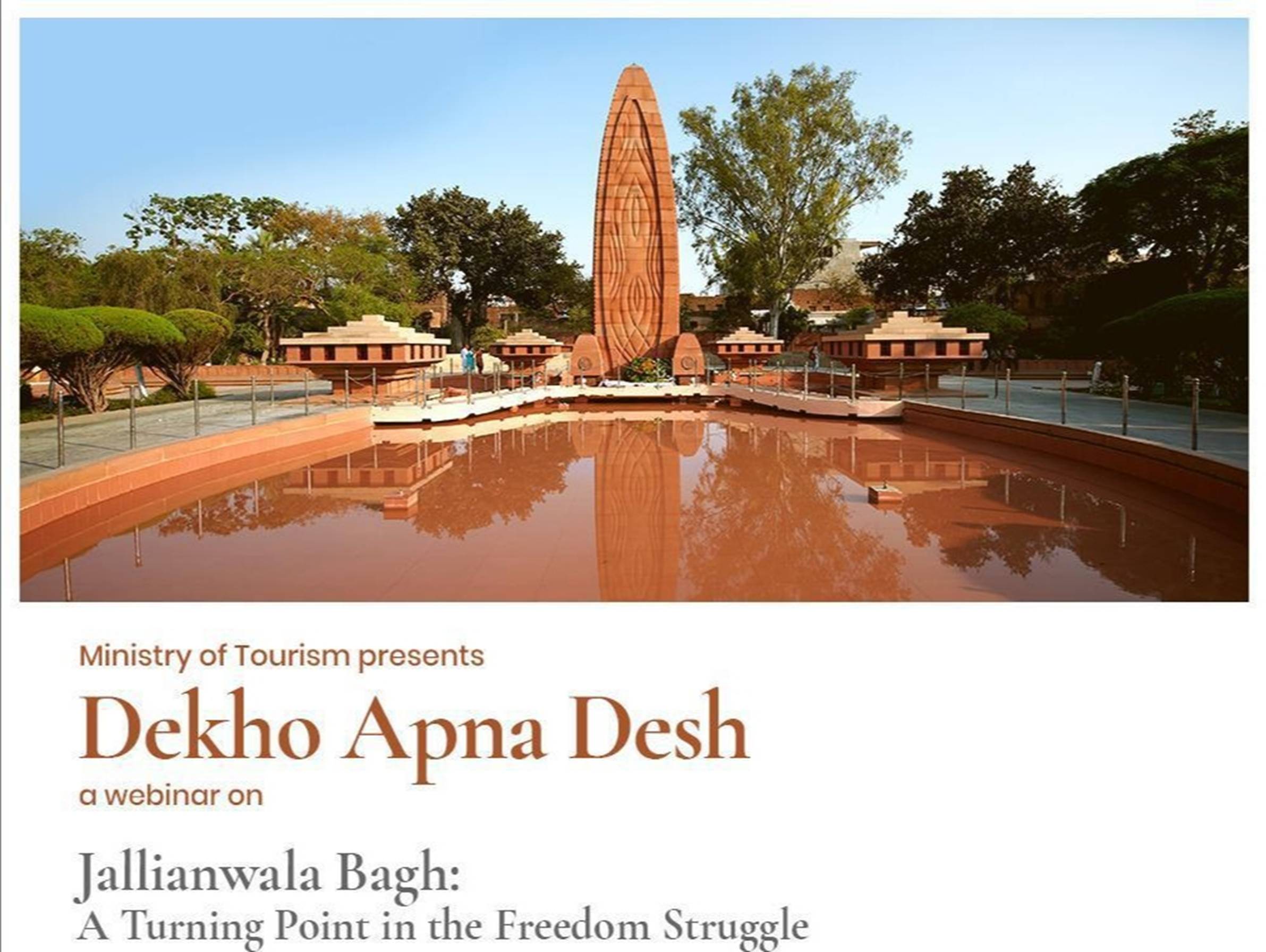 New Delhi: Ministry of Tourism presented overall 48th and 4th Independence Day themed Webinar on Jallianwala Bagh: A turning point in the Freedom struggle under Dekho Apna Desh Series as a run up to the Independence Day Celebrations.

The 48th in the series of Dekho Apna Desh webinar was presented by Ms. Kishwar Desai, Chairperson, The Partition Museum/ The Arts and Cultural Heritage trust and author of the book; Jallianwala Bagh 1919, the real story. Ms. Desai narrated the horrific act that resulted in the killings of hundreds of innocents and how the mass slaughter later united the entire country to fight against the British raj. Dekho Apna Desh Webinar Series is an effort to showcase India’s rich diversity under Ek Bharat Shreshtha Bharat.

Giving the background and conditions on ground during this period , Ms. Desai touched upon how, during World War I, Indian soldiers were fighting for the British in foreign land and Bengal and Punjab remained sources of anti colonial activities. Revolutionary attacks in Bengal, associated increasingly with disturbances in Punjab, were significant enough to nearly paralyse the regional administration. Influenza pandemic in India between 1918 and1920 lead to millions of people losing their life. A lot of soldiers were not recruited in a democratic way and some of them recruited forcibly started showing resentment. Following the outbreak of World War I in 1914, some Ghadar party members returned to Punjab to incite armed revolution for Indian Independence. Ghadarites smuggled arms into India and incited Indian troops to mutiny against the British.

Ms. Desai gave an overview of the political & social conditions in Amritsar and rest of India prior to the Jallianwala Bagh massacre. She touched upon the The Rowlatt Act or Black Act which was a Draconian Act passed by the British Government which gave powers to the Police to arrest any person without any reason whatsoever. The purpose of the Act was to curb the growing nationalist upsurge in the country. Gandhi called upon the people to do Satyagraha against such oppressive “Act”.

She narrated how Jallianwala Bagh was then a barren land where people would meet often and use to have peaceful protest. This made the British nervous as they had never seen any resistance. Dr. Saifuddin Kitchlu and Dr. Satyapal were renowned national leaders of the city of Amritsar. They organized Satyagraha against Rowlatt Act. People from all sects participated in peaceful gatherings that happened in Jallianwala Bagh. This led to lot of misconceptions and misunderstanding among the Britishers. The British Government ordered the arrest of Dr. Kitchlu and Dr. Satyapal. The news of their arrest evoked strong reaction among the people of Amritsar.

On 9th April 1919, Mahatma Gandhi was arrested and people were unable to understand the reason behind the arrest. When news of Gandhi’s arrest reached Amritsar on the 10th, a large and angry crowd collected on the streets. British banks were set on fire and three bank managers murdered. The violence continued through the 10th and 11th April. With the police unable to control the crowds, the city was placed under de facto martial law. The Collector handed over charge to Brigadier-General Reginald Dyer, who had come with a contingent of Gurkha and Pathan troops.

The Martial Law regime in Punjab was extremely harsh. The mail was censored. Temples and mosques were closed to worshippers. Water and electricity was cut off from homes of those whose political affiliations were suspect. Worse still were public floggings of select rebels; and an order making it mandatory for all Indians to crawl along the street that had witnessed the attack on the woman missionary.

On Sunday, 13 April 1919 Dyer, anticipated that a major insurrection could take place, thus had banned all meetings. This notice was not widely disseminated, and many villagers gathered in the Bagh to celebrate the Indian festival of Baisakhi, and peacefully protest the arrest and deportation of two national leaders, Satyapal and Saifuddin Kitchlew. Dyer and his troops entered the garden, blocking the main entrance behind them, took up position on a raised bank, and with no warning opened fire on the crowd for about ten minutes, directing their bullets largely towards the few open gates through which people were trying to flee, until the ammunition supply was almost exhausted. Some 1,650 rounds were fired. Many young children were killed and only two bodies of women were found. Head count of the number of deaths was taken after three months. It was a huge massacre and over 1000 people were killed. No help in the form of medication was provided to the wounded people. Local Indian Doctors attended.

On 13th April 1919, the British government put most of the Punjab under Martial Law. The legislation restricted a number of civil liberties, including freedom of assembly; gatherings of more than four people were banned. The British Government established a Committee to inquire into the events, and the Hunter Commission Report includes evidence taken in relation to the events in Amritsar. In the final report submitted in March 1920, the Committee unanimously condemned Dyer’s actions. However, the Hunter Committee did not impose any penal or disciplinary action against General Dyer.

Rabindranath Tagore renounced his knighthood in protest and Mahatma Gandhi gave up the title of Kaiser-i-Hind, bestowed by the British for his work during the Boer War.

Ms. Rupinder Brar in her concluding remarks spoke about the sightseeing itineraries in Amritsar which is well connected by air, rail and road. Jallianwala bagh, The Partition Museum, Harmandir Sahib, and Wagah bordermarks the boundaries between Indian and Pakistani borders, running along the Grand Trunk Road. The Wagah Border Ceremony or the Beating Retreat Ceremony, held every day before sunset, is the prime attraction. Every evening, just before sunset, the soldiers from the Indian and Pakistan military meet at this border post to engage in a 30-minute display of military camaraderie and showmanship. The visitor also gets an opportunity to enjoy the amazing food in Dhabas.

Ministry of Tourism under its various schemes of is giving due emphasis for development of tourism infrastructure and facilities. Presently, Jallianwala Bagh is being renovated, upgraded and museum/galleries and Sound & Light show is being set up at the memorial site.