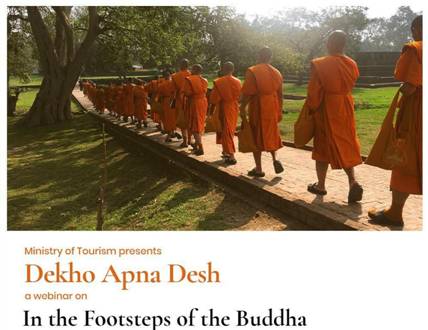 New  Delhi:   India is deeply associated with Buddhism. The footprints of this religion in the middle land of India are famous, and are worldwide known as the Buddhist circuit of India. Buddhism and sites related to the life of Lord Buddha are plenty and spread all over India forming a destination in themselves. Buddhists living in different countries all over the world have a natural desire to visit places related to life and teachings of Buddha.

The Ministry of Tourism’s latest webinar under Dekho Apna Desh Webinar series titled “In the Footsteps of the Buddha” on 12th September 2020 focused on the truth of overcoming suffering and bringing happiness to the individual, family and society by Shakyamuni Buddha. Before the mortal body, the Buddha had suggested that it would be of great benefit to those who are interested in his teachings to make a pilgrimage to the places associated with his life. Dekho Apna Desh Webinar Series is an effort to showcase India’s rich diversity under Ek Bharat Shreshtha Bharat.

Presented by Shri Dharmacharya Shantum, Guiding teacher/founder Buddhapath/Ahimsa Trust guided the participants of the webinar on a virtual journey across the plains of the river Ganges to Bodh Gaya, where the Buddha attained enlightenment, meditation places such as Vulture peak in Rajgir, the Jeta Grove at Sravasti (where he spent 24 rainy season retreats), the site at Kapilavastu where he spent his childhood, the Deer Park at Sarnath, where he gave his first teachings and Kushinagar, where he passed away. Dharmacharya Shantum shared the stories of the Buddha’s life and teachings to help us understand the Buddha as a human being, his life and the significance of what he taught.

No written records about Gautama were found from his lifetime or from the one or two centuries thereafter. But from the middle of the 3rd century BCE, several Edicts of Ashoka (reigned c. 269–232 BCE) mention the Buddha, and particularly Ashoka’s Lumbini pillar inscription commemorates the Emperor’s pilgrimage to Lumbini as the Buddha’s birthplace, calling him the Buddha Shakyamuni.

The Buddha was born into a noble family of the kshatriyas in Lumbini in 563 BCE according to Buddhist tradition. He was called Siddhartha Gautama in his childhood. His father was king Śuddhodana, leader of the Shakya clan in what was the growing state of Kosala, and his mother was queen Maya Devi. He was raised by his mother’s younger sister, Mahapajapati Gotami, after his mother died just seven days after childbirth.

The earliest accounts of the Buddha’s spiritual quest are found in texts such as the Pali Ariyapariyesana-sutta. This text shows that what led to Gautama’s renunciation was the thought that his life was subject to old age, disease and death and that there might be something better (i.e. liberation, nirvana). This was at the age of 29 when he was confronted with impermanence and suffering. Moved by all the things he had experienced, he decided to leave the palace in the middle of the night against the will of his father, to live the life of a wandering ascetic.

According to early Buddhist texts, after realising that meditative dhyana was the right path to awakening, Gautama discovered “the Middle Way”—a path of moderation away from the extremes of self-indulgence and self-mortification, or the Noble Eightfold Path. His break with asceticism is said to have led his five companions to abandon him, since they believed that he had abandoned his search and become undisciplined. Walking down the hill he collapsed and accepted milk and rice pudding from a village girl named Sujata.

He met many talented meditation teachers and mastered their techniques. Always he found that they showed him mind’s potential but not mind itself. Finally, at Bodhgaya, the future Buddha decided to remain in meditation until he knew mind’s true nature and could benefit all beings. After spending six days and nights cutting through mind’s most subtle obstacles, he reached enlightenment on the full moon morning of May, a week before he turned thirty-five. At the moment of full realization, all veils of mixed feelings and stiff ideas dissolved and Buddha experienced the all-encompassing here and now.

Immediately after his awakening, the Buddha hesitated on whether or not he should teach the Dharma to others. He was concerned that humans were so overpowered by ignorance, greed, and hatred that they could never recognise the path, which is “subtle, deep and hard to grasp.” However, the god Brahmā Sahampati convinced him, arguing that at least some “with little dust in their eyes” will understand it. The Buddha relented and agreed to teach. Buddha reached the Deer Park (Sarnath) near Varanasi , where he met the group of five ascetics and was able to convince them that he had indeed reached full awakening.

The Buddha’s first sermon is called Dharma Chakra Pravartana or the Turning of the Wheel of Law. He spoke of his search for the reasons of human sorrow being our cravings and desires. He explained the four noble truths:-

The World is full of misery and suffering. The cause of this sorrow is desire and attachment. This suffering will cease when we extinguish desire. The path to end sorrow is through following the Noble Eightfold Path.” This is simple, ethical way of life that can end suffering. They are right view, right thought, right speech, right action, right livelihood, right effort, right mindfulness and right concentration.”

Sarnath- The Deer Park adjoining the Archaeological Complex at Sarnath that the Buddha is believed to have delivered his first sermon after he attained enlightenment under a Bodhi tree in Bodh Gaya. The reason for choosing Sarnath was that the five men who had accompanied Buddha on his journey of asceticism, and later abandoned him had settled in Sarnath. So when Buddha attained enlightenment, he felt that they should be the first one to know what he learned. So he proceeded to Sarnath and preached his first teachings known as Dharmachakrapravartana Sutra.

Sravasti- It was the capital of ancient Kosala kingdom and is sacred to the Buddhists because it is here that Lord Buddha performed the greatest of his miracles to confound the Tirthika heretics. These miracles include Buddha creating multiple images of himself, which has been a favourite theme of Buddhist art. Buddha showed his divine prowess to impress upon the non-believers. The Buddha passed the greater part of his monastic life in Sravasti.

Vulture peak- One of the several sites frequented by the Buddha and his community of disciples for both training and retreat.

Kesariya – Kesariya Stupa is a Buddhist stupa in Kesariya, located at a distance of 110 kilometres from Patna, in the Champaran (east) district of Bihar, India. The first construction of the Stupa is dated to the 3rd century BCE. Kesariya Stupa has a circumference of almost 400 feet (120 m) and raises to a height of about 104 feet.

Vaishali- It is said that the Buddha visited this place thrice and spent quite a long time here. The Buddha also delivered his last sermon at Vaishali and announced his Nirvana here.

Kushinagar- It is one of the four sacred places of Lord Buddha. Buddha delivered his last sermon, attained Mahaparinirvana (salvation) in 483 BC and was cremated at Rambhar Stupa.

Summing up the webinar Rupinder Brar , Additional Director General spoke about the IRCTC run Mahaparinirvana Express, famous Buddhist tourist train which got its name from Buddha’s final explanation of his teachings the Mahaparinirvana Sutra. It takes passengers on a journey which teaches them and helps them embrace both the roots and learning of Buddhism.

Buddhism is the religion practiced by an estimated 500 million plus people of the world and it is a huge number to market and bring them INTO THE FOOTSTEPS OF THE BUDDHA known as “Buddhist Circuit of India.”

The next webinar titled “Promoting Destinations with Authenticated Cuisines” is scheduled on 19th September 2020 at 11.00 am. Register in advance https://digitalindiagov.zoom.us/webinar/register/WN_6ydAovSPQtaSCTwzaaNwtw

Vice President calls for according equal respect to all Indian languages

iednewsdesk Apr 7, 2022
A new biodegradable gel improves the immune system’s ability to keep cancer at bay after tumors are surgically…